The Ascent Of Aluminium - Gulf Business 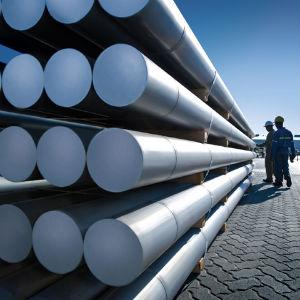 To pick a regional sector that has been a major success, you do not have to look much further than aluminium. The driving factors behind the regional smelting effort are a growing will to contribute to the international market, the increasing role for China as a producer and consumer, and the need to develop downstream activity in the region to promote new industries and jobs. However, fully developing the region’s aluminium sector is fraught with challenges.

Assessing the state of the global aluminium market is difficult. The International Aluminium Institute, Australian investment house Macquarie Group and other sources’ combined data forecast 2012 production at 47.4 million tonnes (mt) and demand at 44.4 mt. According to these figures, global aluminium is in slight deficit in 2011-12.

GCC analysis also points to a tight global market: “We estimate that… the Western world experienced a 381,000- tonne surplus [in 2011] that was more than offset by an apparent deficit of 440,000 tonnes in China,” the Gulf Aluminium Council’s February 2012 newsletter said.

Macquarie put global aluminium smelter capacity utilisation at 81.9 per cent in 2009 in the financial crash, increasing to 88.4 per cent this year and forecast it to rise to 92.9 per cent in 2015. “I don’t think we’ve reached a point where there is significant oversupply in primary aluminium in the global market,” says Sari Alabdulrazzak, consulting manager at Deloitte Middle East.

The Gulf Aluminium Council’s secretary general, Mahmood Daylami is more circumspect. He puts world production at around 41 million tonnes per annum (mtpa). He says the GCC is producing 3.5 mtpa which is around eight per cent of the global total, and expects its share to grow to five mtpa, or 10 per cent of a total of 45 mtpa worldwide in around 2020. “I would say the GCC’s share could reach 10 per cent, but after that I don’t know. The Saudis could double production if they had the gas. So could Oman.”

This explains the regional desire to add capacity that could see the GCC account for 15-20 per cent of global aluminium production within a decade. The volition is there, and cheap gas and labour are factors in the region’s favour, but as in so many other cases, the lack of ready access to gas could be a stumbling block.

But as long as regional governments put employment for locals first and guarantee gas allocations, the omens are good.

Aluminium is a niche industry, and only the truly committed need apply. Where global steel production stood at around 1.5 billion tonnes in 2011, according to Ernst and Young, global aluminium production was only less than three per cent of the physical mass of steel. In both cases, China is a key driver, accounting for a shade under half of global consumption. Pricing is also simple as daily London Metal Exchange values are used a benchmark worldwide.

GCC governments made a strategic decision as early as the 1970s to investigate the potential of aluminium. Bahrain’s ALBA (Aluminium Bahrain), blazed a trail, becoming operational in 1971. Dubai followed, bringing Dubai Aluminium, or Dubal, online in 1979, although it would be 20 years before its real potential would be achieved. The last four years have seen a flowering of the GCC’s potential, with Oman, Qatar, the UAE and Saudi Arabia bring urther assets to the table.

Technology transfer and training have always been vital. Most of the region’s aluminium smelters are owned by government interests, although the participation of Rio Tinto Alcan, Hydro Aluminum of Norway, and Aluminum Company of America (ALCOA) in various regional joint ventures has mitigated the need for outside expertise.

“Emal, the joint venture of Dubal and Mubadala, should see first production in 2014, when its potlines will be producing 1.25 – 1.3 mtpa. Sohar has one line and they are discussing expansion. Qatar will reach 580,000 tonnes next year,” he says. Emal’s size threatens to make it the largest single-site smelter in the world in competition with Russia.

Japan is the one of the main recipients of GCC ingots. The Chinese do not take much GCC product as they have several smelters of their own. Some 80 per cent of GCC production is exported directly as billets, while 20 per cent goes to the region’s downstream industry, of which only half stays onshore. That means cable manufacturers, rolling mills, although most of these businesses are outside the Gulf, and especially extruders, which bend and mould sheets of aluminium into shapes for like those for automobile doors and sinks.

The GCC is faced with the need to stimulate increased downstream demand. More of the same will not work, says Daylami. “Most extruders are not interested in big quantities of primary aluminium. New industries are required to cater to different demand, such as trains or cars,” he says.

Railways, which are undergoing massive regional investment from Kuwait to Oman, could work if a carriage manufacturing plant was set up in the Middle East, as these use up more primary aluminium than cars, but he admits that’s unlikely, as Europe would be a likelier location.

He says new industries, such as car engines, may be a good bet. “Mercedes and Jaguar use a lot of aluminium in the bodies of their cars. One Jaguar model is almost 100 per cent aluminium. Every kilogram of aluminium used in a car saves 20 tonnes of CO2 over a vehicle’s lifetime,” he says.

Analysts say that the financial crisis in Europe and the US is throwing into relief the cost advantages that the GCC enjoys compared to other parts of the world, and could lead to a reduction or idling of capacity in these “rust belt” locations.

“The region’s aluminium industry as a whole is conducive to investment given the availability and affordability of power and labour,” says Alabdulrazzak.

“In times when increasing costs [are] becoming critical for more and more primary producers around the globe, the Gulf presents a viable and attractive venue for investment in aluminium production across the entire industry’s value chain.”

On paper, the GCC has a real opportunity and is looking to increase production to seven million tonnes per year by 2020. “The GCC industry has plans to account for 15-20 per cent of global production in the next ten years,” he says.

It is all very well to talk about adding capacity, a prevalent theme in the GCC today, but the environmental impact assessments, the need for a skilled and talented workforce, the difficulty in providing cheap and abundant gas supplies to power the captive plants that usually run aluminium smelters, and the sheer challenge of producing a quality product, all militate against speedy progress for the world’s – and the region’s – aluminium industry.

It is tempting to think that aluminium is a real growth industry in the GCC with several large projects providing a base for rapid expansion. But it is simplistic to believe that the advent of rail projects or even massive construction efforts such as those seen in Dubai in the boom will see off a large proportion of GCC production in the near future.

“There is a lot of potential for downstream development because you have a lot of available domestic aluminium to tap into. It will happen: if there is potential in this market, they will be more than happy to support it,” says Alabdulrazzak. More downstream
business could include automobile spare parts or consumer electronics, he says. As GCC railways take off, there is a chance to direct aluminium their way.

“For railways, that mainly means power cables. You need companies to provide connectivity. But most of this is imported,” says Alabdulrazzak.

Daylami says the advent of rail projects might boost the sector, but only to th
e extent that an international carriage manufacturer imports GCC product, which is by no means inevitable.

Similarly, infrastructure projects like the 2022 World Cup are not a “killer application” for aluminium, and the truth is that probably the best hope for sales lies with electricity cable manufacturers.

Abu Dhabi and Sohar have plans to develop downstream, while Qatar is concentrating less on this. The new Khalifa Industrial Zone in Abu Dhabi (KIZAD) is predicated on several downstream players receiving molten aluminium. Daylami says its chances of success depend on the product.

Certainly, increased aluminium use in the region would be a healthy economic driver. The industrialised world uses 20kg per capita per year, China 12kg, Brazil 5kg, and Indonesia 2kg, says GAC.

There is less of an energy requirement for recycling aluminium scrap than for steel scrap. However, the aluminium scrap industry is dominated by traders into India and Indian Subcontinent.

“It’s a cash business. The margins are very small,” says Alabdulrazzak. “The regional recycling industry is not promoted because there are no in