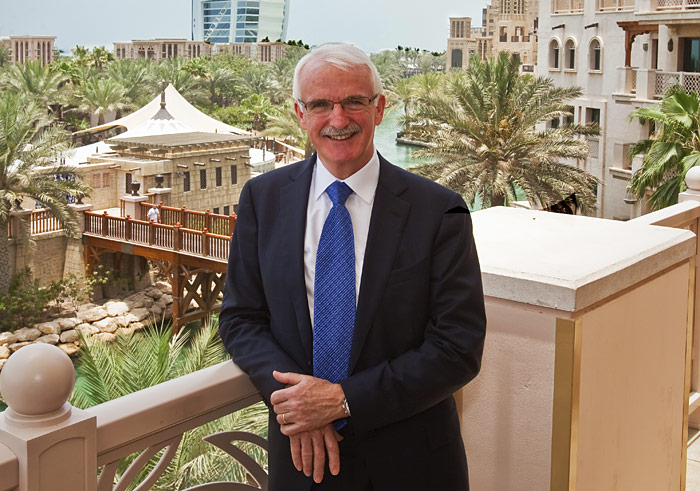 From the comfort of his swish office in Al Qasr, Gerald Lawless savours the panoramic view of an even more opulent development; the seven-star Burj Al Arab hotel that kicked off his 15-year career with the Jumeirah hospitality group.

“When we first opened Burj Al Arab, everybody said that it would never make money,” says the executive chairman. “But it’s been a huge commercial success and we like to think that it’s the symbol of Dubai.

“We know we have competition from another small tower down the road,” he chuckles, referring to the world’s tallest tower, Burj Khalifa. “But we think Burj Al Arab will continue very much as the symbol of Dubai.”

To position the entire Jumeirah Group as a symbol of Dubai and the UAE on the world stage has been the relentless endeavor of the Irishman.

Lawless began with the Dubai-based company in 1997, when Jumeirah had just started work on the Jumeirah Beach Hotel, Burj Al Arab and Wild Wadi.

“When you come in to take over such developments, you really do concentrate in the initial years on just getting these big businesses off the ground. Only after you get them to start working well do you become involved in looking further afield.

“So it was in late 2001 that we took over the Jumeirah Carlton Tower hotel in London. And we knew from then that we could really develop Jumeirah as a global hotel brand, which we are well on the way to achieving,” he says.

Jumeirah currently has about 51 hotels under development or in operation in cities across the world including London, New York, Shanghai, Istanbul and Rome.

And so far this year, most of those properties have a positive story to tell.

Figures for its portfolio in the UAE are more impressive, with occupancy rates of 79.8 per cent, ADR of Dhs2,235 and RevPAR of Dhs1,784. In Dubai alone, the company’s hotels saw RevPar rising 15 per cent year-to-date.

“Looking at future bookings, we feel that the strong performance will continue throughout the year,” says Lawless.

The chairman is especially confident about the group’s properties in Dubai, mirroring the positive sentiment of the emirate’s entire hospitality sector.

According to Dubai’s Department of Tourism and Commerce Marketing (DTCM), hotels in the emirate recorded a 24 per cent rise in revenues and a nine per cent increase in guest numbers during the first quarter of the year.

Hotels also saw a 22 per cent jump in guest nights and a 12 per cent rise in the average length of stay during the first three months of the year.

In terms of source markets, Saudi Arabia topped the list with 272,631 guests, followed by India, the UK, the US and Russia.

The positive results follow on the back of a record year in 2011, when Dubai welcomed more than nine million visitors and the industry made revenues of Dhs16 billion.

One of the key factors for this striking growth is that Dubai is constantly on the lookout for new markets, says Lawless.

“We attribute this to the expansion of Emirates and the great work they are doing in opening up new routes to Dubai. Who would have thought a few years ago that we would have direct flights to destinations like Sao Paulo, Rio De Janeiro and Buenos Aires?”

So now, if one market goes soft or levels off, there are always new ones coming in, he says.

But is this kind of growth sustainable over the long term? Especially since the city is set to add around 12,000 new hotel rooms in the next three years, according to hospitality consultancy STR Global.

“Dubai is very much a free market,” says Lawless. “So if investors feel confident to build hotels in Dubai, they are doing so because they are seeing that there is viability for the long-term growth of tourism into Dubai.

“I have been here since 1978, and it’s unbelievable if you look at where Dubai has moved since then. Even in the 1990s, people would say that we shouldn’t have any more hotels. If that had been the case, we wouldn’t have delivered what we have,” he states.

Currently, over 50 million passengers pass through the Dubai airport, while nine million stay in the emirate’s hotels.

“Even if we get another 10 per cent of that 50 million, we can get ourselves up to 14 million guests. So why shouldn’t we achieve the kind of targets that have been set?” Lawless questions.