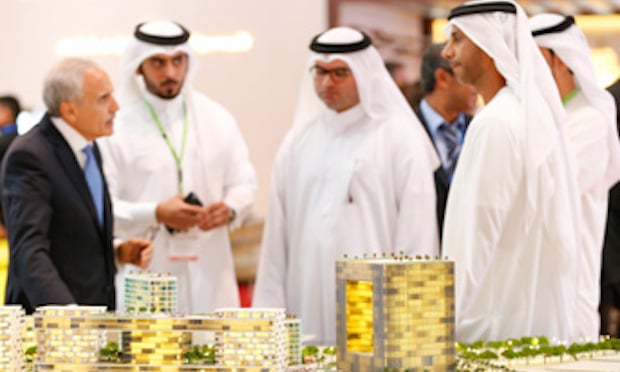 While insiders admit that the market is down, there seems to be confidence that an upturn can be expected very soon despite dull global economic conditions.

And with that we come to an end of our live blog for day one. We will have more updates and all the news from Cityscape again tomorrow. Stay tuned.

4.45pm The drop in property prices in Dubai is a “healthy correction” and has helped the emirate avoid a bubble, according to Nasser Amer, vice president of sales at Deyaar.

Developers are currently focussing on providing value for money and balancing demand in the market, he told Gulf Business.

While the company has not unveiled any new project at Cityscape, Amer confirmed that new launches could be expected end of this year and early next year.

“They will be mixed-use projects,” he added.

4.30pm Abu Dhabi based developer Eagle Hills (in which Emaar chairman Mohamed Alabbar is a board member) revealed details about its massive $700m project in Morocco’s Rabat at Cityscape.

The massive mixed-use project will include up to 2,000 residential units in total and will mainly seek to cater to local demand in the market, according to Eagle Hills Morocco general manager M’hammed El Merini.

The project will include a Fairmont hotel and residences project – the first by the hotel brand in Rabat. 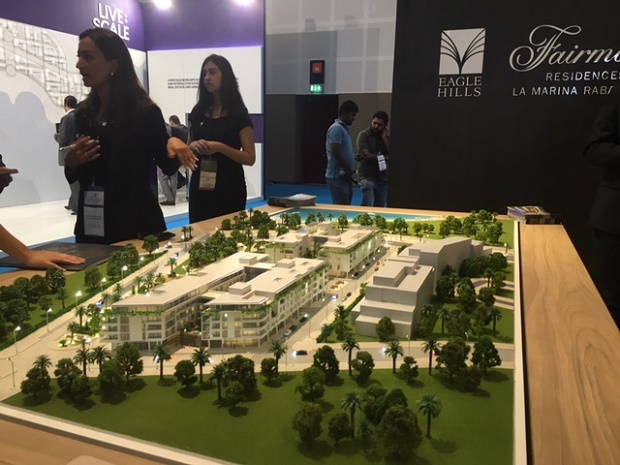 Consisting of 184 hotel rooms and 79 residences, the project is scheduled for completion in 2019.

4.05pm Things are finally beginning to slow down on day one of Cityscape following a busy day. Earlier, the UAE’s Vice President and Prime Minister and Dubai’s ruler Sheikh Mohammed bin Rashid Al Maktoum went around the massive exhibition and reviewed some of the projects.

3:50pm Dubai affordable developer Danube is due to finish its first property, the Dhs500m Dreamz, this year, with handover expected by early 2017.

Founder and CEO Rizwan Sajan said the company would continue to launch three to four developments annually with its next property to be officially revealed in October.

Although disclosing few details, he said the development (pictured) would be 35 floors high and located near Discovery Gardens. As before the target market will be the affordable segment. 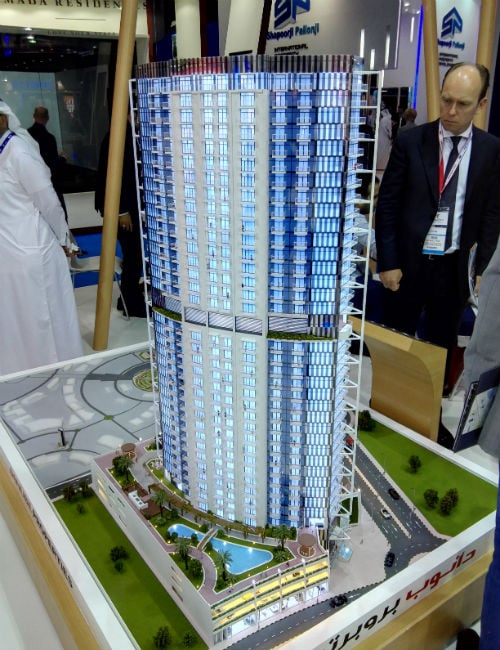 3:00pm Damac has been on something of a launch spree of late with 10 projects worth Dhs13bn launched this year before today’s announcement of The Residences and Aykon Hotel & Hotel Apartments at its Aykon City development.

Today the firm’s managing director Zaid El Chaar told Gulf Business the reason it had launched so many projects was simple, its developments were selling out.

Speaking more broadly, El Chaar said the market was backed by positive fundamentals but mortgage rules limiting the minimum deposit on a property worth under Dhs5m to 25 per cent were holding back buyers. He suggested a 35 per cent limit would help boost the market.

El Chaar also welcomed the introduction of visas on arrival for Chinese visitors suggesting this would boost investment from Chinese buyers.

2:45pm Moving on to the other end of the market, Forum Group managing director Anton Yachmenev has revealed more details of the company’s ultra luxury villa development on the Palm Jumeirah.

He suggested the properties, which feature European design and will be priced between Dhs40m and Dhs74m, were in a category that would not be impacted by a wider slump in the market this year.

Forum is planning to offer 24-hour concierge services, valet parking and even two-to three-year membership access to the nearby Zabeel Saray hotel as a sweetener for buyers when the villas are completed at the end of 2017.

Yachmenev also argued that much of the property advertised as “luxury” in the market “was not really luxury” by international standards and compared to Forum’s offering.

Sticking by that forecast today, the Cluttons team told Gulf Business that among the key challenges in the market is a lack of affordable property.

Head of research Faisal Durrani argued that most of the property being sold in Dubai is still far out of reach of residents, who with an average household salary of Dhs200,000 are limited to mortgages of three times that amount.

He suggested without action a situation like London was possible where residents are “priced out” of the market and forced to live in segregated communities.

12.45pm Despite all the talk about the Dubai property market slowing down, sales are going “strong”, according to local developer Dubai Properties.

“We are still seeing strong interest from investors for all our projects,” confirmed Marwan Al Kindi, executive director of Sales.

He also confirmed that the company’s high-end project launched last year, 1JBR, was preoceeding on track for delivery in 2019. “Sales was beyond our expectations last year and early this year although it slowed during the mid of the year,” he said. 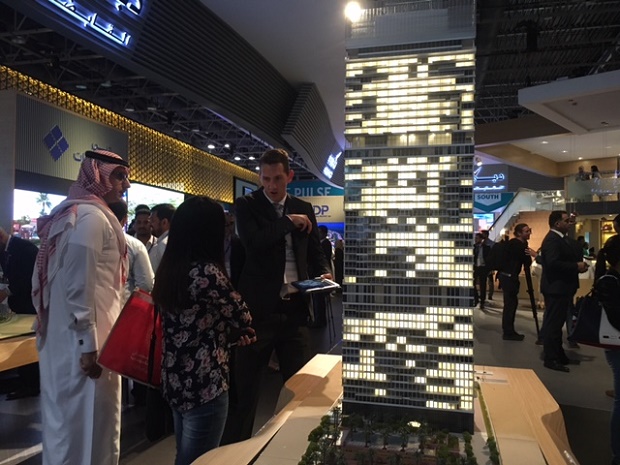 Al Kindi also revealed that the developer has seen strong interest for water homes in its recently launched Marasi Business Bay project. But he refused to disclose any price-point for the homes.

According to DP’s newly appointed group CEO Abdulla Lahej, the developer will continue to focus on “stabilising our portfolio.”

11:45am Dubai developer Omniyat is planning to launch a “very large mixed-use project in a superprime area”, according to managing director Mark Phoenix.

“For us this will be our next flagship and it will be certainly be something that no one has ever seen here,” he told Gulf Business, adding it would be revealed at the next Cityscape event.

Phoenix said the project would include hotel, apartment, office and retail space, while more broadly the developer could also announce a mid-market product next year.

11:30am This yellow striped building will apparently be the first to be completed at recently announced mega development Jumeirah Central. In a presentation announcers went through the key details of the project, saying the first phase would be completed by 2020. 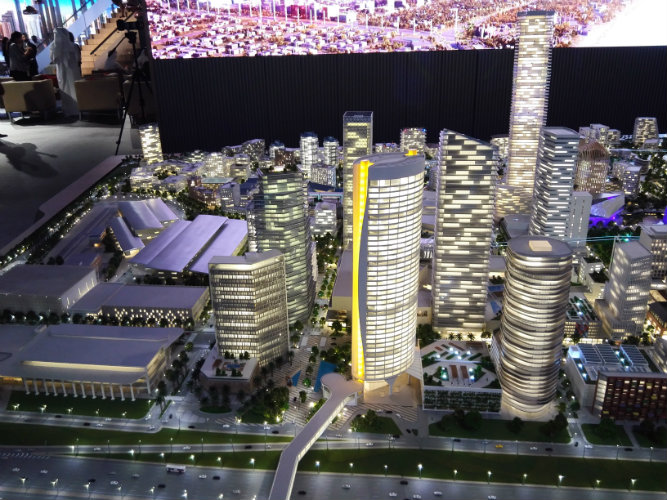 11.00am: The crowds have been pouring in at the World Trade Centre and the event is buzzing with excitement, with plenty of high profile exhibitions to take in.

As expected there is a lot of interest in Jumeirah Central, the vast new project announced on Sunday by Dubai’s ruler and UAE Vice President and Prime Minister, Sheikh Mohammed bin Rashid Al Maktoum.

9.30am: It’s that time of the year again when property developers in Dubai get the opportunity to showcase all that they are building (or hoping to build) and reassure investors that the real estate market is strong.

The annual Cityscape exhibition, taking place at the Dubai World Trade Centre from September 6-8, is expected to showcase hundreds of new projects over 41,000sqm of exhibition space.

The show is seeing strong interest despite a slowdown in the emirate’s property market. Experts predict that prices will also continue to drop.

But that has not stopped developers from announcing several new projects over the last few months (and this week in particular).

On Monday, Emaar launched a massive new golf community in Dubai South which is expected to have 15,000 homes.

All these and many more projects will be showcased at the exhibition and Gulf Business will be on the ground to get you the latest from the property world, where it is headed and what industry insiders predict for the future.