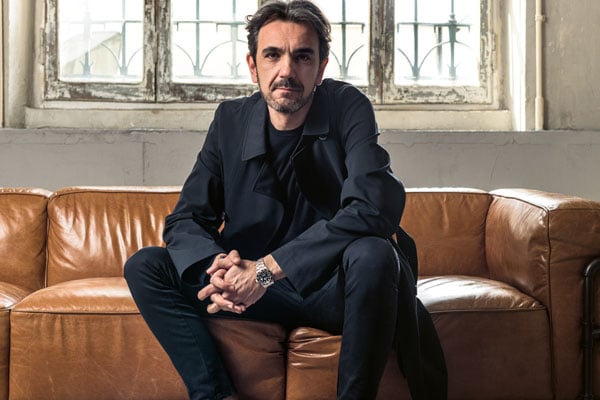 Milan’s Via Montenapoleone has for the last few decades been ground zero for some of fashion’s biggest names. It’s at the heart of this high-end shopping district where, for example, Giorgio Armani set up his very first store back in the seventies.

It’s in that fertile breeding ground of haute couture that Stefano Gaudioso Tramonte, the now general merchandising manager and style director at Italian menswear major Corneliani, came of age. As a youth he would navigate the street where his grandmother also had a fur atelier of her own, located right opposite Giorgio’s store.

“Giorgio was a friend of my grandmother. Everyone knew everyone on that street,” says Stefano when I meet him in Dubai during his visit to the city. 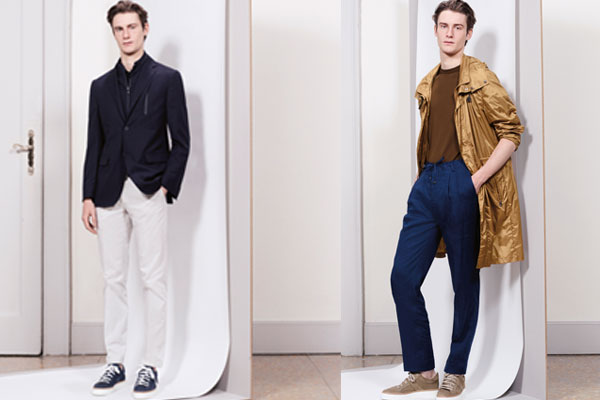 “At that time, everyone wanted fur. Gucci had a very big salon and did fashion shows there – we did fashion shows in our salon. The laboratory below our store had 12-15 women sewing and putting together the furs and I used to spend a lot of time downstairs playing with the scattered pieces.”

It’s fair to say that Stefano grew up in a sartorially inclined family. Apart from his grandmother, his own mother too insisted that he begin getting his suits tailored while he was still a child.

“When I was eight I started going to  a tailor by the name of Cicco Ricci, a Milanese guy, to make my jackets and suits. Getting a suit tailored involved doing  the half jackets without the sleeves, then picking the details like the lapel design and then coming back for three trials too – I was impressed by this process.”

All of these formative experiences, subliminally at least, served as a grooming process for Stefano’s career in fashion. After completing college in Switzerland, he briefly considered an alternative career outside of fashion. He joined as the general manager of a technology company in Switzerland, but quit within a year.

Returning to Italy, he got a job at  an Ermenegildo Zegna store. While the shop manager would spend much time explaining the technical aspects of menswear to Stefano, he insisted that Stefano remain occupied with back-end operations like working the stock room.

Without interfacing with customers, Stefano hadn’t really gathered the confidence of knowing whether he would indeed be able to make a successful career in this business. Fortuitously, he received his big break when the manager went on a week’s holiday.

“The manager was away on holiday and I had to start selling to customers,” he says. “That’s when I realised how easy it was for me to suggest to people how to dress. They would come in for a shirt and I would sell them a suit.

“I learnt during that time how to approach someone who was coming into the store, how to gauge his preferences and how to sell him something. That’s when I began to really believe that I had a career in this field.”

Gradually, Stefano rose through the ranks and his creative confidence began to swell even further. He started doing visual merchandising at stores around Europe and also became actively involved in product development.

After more than two decades in the menswear business, he finally landed one of the top jobs in menswear in 2016 when he was appointed as general merchandising manager and style director – in essence the creative director – at Corneliani. 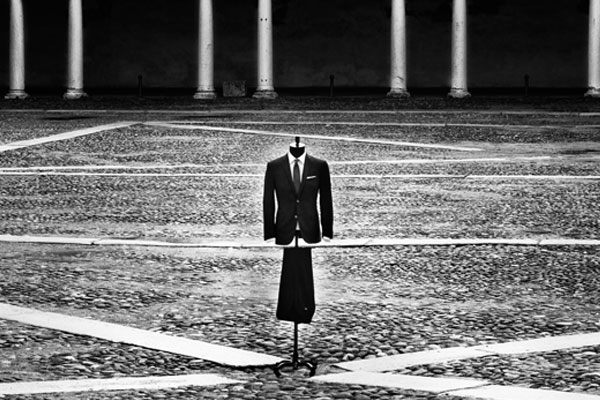 The history of Corneliani

The storied Italian menswear label can trace its roots back to the early thirties in Mantua, Italy. There, Alfredo Corneliani began by making raincoats and tailored overcoats. However, the advent of the Second World War meant that the business was forced to shutter and stayed that way until 1958 when his sons, Claudio and Carlalberto, decided to revive the brand.

Corneliani slowly grew in scale and expertise, moving their main manufacturing base to a large facility in Mantua, expanding into the American and Canadian markets, and opening up boutiques across the world. Today, the brand is present in 68 countries and employs around 1,500 people worldwide, with 600 of them being tailors, seamstresses and pattern makers in the Mantua factory.

Bahrain-based private equity firm Investcorp, who purchased half of Gucci back in 1993 before floating it, bought a controlling stake at Corneliani two years ago in a deal that reportedly valued the brand at $100m.

Following the takeover, a management shakeup saw Paolo Riviera being appointed as the new CEO at Corneliani and Stefano drafted in as the general merchandising manager.

Stefano wasted little time in finding his feet at Corneliani. In the two years he’s been  in the job, he’s pushed the brand towards a digital-first approach. In fact, two years ago he took the bold step of deciding to do away with the regular format of a fashion show and instead showcased his collection digitally.

Explaining that decision, he says: “We stopped doing fashion shows in 2016 because you put a lot of creativity and effort into it that one show that lasts for seven-to-nine minutes to impress only 400 people including press editors and fashion bloggers.

“You do a collection of, say, 22 wide pants so that it will look good on the ramp. But who is really going to wear something like that after the show?”

Instead of a fashion show, the company rolled out the ‘Corneliani to you’ digital campaign, which showcased the collection through four short films.

“We began the ‘Corneliani to you’ digital campaign with a very clear idea that instead of inviting all the journalists to see the collection, we would send the collection to their home or hotel, where they could view it on an iPad.”

Parallel to the digital push, Corneliani is also betting on the future of e-commerce, though not necessarily at the expense of its brick-and-mortar business.

“A customer can go to a store and touch and feel a jacket and then go home and order it online, or do it the other way around too. We expect it to grow more next year, but not to the extent where it will overtake our brick-and-mortar business,” he says.

The brand’s made-to-measure business is its next big stomping ground. A made- to-measure at Corneliani typically involves 150 steps, 27 of which require a pair of hands and aren’t automated. It also involves choosing from around 750 fabrics and weaves. Still, as Stefano admits, what the brand currently offers is similar to what the competition offers. But plans are afoot to change that.

“Made-to-measure has grown dramatically well for us in the last three months,” he explains.

“We want the made-to-measure to be recognised as a lifestyle, not just a service. The idea is to give to the customer the ability to fully customise their pieces be it custom embroidery, buttons, wider lapels, and so on.

“Currently, you go and select options from a standard model and then you can select the colour of the lining and lapel. But you cannot have, for example, a hand- painted lining with a skull, or you cannot select a different lapel on a certain model. If you want a different lapel then you’ll have to select an altogether different model.

“We are working on the technology and on a special production line in our factory that will allow hyper customisation. The other part of the made-to-measure business that we are refining is increasing the selection of very exclusive and high-end fabrics.” 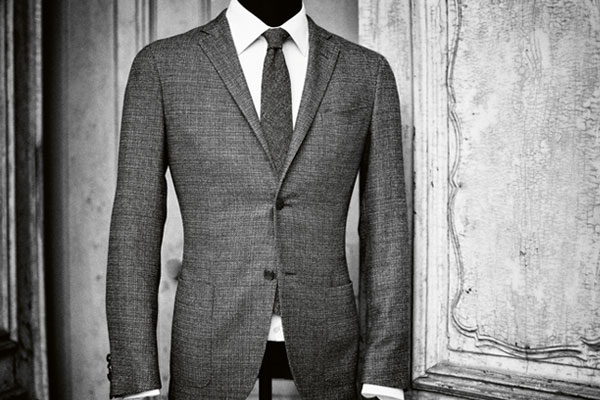 The ID Jacket – a single-breasted jacket with a detachable internal component, called a chest piece, which zips underneath it, is over a decade old but remains a signature piece from the Italian menswear specialist. Stefano is now keen to push those style codes even further and create new signature pieces for the brand.

To do that, he’s dug into the archives and is revisiting the very genesis of the brand by debuting a new collection of raincoats this summer.

For Corneliani, Stefano imagines a future where it begins to push significantly in avenues otherwise overlooked,  like streetwear.

“The way men dress today is completely different from the way they dressed 15 years ago where suits were symbols of power. Now, you see much more casually dressed people. Today, you represent yourself, and not a brand or trend. There is a very big influence of streetwear in all the luxury brands. In the future, it is important to be very open-minded to collaborating, to opening doors to different creative people.”

Read: The inexorable rise of Kering

Those collaborations, as he explains, could be achieved while sticking to the parameters of what Corneliani has always represented – elegance. “Collaborating with a credible name in a particular field allows us to remain democratic in our tastes and keep our DNA of elegance, but at the same time introduce, for example, a new collection of sneakers, sweatshirts, pants and jackets made in collaboration with a graffiti artist or an embroidery specialist.”

But while Stefano is pushing the brand into uncharted territory, does he have any fears?

“I don’t know whether it’s a fear or a sense of responsibility, but the idea that you are responsible for the livelihoods of 1,500 people. If I make a mistake with a bad collection or formulate a bad strategy, I could potentially impact more than a thousand people and their families. I think it’s a good fear because it keeps me sharp.”

And if there’s one thing that Stefano does as effortlessly as the brand he represents, it is staying sharp.