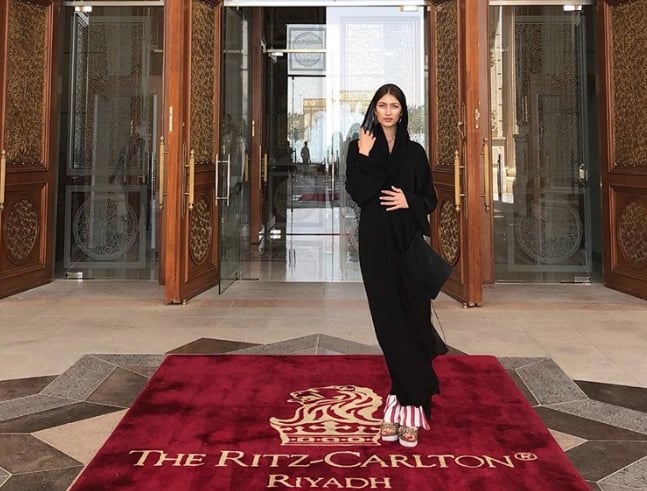 Models and makeup artists preparing for the inaugural Saudi episode of Arab Fashion Week said they were surprised the event was taking place in the deeply conservative Muslim kingdom.

“We are so excited because this is the first fashion week in Saudi Arabia, so we are making history,” model Anita Dmycroska said.

Yet, restrictions persist. Tuesday’s reception was open to men and cameras, but only women are permitted at catwalk events and outside photography is barred.

With recent reforms, women in some cities have begun to don more colourful abayas, sometimes trimmed with lace and velvet or left open to reveal long skirts or jeans.

No abayas will feature on the catwalk. The event hosts invitation-only fashion viewings and a Harvey Nichols pop-up store in a tent that was still being erected hours before the first show.

The event, initially scheduled for last month, was postponed because of delays in issuing visas. Industry figures from Italy, Russia and Lebanon flocked to Riyadh, many for the first time, to admire the work of local and international designers.

She hopes the event will bring revenue into the kingdom and highlight local talent.

“People go to Paris on the Paris Fashion week, the hotels are completely fully booked,” she said. “I want to create the same demand in Saudi Arabia, twice a year. I want to create a platform for the local designers to go worldwide.”

“I’m very proud to participate in this first edition of Arab Fashion Week in Saudi Arabia, because it’s a part of the revolution of the women in this country,” he said.

By bringing talent from Europe and placing international brands on the same catwalk as Arab brands, he hopes to elevate local fashion designers.

AFC wants to introduce fashion courses, internships and scholarships to Saudi Arabia and develop a fashion district in Riyadh.

Jacob Abrian, AFC founder and chief executive, said many Arabs have had to leave their countries to have fashion careers, but this recurring event allows them to stay in the region.