Hallowed Be Thy Plane - Gulf Business 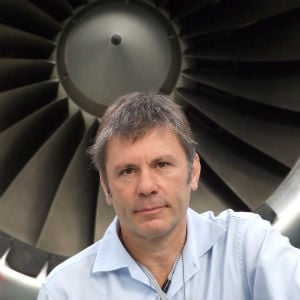 Being a singer, songwriter, airline pilot, champion fencer, author, actor, marketing director and the brains behind a new aviation centre in the UK would be enough to keep most people busy. But Bruce Dickinson really isn’t like most people. He also happens to be the front man of the world’s biggest and most successful heavy metal band, Iron Maiden. Fortunately for the economic world business comes naturally to the man formerly known as ‘Bruce Bruce’, and his Iron Maiden fame is certainly not a hindrance in the boardroom. As he explained to Gulf Business, formal business meetings often descend into 80s rock music trivia.

“It happens all the times!” says Bruce. “You have to bear in mind, Iron Maiden fans of a certain generation are now in leading senior positions in many key industries. I’ll be meeting directors, who all look very respectable, to discuss a business matter and we start talking about the music and the albums and tours – it’s quite amusing!”

Despite recently turning fifty years old and still touring and producing albums with rock gods Iron Maiden – their last album, their 15th studio work, reached number one in 28 different countries – Dickinson has recently launched an aviation centre in south Wales; a cross between a spa and MOT centre for aeroplanes.

Formerly a pilot with Astraeus Airlines, Dickinson realised there was a gap in the market for airlines who didn’t have services to repair and renovate their planes – though he admits the Gulf needs no such help with their aircraft.

“At Astraeus we were a small independent airline and our maintenance always had to be done by independent companies. We realised how expensive and time consuming it was, and not always very efficient. We had a market where many operators were flying their aircrafts as far as Abu Dhabi or Hong Kong to get them maintained. So we launched the Cardiff business at this fantastic site in south Wales that has everything ready and capable to receive and maintain various aircrafts.

“We’re targeting Asian airlines initially as in truth, that’s where the growth is. Economically Europe has flat-lined, India has stalled while they sort out their corruption issues but Asia is still growing. The Middle East doesn’t need help from us to maintain their aircrafts – they’ve got everything to hand!”

Removing his captain’s hat for a moment, Dickinson, already enthusiastic talking about running Europe’s leading MOT centre for planes, comes alive when we begin to discuss the group that has been a pivotal force in his life for over 30 years. Having sold over 85 million records worldwide and performed two thousand live shows, Iron Maiden really are the rock gods of heavy metal and there is no sign of them hanging up their guitars anytime soon.

“We are touring the USA and Canada this year and we start rehearsals at the beginning of June in Florida, so I will be handing the aviation reigns over to my business partner. This year we don’t have any concerts planned for the UAE, but a couple of tours ago we played Dubai and what was brilliant is that it wasn’t just an audience of expats. It was great to see an audience of locals from all over the Arab world in one place at a festival and even better that it was a mixed audience too.”

And does he still get the same buzz three decades on from joining the group? “More so than ever! We used to tour ten months a year repeatedly over and over again and sometimes it felt like you were on a treadmill and the rest of life was passing you by. I know what the rest of life is like now and sometimes I’m glad it’s passing me by, because I’m on tour with Iron Maiden and it’s brilliant!”