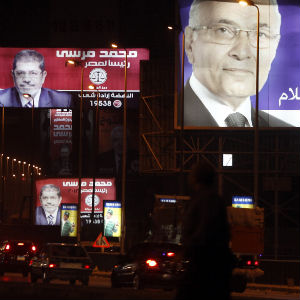 The results of the first round of presidential elections in Egypt have led to massive protests across the country, with the majority of the voters seemingly unhappy with the top two candidates.

According to official results, Muslim Brotherhood’s Mohamed Mursi topped the poll with 24.3 per cent of the votes, followed by Ahmed Shafiq, Hosni Mubarak’s last prime minister with 23.3 percent. Voter turnout was 46 per cent.

Since neither of the candidates won more than 50 per cent of the votes needed to win the presidency in the first round, Egypt will hold the run-off elections between the top two candidates in mid-June. The military council has promised to hand over power to the new president by July 1.

While people in Egypt seem dissatisfied with the first round result, how happy will the GCC be with the election of either Mursi or Shafiq as the new president?

“If the political developments over the last year are any indication, the future of GCC-Egypt ties is likely to be tentative,” said Dr N Janardhan, a UAE-based political analyst.

“While the economic dynamics are likely to remain unchanged, except in the realm of aid, investments and projects initiated by GCC governments, political ties would witness considerable strain. The degree of this tension depends, of course, on who wins the presidential run-off election in mid-June,” he said.

According to Dr Janardhan, the GCC governments would be happy to deal with a ‘known devil rather than an unknown angel’.

“Though neither of the candidates has clearly spelt out his foreign policy agenda during the campaign trail, the reluctance of the GCC governments, especially Saudi Arabia, to support Hosni Mubarak’s ouster during Egypt’s Arab Spring revolt last year would make militaryman and ex-PM Shafiq their preferred choice,” he said.

“The GCC government’s main problem, particularly that of Saudi Arabia, would be Mursi’s impact on the political aspirations of various religious factions in the region and the problems they may bring about internally.

“Further, the Muslim Brotherhood’s stance on security issues, especially those revolving around Israel and Iran, are still unclear, thus becoming another area of potential tension,” he added.

Earlier this month, tensions escalated between Saudi Arabia and Egypt after the arrest of an Egyptian lawyer in the Kingdom caused street protests in Cairo.

The Saudi ambassador was recalled to the Kingdom immediately, though he returned to Cairo after almost a week.

“Our decision to recall the ambassador and shut down the embassy was to protect its staff from any ominous consequences,” Saudi’s King Abdullah bin Abdul Aziz told the visiting delegation in a speech.

“What happened recently and its ramifications on the relations between the two brotherly countries hurts every Egyptian and Saudi citizen,” he said, adding, “We shall not allow this passing crisis to last long.”

For Egypt, regardless of who comes to power, it will be essential to maintain good relations with the GCC.

The Gulf countries have pledged huge sums of money in aid since the revolution began in Egypt.

Last week, Saudi Arabia said that it was in the process of finalising its $2.7 billion aid package for Egypt. The package includes the transfer of $1 billion to Egypt’s central bank, $500 million for the support of development projects, $250 million to finance purchases of petroleum products and $200 million for SMEs.

The UAE promised a $3 billion aid package last year, which includes a $1.5 billion fund for SMEs, a $750 million grant to develop housing and infrastructure projects, and a $750 million loan for other projects.

Qatar has also pledged to invest $10 billion in Egypt through investments and projects. However, the Gulf state’s Foreign Minister Khaled bin Mohamed al-Attiya said that the projects will only be implemented once a civilian government takes over the country.

“We will continue our unlimited support to Egypt in all aspects during the coming period,” Attiya said.