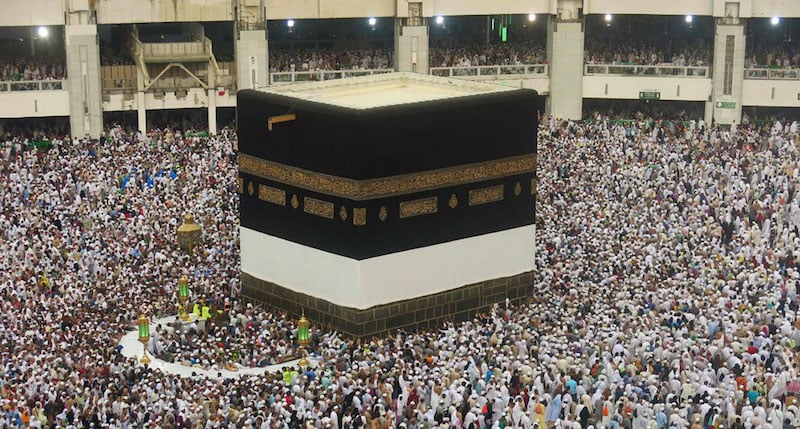 A few steps away from Makkah’s Grand Mosque, a dozen empty towers rise into the sky above the holy city visited by millions of Muslim pilgrims every year.

Hilton and Marriott logos adorn the site, heralding the $3.2bn Jabal Omar complex that is being built to bring hotels, restaurants and luxury malls to the pilgrimage experience.

“All these hotels and buildings around the mosque will bring more business, God willing,” said Awad al-Arshani, beckoning customers into his Dates of the Two Holy Mosques shop.

Pilgrimage is the backbone of a plan to expand tourism under Crown Prince Mohammed bin Salman’s economic reform programme, announced a year ago to diversify the economy away from oil.

The hajj, a journey every able-bodied Muslim who can afford it must perform once in a lifetime, is a profound experience for those who undertake it.

It is also big business for Saudi Arabia. The hajj and the year-round lesser pilgrimage, umrah, generate $12bn in revenues from worshippers’ lodging, transport, gifts, food and fees, according to BMI Research.

But there are still big questions about how Saudi Arabia will cater to its most active tourism market, especially as the kingdom eschews tourist visas.

Pilgrimage visas currently bar travel outside the holy cities of Makkah and Madinah. Authorities plan to relax the restrictions, but have not specified to what extent and have raised the visa cost for return pilgrims to more than $500.

Most of the kingdom’s tourism development so far targets the affluent end of the market, while the biggest and fastest-growing pilgrim populations come from modest means.

Additionally, worshipping at shrines is considered idolatry under Saudi Arabia’s austere official Wahhabi school of Islam and it is unclear which Islamic historical sites pilgrims might be lured to after years of neglect.

But there is scant sign of any restoration in Makkah so far, said Irfan Alawi, founder of the Islamic Heritage Research Foundation.

Religious police still sit outside some of the sites, shooing away pilgrims with warnings about idolatry, he said. Dozens of other sites were demolished to make way for the redevelopment.

Officials aim to increase the number of umrah and haj pilgrims to 15 million and five million respectively by 2020, and hope to double the umrah number again to 30 million by 2030.

In addition, they hope pilgrims will be attracted to spend money at museums, luxury resorts and historical sites.

Some pilgrims are encouraged by the moves.

“We love this country because it’s the cradle of Islam, the land of the revelation and the Prophet, peace be upon him,” Nasser al-Zein, a Turkish-German car dealer from Frankfurt, told Reuters as he performed hajj. “We’d love to spend our money here, more than in the West. Here, it’s an Islamic country.”

Others find the costs prohibitive.

“The problem is the visa. If they were to extend it perhaps we could stay and visit places other than Makkah and Madinah,” said Zawaoui Daraji, 50, a trader from Algeria.

Such concerns have not deterred Saudi officials. Long before last year’s reform announcement, they began investing tens of billions of dollars in mega-hotels, public transit and a Grand Mosque expansion in Makkah.

The $15bn Abraj al-Beit golden clocktower complex, completed in 2011 with seven towers of hotels and malls, already looms over the mosque.

Joining it soon will be 40 new towers from the Jabal Omar development, begun in 2008, and the $3.5bn Abraj Kudai complex, which will be the world’s largest hotel and come complete with four rooftop helipads.

A new airport in Jeddah and the high-speed Haramain rail system, both set to open next year, will whisk visitors between cities along the Red Sea Coast.

Despite a funding crunch for existing projects in the last year, authorities have announced new leisure mega-projects outside the holy cities.

One of these, the Faisaliah project will run from Makkah’s edge out to the Red Sea. It aims to attract 10 million visitors to seaside getaways and Islamic research centres by 2050.

The King Abdullah Economic City, one of the stops on the rail line, is planning resorts and theme parks, too.