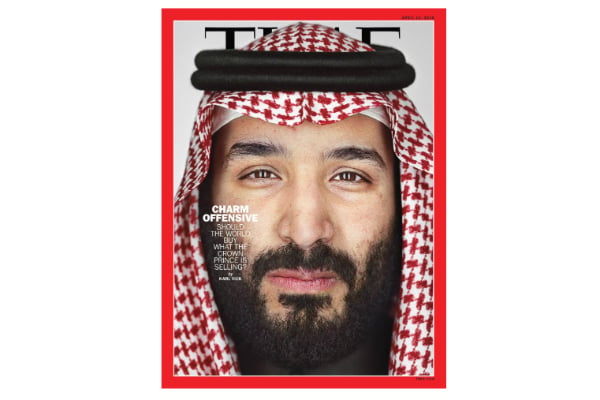 Saudi Arabia’s Crown Prince Mohammed bin Salman has said observers should focus on the “end, not the means” as he leads reform efforts that have seen top businessmen detained and new rights given to women.

The heir to the throne’s comments were made in an interview with US publication Time magazine for the cover of the April 16 issue as he reaches the final leg of a US tour that has spanned multiple cities and included meetings with President Trump and top executives.

Major agreements have been announced during the three-week visit and the crown prince has been hosted by the world’s richest men, while overseeing deals for cinemas, technology, military equipment and more.

During the interview, he repeated many of his previous comments regarding the hijacking of Islam after 1979 and the rise of fundamentalism in the kingdom and other countries.

“We believe the practice today in a few countries, among them Saudi Arabia, is not the practice of Islam,” he told Time.

“It’s the practice of people who have hijacked Islam after 1979.”

Bin Salman was also asked questions regarding his rise to power after replacing Prince Mohammed bin Nayef as Crown Prince last June and launching a November corruption crackdown that saw hundreds of businessmen, royals and officials hand over billions of dollars in exchange for their release from detention.

The crown prince reportedly told the publication he had no plans to dilute the Saudi monarchy’s power and encouraged a focus on the results of his reforms, which have included the opening of the kingdom’s first cinemas in decades this month and a decision to allow women to drive, rather than the means of getting there.

Read: Saudi women to be allowed to drive trucks, motorbikes

“What we should focus on is the end, not the means,” he was quoted saying. “If the means are taking us to that end, that good end, and everyone agrees on it, it will be good.”

Bin Salman said these ends included freedom of speech, improved employment, economic growth, security and stability, according to the publication.

Another topic of discussion was the war in Yemen, where the kingdom has led a coalition of Arab states in support of forces loyal to the government of President Abd-Rabbu Mansour Hadi since 2015.

The crown prince did not rule out sending troops into the country in contrast to a campaign that has so far mostly focussed on air strikes, but said he didn’t want the conflict across the border to impact everyday life in the kingdom, according to the publication.

“We want to be assured that whatever happens, the Saudi people shouldn’t feel it,” he said. “The economy shouldn’t be harmed or even feel it. So we are trying to be sure that we are far away from whatever escalation happens.”

In other comments, he denied that Saudi Arabia spread extremist ideology, suggesting instead it was “the biggest victim” of the practice.

He said the government under his leadership was intent on undoing lessons taught by extremists and had Islamic teachings on its side.

The crown prince also did not rule out closer cooperation with Israel, following recent comments in an interview with The Atlantic appearing to support the country’s right to its own nation-state.

Read: Saudi crown prince says Israelis have right to their own land

Ties between the Saudi Arabia and Israel have reportedly grown closer behind the scenes, despite the former still not officially acknowledging Israel’s existence, in response to the aggression of regional rival Iran.

“We have a common enemy, and it seems that we have a lot of potential areas to have economic cooperation,” Mohammed bin Salman said.

“We cannot have relations with Israel before solving the peace issue with the Palestinians because both of them they have the right to live and coexist,” he explained.

But “when it happens, of course next day we’ll have good and normal relation with Israel and it will be in the best for everyone”.

The crown prince’s inclusion on the Time cover follows a poll on the magazine’s website in December that saw him ranked ‘person of the year’ by online readers.

The vote was separate from Time’s actual ‘person of the year’ selected by editorial staff.