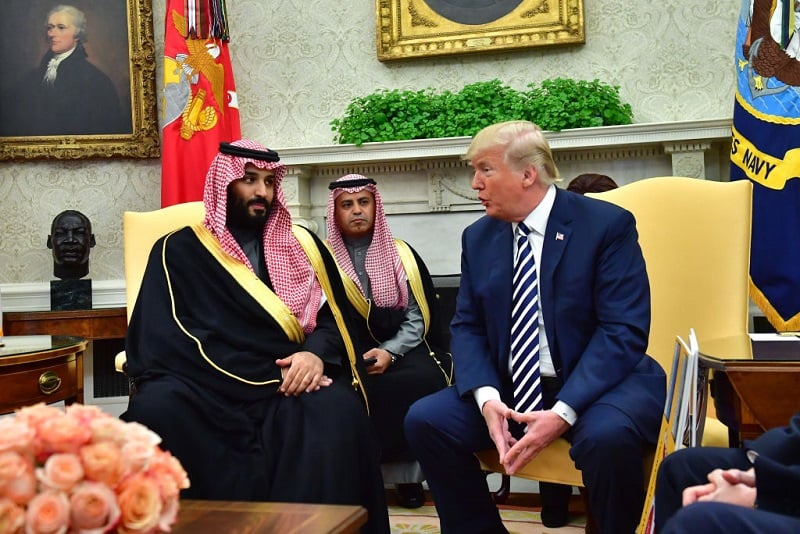 US President Donald Trump and Saudi Crown Prince Mohammed bin Salman discussed the situation in war-torn Yemen during a meeting on Tuesday, including Houthi rebel and Iranian activity and the humanitarian crisis, the White House said.

“On Yemen, the President and the Crown Prince discussed the threat the Houthis pose to the region, assisted by the Iranian Islamic Revolutionary Guards Corps,” it said in a statement on Wednesday.

“The leaders discussed additional steps to address the humanitarian situation and agreed that a political resolution to the conflict is ultimately necessary to meet the needs of the Yemeni people,” the statement said.

A Saudi-led coalition intervened in neighboring Yemen in 2015 against Iran-aligned Houthis, who had ousted the internationally recognized government of President Abd-Rabbu Mansour Hadi. The civil war has killed an estimated 10,000 people.

On Tuesday, the US Senate killed a resolution seeking to end Washington’s support for Saudi Arabia’s military campaign in Yemen.

Some of the lawmakers backing the resolution called the conflict a “humanitarian catastrophe,” which they blamed on the Saudis.

Last week, defence secretary Jim Mattis appealed to lawmakers not to adopt the measure and defended US military support to Saudi Arabia.

Mattis said the US assistance, which includes limited intelligence support and refueling of coalition jets, was ultimately aimed at bringing Yemen’s war toward a negotiated resolution.

He warned that a withdrawal could increase civilian casualties and would embolden the Houthi rebels, who have fired missiles at Saudi Arabia and targeted ships off Yemen’s coast.

On Wednesday evening, a small group of protesters opposed to the Saudi military campaign in Yemen demonstrated at an event in Washington for the Misk Art Institute, an organization established by Prince Mohammed’s foundation.

“Stop killing innocent children,” one of the protesters shouted as she was removed by security guards at the event at the Kennedy Center. It was not clear whether Prince Mohammed attended the event.

“Discussion focused on the shared interests of both nations for developing technology and growing trade and business ties,” the statement said.

At the White House meeting on Tuesday, Trump credited US military sales to Saudi Arabia with boosting American jobs.