Saudi Crown Prince Mohammed Bin Salman has been voted Time magazine’s person of the year for 2017 in an online reader poll.

The magazine wrote on Monday that the Saudi royal, who replaced former Crown Prince Mohammed bin Nayef as heir to the throne in June, received 24 per cent of the ‘yes’ votes cast.

He was followed by people who shared their experiences with sexual assault and harassment under the #metoo movement with 6 per cent of votes.

Former San Francisco 49ers quarterback Colin Kaepernick, special counsel Robert Mueller and the Dreamers, undocumented immigrants who were brought to the US as children, received 5 per cent of the votes each.

Other prominent figures on the list included former US presidential candidate Hillary Clinton, former director of the FBI James Comey and Canadian Prime Minister Justin Trudeau with 4 per cent each. 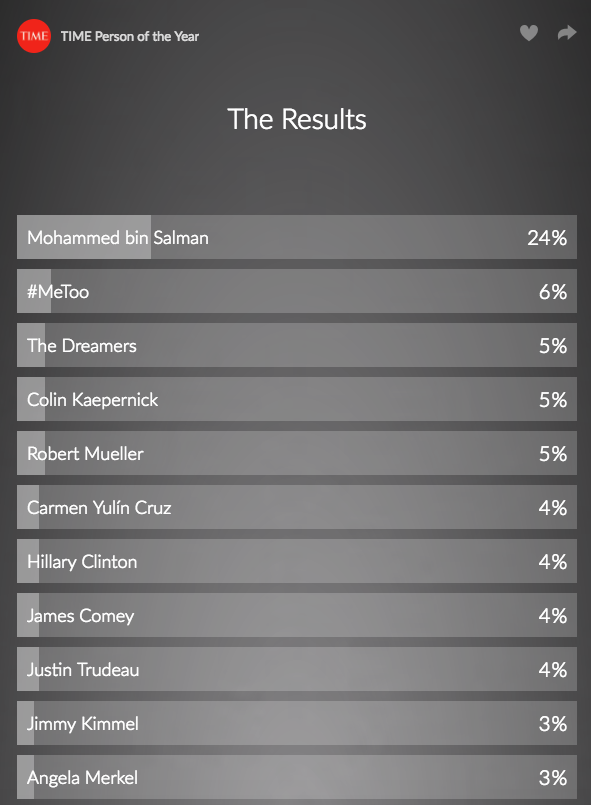 The Saudi Crown Prince has made headlines recently after spearheading a corruption crackdown that has snared high profile businessman, royals and ministers.

Read: Saudi expects to recover up to $100bn from corruption settlements

Prior to this, he was known as the face of the kingdom’s reform plan – Vision 2030 – after promising to end its “addiction” to oil.

Some have speculated that current monarch King Salman could be preparing to abdicate to allow the ambitious Crown Prince to take his place.

Read: Saudi king has no plans to abdicate for crown prince – report

The editors of Time magazine select their ultimate person of the year as the individual they believe wielded the most influence in the previous 12 months.

US President Donald Trump was declared Time person of the year for 2016 ahead of his inauguration and attracted controversy last month when he claimed to have taken a “pass” on an interview and “major photo shoot” with the publication after he said he was told he would likely be person of the year again.

Time later said the president was incorrect and it would not comment on its choice until December 6.