by Michael Kortbawi and Robert Mitchley 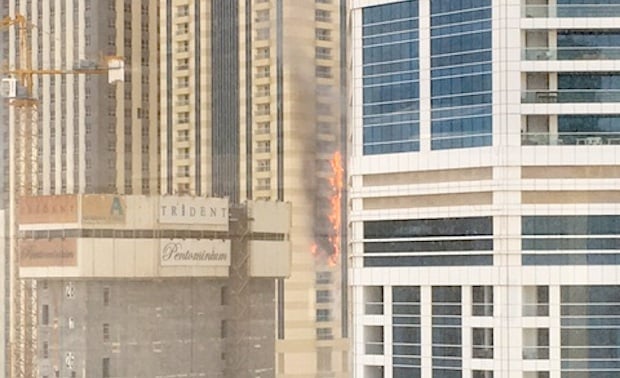 On Wednesday, July 20, the Sulafa Tower in the Dubai Marina, a 78-storey high-rise residential building, suffered extensive fire damage as a result of the spread of a fire on the exterior of the building.

This building is recorded as having 702 apartments with the construction having been completed in 2010.

It is well documented that many of the buildings constructed prior to 2011 in the United Arab Emirates are clad externally with aluminium composite panels which contain a core of insulating material that is combustible. Previous fire incidents, attributed to the use of this type of external cladding, led to the revision and update, in 2011, of the provisions of the UAE Fire and Life Safety Code of Practice.

The construction of new buildings which were approved after September 1, 2012 and those new buildings on which the external cladding had not been installed by April 1, 2013, were and are now, subject to these new provisions and minimum standards which have been established.

Annexure A.1.21. Rev 2 of the UAE Fire and Life Safety Code, in which the new provisions and standards are set out, runs to 33 pages and details the type of materials which can be used in the cladding panels as well as the testing, approval and certification requirements in respect of such materials.

The new provisions also provided for the certification by the civil defence department of the installers of fire safety systems and extended the role of professional fire safety consultants in the design, approval and construction phases of any new buildings.

It therefore appears evident that all of the newly constructed high rise buildings (post 2012) will be far less susceptible to the risks of extensive fire damage as has been the case with the buildings approved and constructed before the 2011 revision.

However, it is the risks posed by the older buildings which remain to be addressed. Previously published media reports have indicated that there are approximately 1,000 buildings in Dubai which have external cladding and which need to comply with the new standards set out in the UAE’s Fire and Life Safety Code of Practice.

At present the only reference to the existing (pre-2012 constructed) buildings in Annexure A.1.21. Rev 2 is provision 1.5, which provides the following:

“For the buildings that are existing and have cladding/curtainwall systems on the building envelope, it is highly recommended to the building owner to have the perimeter wall evaluated through the civil defence department and resolve non-compliance through alternative solutions.”

The civil defence department has, as recently as April 2016, stated that the provisions of the UAE Fire and Life Safety Code of Practice are being further revised to include measures to address the fire safety risks in respect of these buildings.

These provisions will likely be prescriptive and therefore require positive action on the part of the owners of these buildings. It is also expected that severe penalties will follow any non compliance with the revised provisions.

We understand that the finalisation of the revised and updated 2016 provisions and minimum standards is being dealt with by the civil defence department and various committees within the Dubai municipality as a priority and the publication of the revision is expected very soon.

Due to the individual characteristics of each building it is not possible to implement a “one size fits all” solution in order to address the fire safety risk which the individual buildings may face. It therefore appears that the evaluation of the affected buildings is a vital starting point for the process.

The role of professional fire safety consultants is also set to play an important part in the assessment and implementation of the appropriate corrective measures, applicable of the individual buildings, which are found to be non-compliant.

With the legal framework set to be in place very shortly, through the revised UAE Fire and Life Safety Code of Practice, and the required compliance by the building owners to ensure an effective implementation thereof, the occurrences of fire damage to high rise buildings, similar to that which we have witnessed in recent years, should soon be something of the past.

Also read: Dubai Marina Torch Fire: What Next? Who Pays?

Dubai Address fire: What comes next?

Dubai Has Highest Fire Safety Standards In The World – Official