by Barry Greenberg and Michael Kortbawi 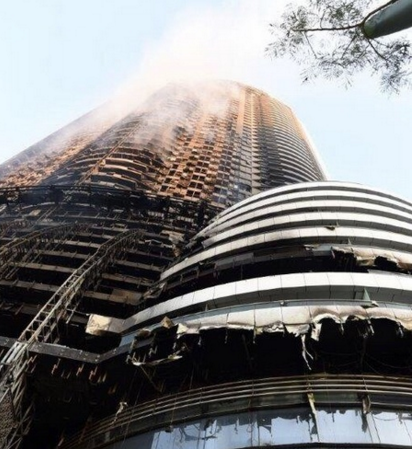 The New Year arrived in Dubai, United Arab Emirates, with more than the usual amount of spectacular fireworks this year, as the hundreds of thousands of people who gathered around the Burj Khalifa this past Thursday evening can attest to.

As the crowds gathered, the nearby Address Downtown Hotel erupted into flames two or three hours prior to midnight. Within minutes, the flames raced towards the top of the 63-storey behemoth luxury hotel. Despite this visually horrifying scene, Civil Defence teams were able to control the blaze, to the point where the fireworks show was able to safely proceed at midnight and the number of injuries was limited to 16 people.

As of this writing, the cause of the fire is not known. Nor has there been any readily available explanation as to why a modern skyscraper combusted in such a quick and spectacular manner. While answers to these important questions will hopefully be provided once the investigations are complete, we can note that this is not the first time that such a loss has befallen a landmark tower in Dubai.

The Tamweel and the Torch

As was noted in a prior article on this subject, Dubai Marina Torch Fire – What Next? published in March 2015, Tamweel Tower located in Dubai’s JLT area burned in 2012. The fire spread through the aluminum cladding affixed to the tower’s sides, consuming a large portion of the structure’s roof. Likewise, the February 2015 conflagration at the unfortunately named Torch Tower may have been at least partly a result of that building having been cladded with similarly non-fire resistant composite aluminum panels. These cladding panels contain a mix of aluminum and polyurethane, which when exposed to flame or even extreme heat, will often ignite.

One area where this incident shows that Dubai residents can take comfort is in the professionalism of the Civil Defence and firefighting services. Once again, as was the case with the Torch fire, the conflagration was extinguished efficiently and with minimal casualties, considering the scope of the blaze and the congested streets during the lead up to the fireworks.

In many cities, a fire such as this would cause the entire area to shut down for a lengthy period; by contrast Dubai successfully proceeded with its world class fireworks show while the firefighting was still underway. This is an aspect of these circumstances that should not be overlooked – trust in Dubai’s firefighting abilities is quite deserved.

What is different this time?

Any speculation as to why the Address was consumed by fire so quickly is at this juncture, just speculation. Although the speed of the fire does raise questions. The UAE updated its Fire and Life Safety Code in 2013 to require exterior cladding on all new buildings over 15 metres tall to be fire resistant. Dubai was in the process of amending its building codes, even prior to the Tamweel fire, to prohibit the use of flammable cladding. These requirements, however, do not apply to already existing buildings, and the Address was completed in 2008.

At the time of the Torch fire, as stated in the above cited article, it was posited that building owners should consider the costs and benefits of retrofitting any structure that is clad in the potentially flammable material. It was also suggested that building owners faced with the high costs of replacement consider their options as to possible risk sharing, either via their own insurance cover or by making claim against the building’s developers, their construction firms and design professionals. Since then, however, there have not been any reported instances of building owners seeking to replace what might be similar cladding.

What may differentiate this occurrence from prior fires is the identity of the owner of the Address. This property is owned by Emaar Hospitality Group, a subsidiary of Emaar Properties, one of the most prominent companies in the UAE and the developer of many of Dubai’s landmark structures and communities.

The Address Downtown is one of several high end Address branded hotels owned by Emaar, including the Address Dubai Mall and Address Marina Mall, which together with the other properties, represent a huge investment in a very valuable brand.

Emaar is publicly traded on the Dubai Financial Market and is the heaviest weighed stock in that exchange. Emaar issued a statement shortly after the blaze, stating that it expects “no material impact on the company as a result of this incident”, as the Address Downtown was insured.

Furthermore, Emaar has stated that it has already commenced repairs to the Address Downtown and that its contractors are working “around the clock” in this effort, which will entail rebuilding to “the highest standards of quality and as per international best practices.”

Nevertheless, Emaar’s stock fell in trading the first day the exchange was open after the fire.

It remains to be seen whether the fact that one of Dubai’s most prominent developers has now been affected by a major fire will lead to a greater reassessment of potential risks to other structures. However, with this issue once again driven into the forefront, both the prudent business realities and public safety considerations create fertile ground for such a reassessment.

The process of the adjustment of any loss involves retaining qualified loss adjusters to appraise the extent of the damage. In major losses, both owner and insurer will retain their own experts, who invariably will come to differing opinions on what the insurable loss is. This will lead to negotiations and litigation, should agreement not be reached. Often, such as is the case with Tamweel, this will lead to delays in the repair process.

Here, Emaar likely has the resources that should enable it to swiftly complete repairs, notwithstanding that they might not receive the covered amount from its insurers until after all repairs are completed.

Those who own tall structures constructed prior to the changes in the building regulations should consider obtaining an engineering and fire safety assessment to determine whether their structures are at an elevated risk factor and what the remediation costs would be.

Should they determine that remediation is warranted, they can consider risk transfer options, as previously discussed, noting that it may be a difficult challenge to compel either the developers, contractors, or the involved insurers to honor their claims.

Another important reminder is for both owners and tenants to now review their insurance cover. The UAE is notably under-penetrated when it comes to the level of insurance cover, and many premises are under-insured, if not completely uninsured. Owners and occupants should make sure that they have enough cover to compensate for their actual losses, should peril befall their premises.