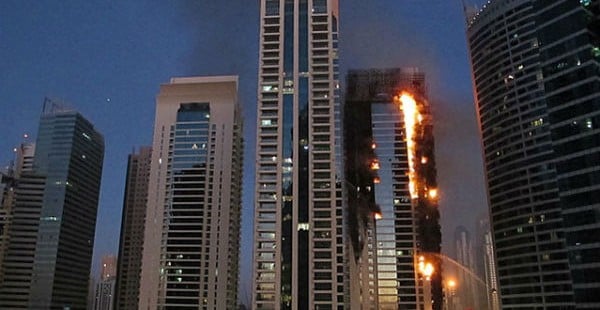 The UAE, specifically Dubai, has some of the highest fire safety standards in the world with stringent regulations, according to a senior official.

Major Jamal Ahmed Ibrahim, director of Preventive Safety Department at Dubai Civil Defence, said that the UAE adopted a new law in September 2012, which governs safety standards across the country.

“The Dubai civil defense now has 31,000 buildings connected with our operations, and we monitor them 24/7. Our strategy is to cover all the buildings in the emirate and across the UAE,” he told reporters.

The regulator now imposes up to 187 fines ranging from Dhs500 to Dhs50,000 on owners and building managers who don’t comply with the necessary standards. “We conduct random checks to ensure compliance,” said Major Jamal.

His statements came as international fire equipment manufacturer Honeywell released a survey which found that 48 per cent of GCC residents have never taken part in a fire drill and that 28 per cent ignore the fire alarm.

Among the UAE respondents, 26 per cent said that they didn’t know where the fire exit in their building was and up to 53 per cent never had fire safety equipment tested. While 43 per cent have never participated in a fire drill, 35 per cent ignore the fire alarm.

The problem of fire safety in the region rose to the fore following a fatal fire in a mall in Doha that killed 19 people, including 13 children and a dramatic blaze that gutted a building in Dubai’s Jumeirah Lake Towers last year.

“The results of the survey reveal an alarming lack of awareness among the GCC’s residents,” said Mark Fenton, business leader for Honeywell Life Safety, MEA.

According to Fenton, the general attitude towards safety is – ‘it has never happened to me, so I don’t have to bother.’

Regulators, facilities managers, owners and residents must work together to ensure that there is compliance to standards and that they are trained to prevent as well as deal with emergencies, he said.

As per new regulations enforced by the Dubai civil defence, 10 per cent of supermarket staff and 50 per cent of hotel staff have to be trained in fire safety. The regulator is also in the process of developing a training centre to provide a certified course, stated Major Jamal.

Any residents who fear a potential hazard in their buildings can always contact the civil defence either on their website, on Twitter on via their iPhone app, he added.

Authorities are required to respond to their claims within three days, and will take action against the building management if they find violations, he assured.