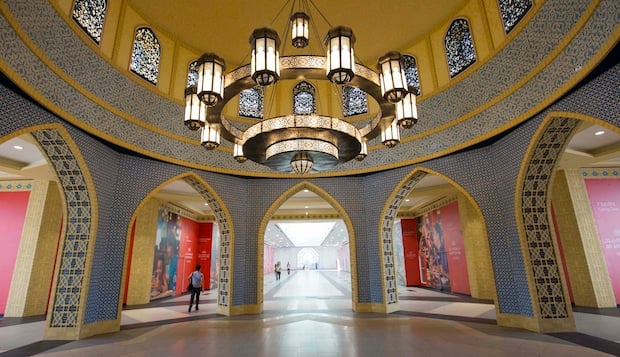 A new pedestrian link has opened between the Ibn Battuta Mall and the Dubai Metro station, mall developer Nakheel announced on Tuesday.

The two-storey, 210 metre walkway will enable passengers using the metro or bus services to directly access the mall.

The walkway features 90 new retail and dining outlets due to open later this year, a statement said. It will include a 24 hour food court, which will also introduce American food chain Habit Burger to the UAE, officials confirmed earlier.

“The metro link is a natural progression for Ibn Battuta that will inspire more visitors to discover its retail offering and encourage those who would normally drive to use public transport instead.”

Themed around the journeys of renowned 14th century Arabian explorer, Ibn Battuta, the mall has 400 shops, restaurants and entertainment outlets.

The mall-metro connection is part of an ongoing expansion at the mall, that will increase its size to 7 million sq ft.

Phase one – a 300,000 sq ft extension with 60 new shops and restaurants opened in May this year, with brands such as Decathlon, United Furniture, Marks & Spencer, Under Armour, Iconic, Superdry, Jashanmal and Paul opening at the mall.

Ibn Battuta’s first hotel – a 372-room Premier Inn connected directly to the mall – is scheduled to open by October this year.

The next phase will see the development of a multi-storey parking facility as well as a new cinema complex. This is anticipated to be completed by third quarter of 2017.

In its final phase, the mall will add a 300,000 sq ft courtyard with a retractable glass roof that can be opened in the winter months. The size of four football fields, the courtyard area will be able to accommodate around 80 new shops and restaurants.

Another 372-room hotel – operated by AVANI – will also be opened as part of this extension.

Overall, the entire expansion – following which the mall will feature more than 1,000 shops and attractions in total – is slated for completion before 2020, Lootah told reporters earlier this year.