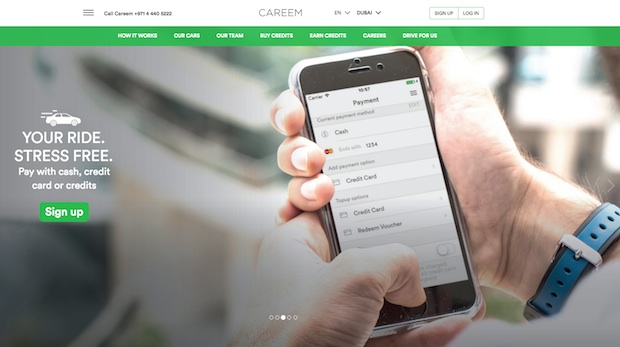 Taxi sharing app Careem has resumed services in Abu Dhabi, it confirmed on Wednesday morning. The company, along with rival Uber halted services on Saturday after some of their drivers were detained in the UAE capital.

“Careem is back in Abu Dhabi since 8.00am this morning and is operating on a skeleton basis until we are able to regain most of our fleet,” said Christian Eid, vice president of marketing.

“We decided to re-open our service primarily to support our captains [drivers] who rely on us to get business.

“Supply may be an issue in the capital at the beginning so we ask our customers to be patient with us until we gradually increase our fleet to meet demand,” he said.

He added: “We are glad to be back in Abu Dhabi and are still working closely with the authorities to secure our mission to provide a reliable platform for Careem drivers as well as a transport solution for our customers.”

While Uber clarified that none of its driver partners were detained, it said services had been halted as a precautionary measure.

“On Saturday, August 27th, Uber made the decision to temporarily suspend services in Abu Dhabi after reports of drivers being detained,” it said in a statement.

“At this point we do not know the reason for these detentions.

“While no driver partners using the Uber platform were stopped, we did this as a precautionary measure to not put driver partners at potential risk. At this point we will not resume services in Abu Dhabi until we have further clarity on the matter and reassurances that partners will not be at risk,” it added.

Careem said that it has received “complete assurance” from the authorities on the legal standing of its operations in Abu Dhabi.

“We have been reassured that this is not a legality or safety matter for Careem,” said Eid.

“Currently, the regulations for our industry include requiring a minimum price as well as operating solely with limousine licenced vehicles and drivers.”

Local transport authorities have been looking to regulate the taxi service market in the UAE.

In July, Dubai’s Roads and Transport Authority said it will launch a common booking and payment app to integrate private methods of transport with its own services.

The Integrated Mobility Platform (IMP) will allow users to pay for e-hail services such as Uber and Careem, the Monorail in Palm Jumeirah, Dubai Trolley in Downtown Dubai and private limousine services alongside the RTA’s own services.

Read more: RTA to launch own payment app with Uber and Careem