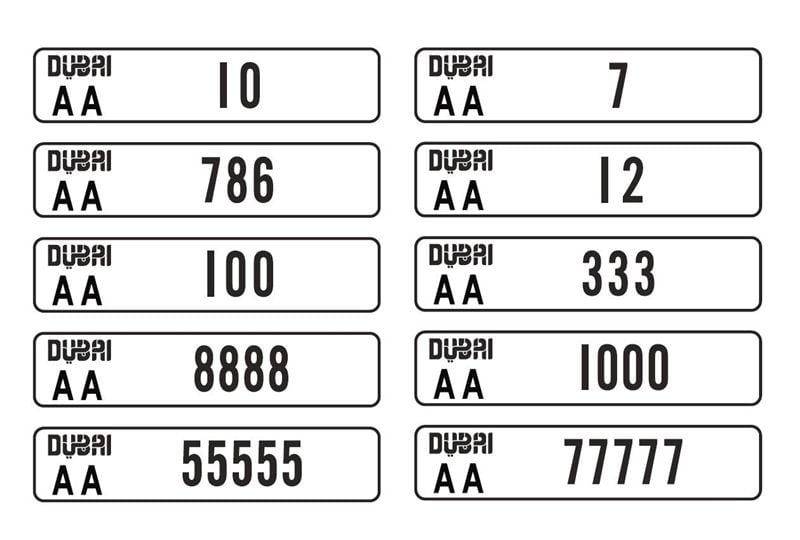 Dubai’s Roads and Transport Authority (RTA) has unveiled a new design for vehicle licence plates in the emirate.

The first lot of the new dual code plates will be released in an open auction to be held on Saturday December 9, at Westin Hotel, the RTA said in a statement.

The dual code plates will be released only through open auctions, the statement said.

Those interested in the (regular) plate bearing the Dubai brand in black colour can have their vehicle plates replaced at cost of Dhs35 for short plates and Dhs50 for long plates. Those opting for the coloured Dubai brand plate will need to pay a fee of Dhs400, it added.

“The new design of vehicle number plates is clear and easy to read from a distance,” said Mattar Al Tayer, director-general and chairman of the RTA.

“It is composed of three elements: The word Dubai (brand), number and code. The RTA would start replacing the existing plates of light vehicles by the newly designed plates as of February 2018.

“The replacement will be gradual and in lots according to a time chart to be announced in future,” he added.

The RTA regularly holds auctions for special VIP number plates. In October, the authority said it raised Dhs24.8m in its 96th edition of the licence plate auction, which saw 80 distinct plates go under the hammer.

A previous auction in May saw Dhs2.9m raised from the auction of a single number plate.

In October last year, a Dubai-based Indian businessman also bought the D5 number plate for Dhs33m in what was described as the biggest auction in the RTA’s history.

“The new initiative underlines RTA’s keenness to satisfy the needs of customers aspiring to own distinctive number plates, especially as the stock of single-code distinctive plates is about to be exhausted,” said Al Tayer.