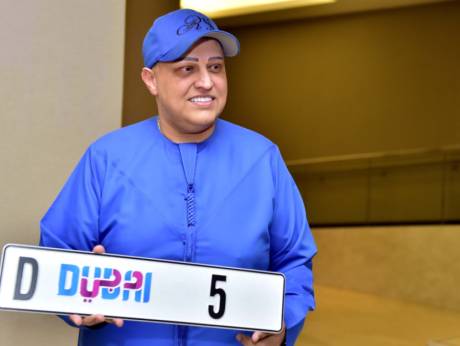 A Dubai-based Indian businessman has bought a coveted number plate for Dhs33m ($8.98m) in what has been described as the biggest auction in the Roads and Transport Authority’s history.

Balwinder Sahani, owner of property management firm RSG International, beat competition from other VIPs to secure the D5 plate on Saturday after paying Dhs25m for the number O9 last year.

“I like collecting unique number plates and I am proud to have got this number. I like number nine and D5 adds up to nine, so I went for it,” he told Gulf News.

“I have collected 10 number plates so far and I am looking forward to having more. It’s a passion. This number will go to one of my Rolls Royces.”

Bidding for the D5 plate began at Dhs20m and was fiercely contested.

(Story continues after the video)

More than 300 bidders participated in the live auction, which takes place every two months.

Ahmad Hashim Behroozian, CEO of the RTA’s Licensing Agency, said the auction, which offered 80 unique number plates, was the biggest it had seen so far.

“We usually have a lot of plate traders participating. Plate trading is big business and a lot of people are making good money out of it. We also organise special auctions for traders and issue permits for plate trading,” he said.

Other record UAE plate sales in the past include Number 1, sold in June for Dhs18m to Emirati businessman Arif Al Zarooni in Sharjah.

The country’s costliest plate is believed to be the Number 1 licence plate in Abu Dhabi, which was sold for Dhs52.2m to Emirati businessman Saeed Al Khouri in 2008.