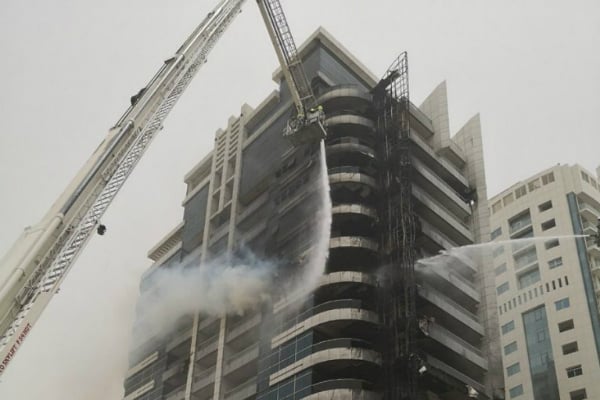 A fire at Dubai Marina’s Zen Tower earlier this month began in the kitchen of a business on the ground floor, according to reports.

The National quoted fire and rescue chief brigadier Rashid Khalifa Buflasa as saying an unspecified flammable substance caught alight and the blaze spread quickly to the rest of the building.

Images and videos of the fire were widely circulated on social media on May 13.

Dubai Civil Defence extinguished the blaze within 45 minutes and there were no reports of injuries but more than 100 residents have been forced to stay in temporary accommodation.

Pictures of the aftermath showed lower floors of the tower were particularly badly damaged on a day where firemen had to deal with blowing dust and strong winds.

Dubai Police’s head of fire investigation, Ahmed Mohammed Ahmed, said officers were exploring whether the blaze was caused by carelessness.

The building is still closed off to residents and many are staying in hotels or with friends.

Much of the building’s exterior appeared to suffer fire damage.

Dubai Marina and nearby Jumeirah Lakes Towers (JLT) have experienced a number of building fires in recent years.

Read: Fire breaks out at tower in Dubai’s JLT

That fire was also blamed on a recklessly thrown cigarette.