Fire breaks out at tower in Dubai's JLT - Gulf Business 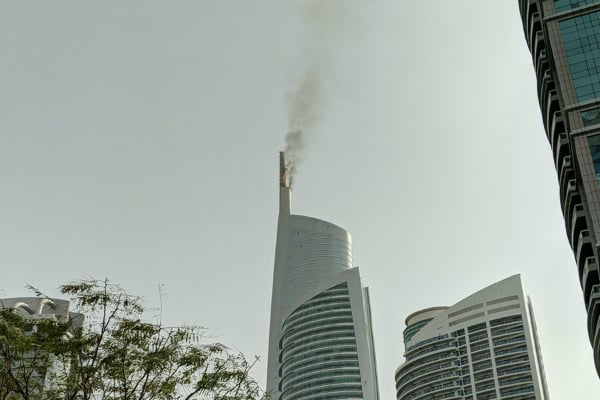 A fire has broken out at a tower in the Jumeirah Lakes Towers (JLT) area of Dubai.

Smoke was seen rising from the top of Almas Tower, which is the tallest building in JLT and serves as the headquarters of the free zone’s operator Dubai Multi Commodities Centre.

Twitter user @adnaanjp posted a picture of the blaze.

A video was also posted online by @JoseBerrocoso showing smoke and flames concentrated at the top of the building’s spire.

#AlmasTower in #JLT #Dubai on fire hope everybody is safe. pic.twitter.com/RAmTrafhI0

Dubai Media Office said the city’s civil defence was “working to put out a minor fire” at the tower.

Dubai Civil Defence is working to put out a minor fire that broke out in Almas Tower in Jumeirah Lakes Towers. All employees and visitors are being evacuated and no injuries have been reported so far.

The smoke had mostly faded by 4:00pm local time.

In a later statement at 4:50pm, Dubai Media Office said civil defence had brought the fire fully under control.

“The building was evacuated safely. No injuries have been reported,” it said.

JLT and the nearby Dubai Marina have experienced a number of building fires in recent years.

That blaze was also blamed on a recklessly thrown cigarette.