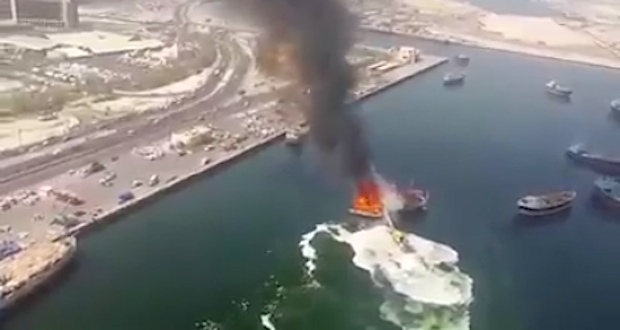 Dubai Police have released a dramatic video of a boat that caught fire in the Deira port.

Authorities said they managed to extinguish the fire on board the wooden dhow.

There were no details of any casualties.

The United Arab Emirates has seen an increase in the number of fire accidents on-board boats in recent years.

Earlier this year, a fire broke out at dawn in two boats and engulfed six other moored boats at the Abu Dhabi Marina Yacht Club.

In June last year, three boats in Dubai Creek caught fire, causing a major blaze in which one person was injured.

A major blaze also broke out on board a restaurant boat in Dubai Marina in 2014, causing passengers to evacuate immediately.