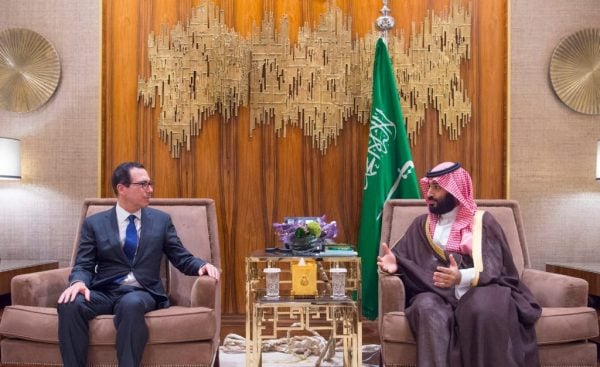 Mnuchin pulled out of a Saudi investment conference over the weekend, alongside officials from several other Western countries, after Saudi Arabia said Khashoggi died in a fistfight at its Istanbul consulate on October 2.

He told reporters on Sunday that the kingdom’s account of the incident was a “good first step but not enough”.

Read: US treasury secretary says premature to comment on sanctions against Saudi Arabia

“During the meeting, they stressed the importance of the Saudi-US strategic partnership and the future role of this partnership in accordance with the Kingdom’s Vision 2030,” according to the state news service.

“The bilateral relations between the Kingdom of Saudi Arabia and the United States of America were both reviewed on both the trade and investment sides and the opportunities for their development.”

The two also discussed “a number of issues, including joint efforts in the fight against corruption and the financing of terrorism”.

Mnuchin had earlier stressed it was premature to discuss any sanctions against Saudi Arabia after calls from some lawmakers in US President Donald Trump’s Republican party.

The Future Investment Initiative conference is still going ahead today despite the withdrawal of the treasury secretary and several high profile CEOs.