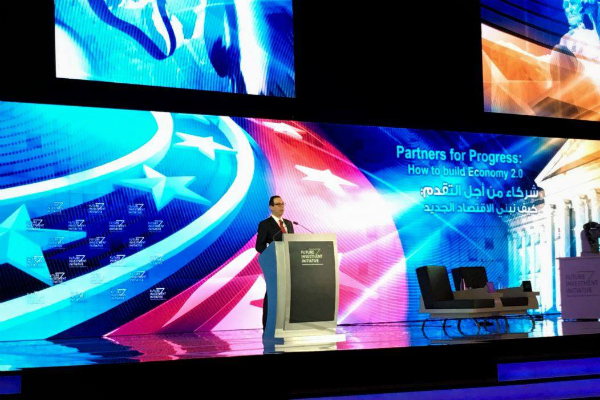 Saudi Arabia’s explanation of the killing of journalist Jamal Khashoggi was a “good first step but not enough”, the US treasury secretary said on Sunday, adding it was premature to discuss any sanctions against Riyadh over the incident.

The comments from Steven Mnuchin are the latest from the administration of US President Donald Trump that appear aimed at censuring a killing that has sparked global outrage while protecting relations with the world’s top oil exporter.

European governments, as well as some lawmakers in Trump’s own Republican party, have been more forceful in dismissing Riyadh’s explanation that Khashoggi died following a fistfight in the Saudi consulate in Istanbul on October 2 On Sunday, Britain’s Brexit minister said that account was not credible.

While Mnuchin said he would not attend a Saudi investment conference on Tuesday, he will still visit Riyadh as planned for talks with his counterpart there on joint efforts to counter terrorist financing and plans by Washington to reimpose sanctions against Iran in November.

Khashoggi, a Saudi national and US resident, went missing after entering the consulate to obtain documents for his upcoming marriage. After denying any involvement in the 59-year-old’s disappearance for two weeks, Saudi Arabia on Saturday said the prominent journalist and critic of Crown Prince Mohammed bin Salman had died during a fight in the building. An hour later, another Saudi official attributed the death to a chokehold.

Reflecting the intensifying international scepticism over its account, a senior Saudi government official has laid out a new version that in key respects contradicts previous explanations.

The latest account includes details on how the team of 15 Saudi nationals sent to confront Khashoggi had threatened him with being drugged and kidnapped and killed him in a chokehold when he resisted. A member of the team dressed in Khashoggi’s clothes to make it appear as if he had left the consulate.

Turkish officials suspect Khashoggi, a Washington Post columnist, was killed inside the consulate by the team of Saudi agents and his body cut up.

Trump’s comments about the incident in recent days have ranged from threatening Riyadh with “very severe” consequences and warning of economic sanctions, to conciliatory remarks emphasising the kingdom’s role as an ally against Iran and Islamist militants, as well as a major purchaser of U.S. arms.

“I am not satisfied until we find the answer. But it was a big first step, it was a good first step. But I want to get to the answer,” Trump told reporters this weekend, when asked about the Saudi investigation and Riyadh’s subsequent firing of Saudi officials over the incident.

In an interview with the Washington Post, Trump said that “obviously there’s been deception, and there’s been lies”.

For Saudi Arabia’s allies – particularly in the West – the question will be whether they believe that the prince, who has painted himself as a reformer, has any culpability. King Salman, 82, had handed the day-to-day running of Saudi Arabia to him.

A leading Republican US senator said he believed the crown prince was behind the killing, adding that the Saudis had lost all credibility in their explanations of his death.

“Yes, I think he did it,” senator Bob Corker, chairman of the Senate Foreign Relations Committee, said in an interview with CNN.

Saudi Arabia’s account of the incident has changed multiple times. The authorities initially dismissed reports that Khashoggi had gone missing inside the consulate as false and said he had left the building soon after entering. When the media reported a few days later that he had been killed there, they called the accusations “baseless”.

Britain’s Brexit minister, Dominic Raab, said the explanation that Khashoggi had died after a fistfight was not believable.

Eighteen Saudi nationals had been arrested, the Saudi public prosecutor said in a statement.

The king also ordered a restructuring of the intelligence service, to be led by Prince Mohammed, suggesting the prince still retained wide-ranging authority.

French finance minister Bruno Le Maire said Saudi Arabia’s admission that Khashoggi had been killed was welcome “progress”, but urged the kingdom to follow through with a full and transparent investigation.

“I note that the Saudi authorities have changed tack, admitted the facts and accepted some responsibility, so we’re making progress,” Le Maire said on France 3 television. “But full light needs to be shed.”

Some governments and prominent executives have said they would pull out of an upcoming investment conference in Saudi Arabia. Among the latest, the government of New Zealand said it would not attend, as did the head of the main banking unit of Japanese financial group MUFG.

According to the senior Saudi official, the Saudi team rolled up Khashoggi’s body in a rug, took it out in a consular vehicle and handed it to a “local cooperator” for disposal.

One of the operatives then donned Khashoggi’s clothes, eyeglasses and Apple watch and left through the back door of the consulate to make it look like Khashoggi had walked out of the building, the senior Saudi official said.

Turkish investigators are likely to find out what happened to the corpse “before long”, a senior Turkish official said on Saturday.

Officials told Reuters in Turkey on Thursday that Khashoggi’s remains may have been dumped in Belgrad Forest adjacent to Istanbul, and at a rural location near the city of Yalova, 90km (55 miles) south of Istanbul.

Turkish sources say the authorities have an audio recording purportedly documenting Khashoggi’s murder inside the consulate.

Pro-government Turkish newspaper Yeni Safak, citing the audio, said his torturers cut off his fingers during an interrogation and later beheaded him.

Trump said no one from his administration had seen video or a transcript of what happened inside the consulate.