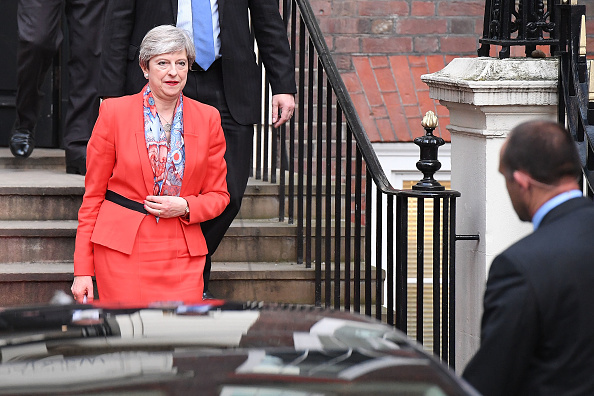 The United Kingdom is set for a hung parliamnet after a snap general election in which Conservative Prime Minister Theresa May lost seats and the rival Labour Party gained ground.

After all 650 seats were declared, the Conservative Party had lost 12 seats, bringing it to a total of 318, while Labour gained 32 to reach 262.

This left both parties short of the 326 seats needed for a majority, leading May to unite with Northern Ireland’s Democratic Unionist Party (DUP) to form the next government.

“What the country needs more than ever is certainty, and having secured the largest number of votes and the greatest number of seats in the general election, it is clear that only the Conservative and Unionist party has the legitimacy and ability to provide that certainty by commanding a majority in the House of Commons,” she said in a sombre statement after returning from Buckingham Palace with permission to form a new government from Britain’s Queen Elizabeth II.

Among the UK’s smaller parties, the DUP gained two seats to reach a total of 10, the Liberal Democrats gained three seats to reach 12 and the Scottish National Party lost 19 seats to total 35.

Labour Party leader Jeremy Corbyn called on Theresa May to resign after the result, which comes 11 days before the country begins Brexit negotiations.

“She wanted a mandate. Well, the mandate she’s got is lost Conservative seats, lost votes, lost support and lost confidence. I would have thought that is enough for her to go,” he was quoted as saying.

May, who accepted victory in her Maidenhead constituency, still asserted her party had won the most seats and insisted long-term stability remained.

But the result is expected to lead to anger within the Conservative Party, where many deemed the abrupt calling of the election unnecessary, and May’s future is uncertain.

The Prime Minister refused to debate on television with other party leaders since calling the election in April and suffered embarrassment after several policy missteps including plans to make elderly people pay for state-funded care at home if they have more than GBP100,000 in assets.

Read: UK general election: What will it mean for trade with the GCC?

The two recent terrorist attacks in Manchester and London also likely impacted voting decisions after Labour drew attention to the cutting of 20,000 police officers during May’s tenure as home secretary.

The result leaves Britain in a less certain position regarding its Brexit negotiations.

The DUP campaigned for Brexit but argues in its manifesto for the maintaining of a “seamless and frictionless” border with Ireland.

This is expected to mean a softer Brexit negotiating position than may have been the case under a Conservative majority.

As the election result became clear the UK’s pound sterling currency dropped dramatically against the dollar from 1.2954 to under 1.2720 before recovering slightly to 1.273.