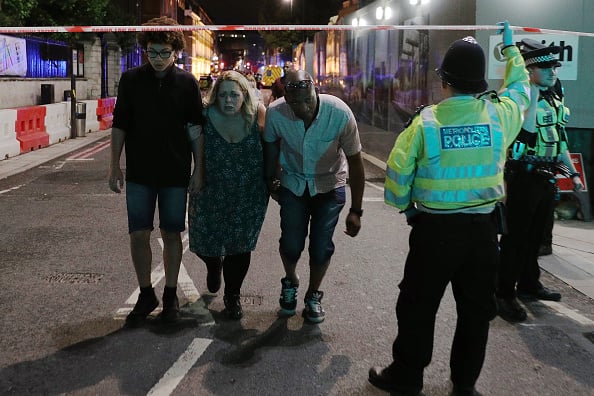 The UAE’s Ministry of Foreign Affairs has condemned last night’s terror attack in London, which saw at least 48 people injured and seven killed.

Three attackers drove a van into crowds on London Bridge before stabbing a number of people in nearby Borough Market at around 10:08pm on Saturday.

Reports suggest the men attacked diners and revellers in nearby pubs and restaurants after abandoning the vehicle.

London’s Metropolitan Police said all three attackers were shot dead within minutes of the attack unfolding.

The men were seen wearing suicide vests, later, found to be fake.

In a statement, the ministry emphasised “the UAE’s firm stance against extremism and terrorism, stressing that London’s terrorist attacks reaffirm the urgent need for concerted international efforts to combat terrorism in all forms and manifestations,” according to state news agency WAM.

The ministry went on to call for joint cooperation and expressed its condolences to the families of the victims and a speedy recovery to those injured.

Earlier in the day it also called on Emiratis in the UK capital to avoid the London Bridge area via Twitter.

In light of reports about #LondonBridge & #BoroughMarket terrorist attack, we urge #Emiratis to avoid the area & follow advice @metpoliceuk pic.twitter.com/l0hvqXFl6W

The attack occurred just days before the UK holds its general election and less than two weeks after a suicide attack at an Ariana Grande concert in Manchester left 23 dead and more than 100 injured.

Read: Manchester concert attack: At least 22 killed, no official claim as yet

Campaigning halted on Sunday but Prime Minister Theresa May said it would resume on Monday and the Thursday election would take place as planned.

In a statement she said “enough is enough” and suggested there was “far too much tolerance of extremism in our country”.

“We cannot and must not pretend that things can continue as they are,” she added.

“We are experiencing a new trend in threat we face as terrorism breeds terrorism.”