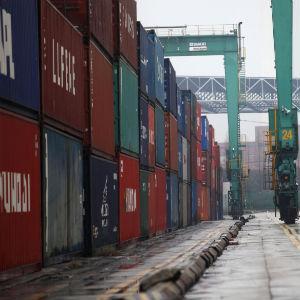 The UAE has fallen three positions to rank 19th in the biennial Global Enabling Trade Report 2012 released by the World Economic Forum (WEF).

Although it ranked first in the Arab region and ahead of economies such as France, Ireland and the US, the UAE’s position fell because its trade policy is less open than in previous years, said the WEF report.

“The country’s main constraints remain its high domestic tariffs and the high trade barriers faced by the country’s exporters abroad,” it said.

“The country’s share of duty-free imports has decreased from 29 to 24 per cent and its weighted tariff rate has increased, particularly for agricultural products.

“At the same time, UAE exporters now face a lower margin of preference in key export markets,” it said.

However, clearance of goods at the border is very easy, the availability and quality of transport infrastructure is very good, and the country also has high physical security, said the report.

“Despite progress achieved in these areas, the UAE could benefit more from trade and its favorable geographic location on the Europe-Asia trade route if it continues to liberalise its transport services,” it added.

The report also recommended that the UAE government places a “higher priority” on the use of broadband connections, which would facilitate trade and increase internet use.

In the region, Oman came second on the list at the 25th spot, and was followed by Saudi Arabia, which jumped from the 40th position in the previous list to 27 this year.

“The efficiency of Saudi Arabia’s customs services and border administration are important factors in facilitating trade,” said the report. The country also benefits from a “solid institutional framework with transparent and efficient government institutions and well-defined property rights,” it said.

“Customs procedures are efficiently organisedit is neither costly nor burdensome to import and export goods, although it may be time consuming,” it added.

However, more openness to foreign competition in the logistics sector will promote an efficient logistics and transport industry in the country, and support the further diversification of exports, said WEF.

WEF’s global trade report is based on its Enabling Trade Index, which measures the extent to which economies have developed institutions, policies and services to facilitate the free flow of goods between borders.

It assesses four key areas of performance including market access, border administration, transport and telecommunications infrastructure and the business environment.