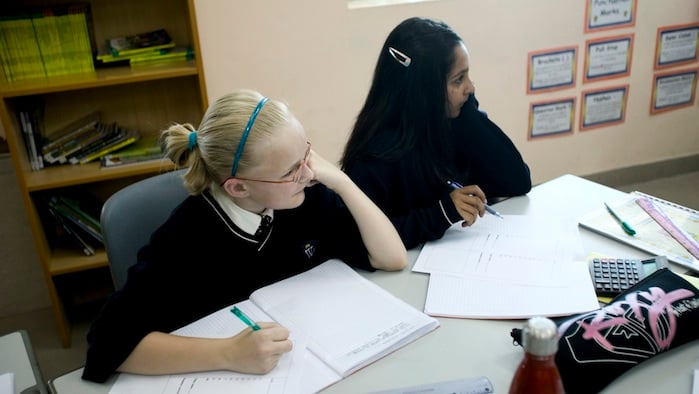 A recent study conducted by HSBC has revealed that the UAE has the second highest school fees in the world.

According to the study, it costs approximately $99,378 or Dhs365,025 to educate a child from primary school through to university in the UAE.

Hong Kong took the first spot, with parents spending about $132,161 per child. 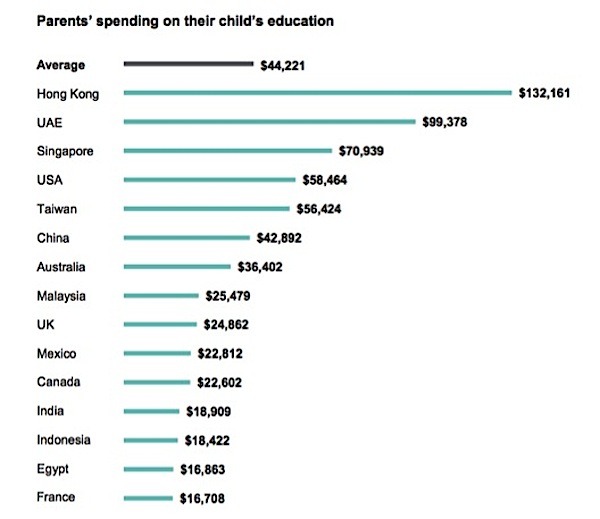 The survey conducted falls under HSBC’s The Value for Education series, which polled 8,481 parents from 15 different countries and territories.

Nearly two thirds of Dubai schools can increase fees by 3.6% or more

It reveals insights on parents’ opinions on studying abroad, reasons for pursuing a degree internationally, digital learning and how they intend to provide the funds to educate their children.

The study found that 74 per cent of parents are funding their child’s education from day-to-day income. Only 36 per cent said they had general savings, investments or insurance, and 21 per cent had specific education savings or an investment plan.

It also showed that parents gave up several preferences or luxuries in life in order to provide sufficient funds for their children’s education.

Of those surveyed, 31 per cent said they gave up ‘me-time’ or hobbies, 25 per cent stopped leisure activities or going on holidays, 23 per cent changed working styles, and 20 per cent developed different social circles.

Up to 39 per cent of the parents wished they had started saving for their children’s education sooner.

Group head of Wealth Management at HSBC, Charlie Nunn, said: “With the rise of the information economy and a challenging job market for young people, education has never been more important than it is today. Parents know this and they are willing to go to great lengths to secure the right educational opportunities for their children.”

Despite high education costs, the report also revealed that 91 per cent of the surveyed individuals would prefer to have their children earn postgraduate degrees.

More than three quarters of the parents believed that completing a postgraduate degree would offer their children better employment opportunities.

Meanwhile, over 41 per cent of the parents also hope for their children to pursue a university education abroad. The reasons for this were not restricted to better employment opportunities, but also extended to the development of foreign language skills (49 per cent), exposure to new experiences (48 per cent), increasing self-confidence (44 per cent), and allowing their children to gain independence (43 per cent).

Globally, the survey also found that 60 per cent of parents are considering online education for their children. Interestingly, that percentage increased to 69 per cent in the UAE. 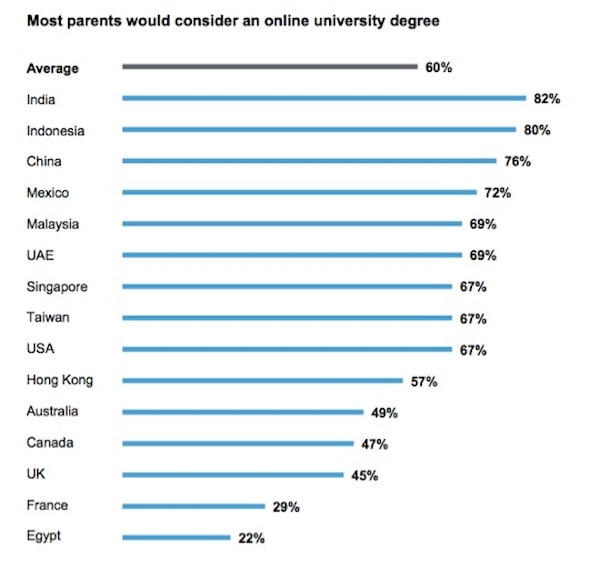 The two most common reasons for opting towards an online education were less money invested on travel or living costs (52 per cent), and dramatically less tuition fees and activity expenses (50 per cent).

Other benefits included the comfort of education from home, developing technological skills and more opportunity to work and study simultaneously.