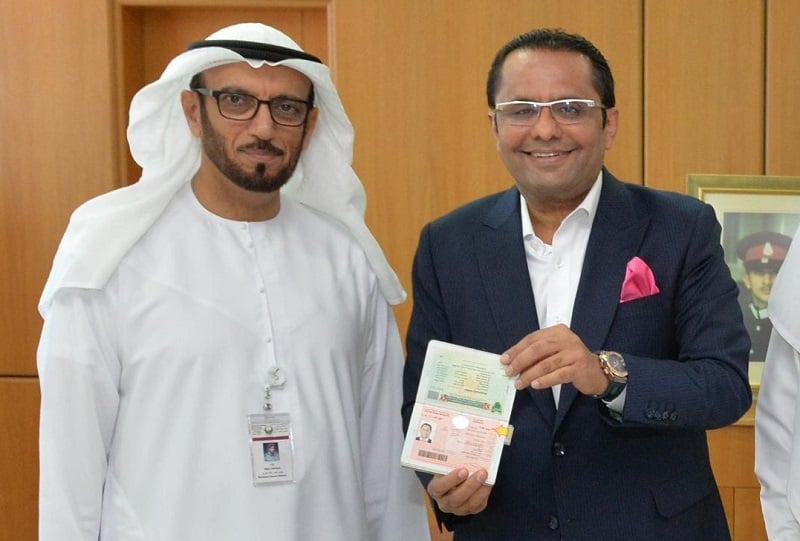 Two more Indian businessmen have received 10-year residency visas in the UAE, following the implementation of the scheme last month.

The visas were given to Dr Azad Moopen, founder chairman and managing director of Aster DM Healthcare, along with his wife Naseera Azad, as well as Danube Group founder and chairman Rizwan Sajan.

Previously, Vasudev Shroff, chairman of the Regal Group, and Khushi Khatwani, head of the Khushi Group of Companies, got their 10-year UAE visas stamped on their passports on May 21.

“It is a privilege to receive the long-term visa as an acknowledgement of our efforts in the business front in UAE focusing on the healthcare sector of the country,” said Moopen.

“This gesture reinforces our commitment to UAE with more projects under Aster and Medcare.”

Starting from a single clinic in Dubai in 1987, Aster DM Healthcare now has 24 hospitals, 116 clinics and 219 pharmacies.

Danube’s Sajan, who came to the UAE in 1991, received the 10-year visa stamped on his passport from the General Directorate of Residency and Foreigners Affairs (GDRFA) in Dubai.

“This is a great moment as we have been waiting for this for a long time,” he said.

“This is the beginning of a new chapter in the UAE economy as it further liberalises the economy to attract more investment. Initiatives such as the 10-year visa, 100 per cent ownership of companies in selected economic sectors and finally the permanent residency – are some of the game-changing developments that will re-define our relationship with this wonderful land of opportunities.

“This is a great moment not only for me but for millions of foreigners living in this country. I’m sure the scope of these initiatives will expand gradually to include more investors, entrepreneurs, scientists, philanthropists, innovators and highly-skilled professionals,” he added.

Sajan’s net worth is estimated to be more than $1bn, Danube said in a statement.

In January, the government granted the first batch of long-term visas to 20 scientists who were the winners and finalists of the Mohammad Bin Rashid Medal for Scientific Excellence.

Those granted the 10-year visas primarily included professors working at Khalifa University and UAE University as well other academics and researchers.

UAE gets 6,000 applications from investors, entrepreneurs for long-term visas

Last month, the UAE also announced the launch of a permanent residency scheme for expatriates dubbed the ‘Golden Card’.

Exclusive: Dubai’s Danube chairman on why the UAE will see a V-shaped recovery from the Covid crisis