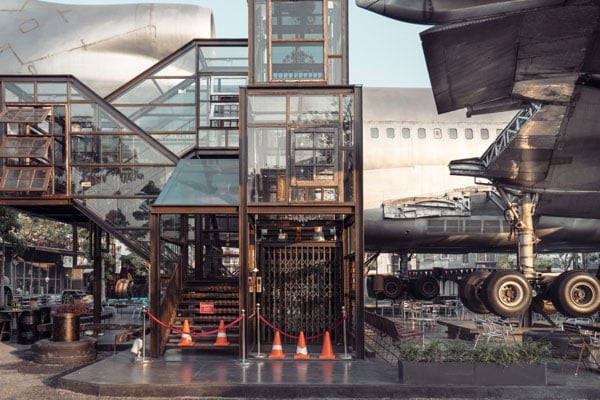 One of the first Thai words that foreigners learn in Bangkok is ‘farang’, or ‘foreigner’. And no wonder. More than 20 million farang descend on the temples and temptations of Thailand’s capital every year, making it one of the planet’s most visited cities.

You run into each other in hotels and restaurants, in the air-conditioned megamalls of Siam Square, at the teeming Chatuchak outdoor market and the Buddhist sites of Wat Pho and Wat Arun. Together, you jostle through the crowds along the buzzing Sukhumvit strip and the backpacker haven of Khao San Road. And there you are again, venturing into the famous bars of Patpong and Soi Cowboy.

Fortunately, Bangkok is vast and fast-evolving, with many remote corners and newly minted hangouts. From upstart creative spaces and restaurants to the under-visited Thonburi district, Bangkok remains ripe for discovery.

“Are Tuk-Tuks and Pad Thai Really Thai?” That question, embossed on a wall, welcomes you to the recently reopened Museum Siam, an interactive, high-tech fun house whose motto is ‘Decoding Thainess’.

Exploring the galleries is like bouncing around a pinball machine: surfaces light up, bells ring and characters and objects suddenly pop out of floors and walls as you accumulate knowledge about Thai history, royalty, fashion, food, Buddhism and pop culture. Spoiler alert: Tuk-tuks arrived in Thailand via postwar Italy and Japan.

Urban chaos gives way to village-like (and farang-free) tranquility across the nearby Memorial Bridge. Featuring an ersatz mountain dotted with Buddha statues, the rock garden of the Wat Prayoon complex is a haven of grottoes, pavilions, roaming turtles and fish ponds. Alongside it, a soaring, white, bell-shaped chedi surrounded by 18 smaller white chedis is a simultaneously massive and minimalist monument. Go past the Church of Santa Cruz (originally constructed by Portuguese settlers; the present structure was rebuilt in the early 20th century) and follow the slim riverbank path to Kuan An Keng. The Chinese-built temple is adorned with red pillars, golden bells and sculpted dragons; beyond it, is the dazzling, multi- tiered, 19th-century Buddhist temples and bell tower of Wat Kalayanamitr. A ferry (THB5, or about $0.16) returns you across the river in minutes.

Gaggan is regularly ranked as Asia’s best restaurant. Don’t eat there. Just across the passageway is the less fastidious, less expensive, less-hyped, almost-brand-new and truly sublime dining experience known as Gaa, where you don’t have to book weeks in advance. (A few days are enough — for now).

For most travellers, Chinatown’s appeals are street food and the huge gold Buddha in Wat Traimit. But the small nearby lane called Soi Nana is a gold mine of new bars. The red neon, flickering candles and dark wood at Ba Hao evoke a sultry den from 1930s Shanghai.

Cheap, noisy, no-frills, white- tiled, overbright: Krua Apsorn bears all the signs of a top- notch traditional eating room. Skip the crab omelette — locally famous but overrated — for spicy seafood specimens like silvery sillago fish (in a fiery soup of beans, peas and leaves) and plump tom yum shrimp (in coconut-milk broth with mushroom chunks). Lunch for two costs around $21. For dessert, nearby Mont Nomsod is a Bangkok institution, beloved for its thick white toast spread with sweet toppings ($0.77) like coconut-egg custard, and chunky corn soup.

What happens to old post offices in the internet era? Hopefully they end up like the Bangkok General Post Office, which now houses the Thailand Creative and Design Centre. In addition to a library, studios and a large exhibition area — recently host to an excellent elucidation of Thai architecture — the centre features a boutique selling hipster sneakers by Truly, minimalist wooden clocks from Pana Objects, and other Thai products.

Up the road, Warehouse 30 ups the neighbourhood’s creative quotient with an indie documentary cinema, a gallery-cafe and shops selling everything from steampunk fashion to vintage stereo equipment.

Like Thai boxing and Thai spices, Thai massage is not for the weak. During a 60-minute session ($11) at Ruen Nuad — a humble wooden house amid the skyscrapers and crowds of downtown Bangkok — you become the soft target of the masseuse’s powerful knees, elbows, forearms and fists as he or she stretches you like Play-Doh, twists you like Twizzlers, folds you like origami and presses you down like an overstuffed suitcase. All the pulling, prodding, pummelling and, yes, punching can make you feel like the dummy in a model-mugging defence class, but you will walk outside feeling as limber and light as a ghost.

“In praise of the wondrous beauty of nature” reads the menu cover at Cuisine de Garden: Unexpected words in a tall, dense metropolis with few green spaces. But this glassy and hushed restaurant that opened last year offers an organic enclave amid the asphalt and concrete. The project starts with the décor — slim tree trunks stretch from floor to ceiling, like an indoor forest — and continues with a four- course menu ($49) and various amuse-bouche whims.

The line-up might include a leaf-shaped brioche served atop a real leaf, a shrimp-mussel- salmon-crab quartet deployed on small white stones or a soft-boiled egg atop a nestlike structure of crispy rice noodles and a bed of pulled chicken: a gooey, warm, crispy and meaty interplay of farmyard flavours.

A tranquil and spiritual side of the city appears when you motor through the water channels of Thonburi in a canopied wooden boat. Sinchai Travel, aka Longtail Boat Tour, has its ticket office on Sathorn Pier. A 90-minute trip costs up to $55 per person.

Bangkok’s towers vanish and soon you are among old wooden canal houses and plank piers where children fish, white cranes swoop down, women in motorboats pass with skewered meats for sale, and magnificent temples and mountainous Buddhas suddenly materialise.

To reach Oldman Coffee, drop your car or taxi at the highway overpass, duck under the fuselage of the decommissioned Lockheed passenger jet, follow the gravel path past the toilet- plunger-toss arcade game, turn left at the helicopter and go past the Victorian-style photo portrait studio. If you reach the huge metal skull the size of a garbage truck, you’ve gone too far. Such are the attractions of ChangChui, a new alternative theme park and Gothic wonderland, complete with shooting gallery, food stalls, vintage shops, artist studios, open-air bars and concert halls — to say nothing of deactivated torpedoes, disused tractor- trailers, human-size robots and an exhibition room with skulls and stuffed birds. If you need lunch, try Insects in the Backyard restaurant. At your own risk.

Opened in late 2017, the 231-room Lancaster Bangkok is a spacious and luxurious newcomer with a gym, spa, restaurant, rooftop pool and multiple bars. Double rooms in February from $103. Alternatively, save money at Old Town Hostel — a 1920s building with 12 dormitories and nine private rooms — then splurge at the adjoining 80/20. Decorated in an industrial style, the gallery-restaurant serves daring, playful and delectable neo-Thai concoctions. Double rooms from $25.

In the heart of the emerging Chinatown bar scene, 103 Bed and Brews has six rooms with tasteful retro furnishings and a cool cafe with multiple cold brew coffees and Thai microbrews. Rooms from $38.