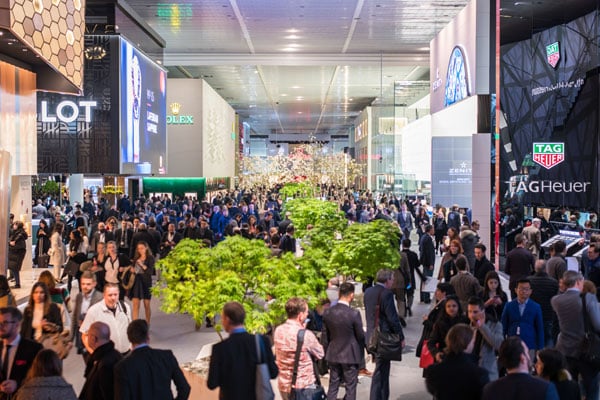 Baselworld is by far the single biggest luxury watch fair in the world. Every March, a motley mix of established industry heavyweights and emerging niche brands come together to showcase their novelties. We’ve sifted through hundreds of watches from dozens of brands to present the definitive guide to this year’s leading trends and coolest watches.

If you were rocking a fitted three-piece suit from an Italian master tailor, you’d be a long way off the mark to slap a nylon-strapped digital watch on your wrist. What you need is a proper dress watch. Baselworld 2018 had its fair share of these timepieces, but one that stood out from the crowd was the Breguet Classique tourbillon Extra-Plat Automatique 5367. An 18k rose gold case, fluted caseband, a grand feu enamel dial and those leather straps are all selling points.

The dealmaker though is that ultra- thin tourbillon that lifts this timepiece into the realm of mythical watches. Another dress watch that caught our attention at Basel is the Patek Philippe Golden Ellipse Ref 5738R. With its elongated black dial and applied gold indices, it’s a black-tie watch we all really need.

Carbon has always been a favourite muse among watchmakers. This year though, they’re taking it to the next level. The Hublot Big Bang MP-11 in 3D Carbon sourced its polymer matrix composite reinforced by a 3-d carbon weave from none other than the US military. That makes for a tough-as-nails and very light (it weighs only 90 grams, including the strap) timepiece that can take everything you throw its way, including the kitchen sink.

Then there’s the Bulgari Octo Finissimo Minute repeater Carbon that shuns gold, titanium or platinum traditionally used for the cases of minute repeaters, and trades it in instead for some blacked-out carbon magic instead. The result is a devastatingly handsome timepiece which, might we add, is the thinnest minute repeater in the world too.

3. Paint the town blue and green

The colours of the season were blue and green. Making the case for blue were timepieces like the Omega Seamaster 300M and the Grand Seiko Calibre 9S 20th Anniversary Ref SBGH267. However, a more unconventional choice, green, saw several takers this year.

Waving the flag for camp green was H. Moser & Cie’s Endeavour Perpetual Calendar Purity Cosmic Green that famously doesn’t have the brand’s name on the dial and the Glashütte Original Sixties collection that doesn’t just make green look like the hottest colour of the season but also reminds us that German fine watchmaking can certainly hold its own when it comes to its Swiss counterparts.

Throwback timepieces are nearly always a hit because they riff off tried-and-vetted concepts that have a dedicated fan base. Case in point: The ‘Pepsi bezel’ on the Tudor Black Bay GMT might remind you of the brand’s sibling – Rolex. While the look of the Black Bay GMT’s is that of a robust Fifties dive watch, there’s nothing mid- century about its mechanics. Tudor has gone to great lengths to “own” this timepiece, as you will notice from the snowflake hand that indicates the second time zone. The automatic- winding COSC certified chronometer features the Manufacture Calibre MT 6552 and has a 70-hour power reserve.

The Rolex DeepSea Sea-Dweller Ref 12660 is nothing short of a grail dive watch. It can descend to depths of nearly four kilometres below the surface. This year, Rolex kitted it with the Calibre 3235 that was already worked into Seadweller 4000. Another dive watch that made big waves at Baselworld 2018 was the Blancpain Fifty Fathoms Bathyscaphe Day Date 70s limited-edition automatic watch that has a power reserve of 120 hours. The fact that a day-date has been added to a dive watch, signals the brand’s intent to position the iconic Fifty Fathoms as not only one that is to be strapped on during diving expeditions, but a timepiece that also works well as an everyday companion on your wrist.

Military watches mostly have fantastic stories to tell, and the Longines Military Watch is no exception. It is inspired by a timepiece supplied to the Royal Air Force pilots during World War II. The faux patina dial gives it a vintage feel. The pattern of dots that appear on the dial have been applied at random, which in addition to adding an aged look at the dial also means that no two watches will ever look the same. Turn it over, and you’ll see a solid steel caseback (just like you would in the original Forties version of the watch). Behind it is an L888 automatic movement that beats at 25,200vph. At under Dhs10,000 ($2,723), it’s a value proposition you shouldn’t pass up once it goes on sale later this year.

The subject of diamonds on watches is a delicate one. Done wrong, you can look like a nineties rap star who still thinks that the amount of ice on his wrist and neck is directly proportional to the size of his bank account. Done right though, your timepiece won’t scream for attention, but command it instead. An example lies in this Rolex Rainbow Daytona in everose gold Ref 116595 which has 36 baguette-cut sapphires on its bezel, 56 brilliant-cut diamonds in its mid-case, the counters on the dial are in 18kt pink gold crystals and the hands are rose gold. Admittedly, on paper, it sounds excessive. But take a look at it here and you’ll see that it looks like an elegant piece of jewellery we can all get behind. Rappers, take note.

Today, a cockpit is governed by a dizzying array of electronics that control the plane. But back in the first half of last century, flying was an act of daredevilry that required immense amounts of skill. Pilot’s watches that debuted at that time weren’t adornments, but tools that these pilots would bet their lives on each time they went up in the air. Even if you’ve never been anywhere near a cockpit, it’s worth stocking up a pilot’s watch within your collection. You’d do well to get yourself a Zenith Pilot Type 20 Extra Special, which features a 40mm bronze case, a distinctive onion crown and an in-house Elite 679 movement. Other pilot watches that debuted at Baselworld 2018 were the Breitling Navitimer 8 B01 Chronograph 43 and the Bell&Ross BR03-92 Nightlum.

10. The evolution of women’s watches

The warped notion that women’s watches are best served with an overdose of precious stones across their surface is a trend that Baselworld 2018 has thankfully dismissed. There’s proof of that in the 36mm Longines Legend Diver and the 32mm Tudor Black Bay GMT none of which had precious stones on it. But leave it to industry leader Patek Philippe to demonstrate how to get it right as it has done with the new 37.5mm Patek Philippe Calatrava Pilot Travel Time Ref 7234R. The brown sunburst dial and rose gold case are aesthetics that don’t distract from the mechanics underneath the dial – the automatic caliber 324SC FUS which has a Spiromax spring and a Gyromax balance – in plain speak, that means you don’t have to handle this watch delicately for fear of its mechanics going out of whack at the slightest knock on its surface. But then again, you’d expect that already from a pilot’s watch, wouldn’t you?