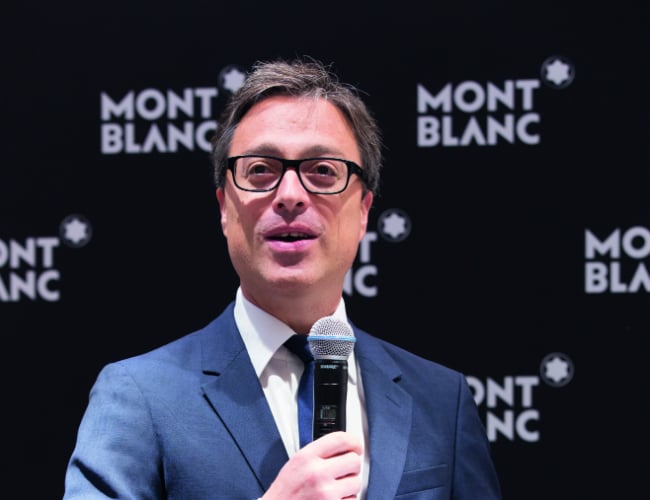 For luxury brands across the globe, the bright lights of Dubai – and the disposable income of its residents – continue to be a major draw.

Despite slowing economic conditions across the GCC, the luxury market has continued to grow and many brands see further opportunities in the UAE in particular.

Indeed, following a study into the global luxury market, Herve Ballantyne – partner at Deloitte in the Middle East – said: “The Middle East represents a big opportunity for luxury brands. Luxury malls in Abu Dhabi and Dubai have helped put these cities on the map for the industry, and the UAE as a whole continues to enjoy strong growth.”

With such fertile ground for these brands, Dubai remains the region’s luxury epicentre, prompting some well-established companies to deepen their roots in the emirate.

This is certainly the case for German manufacturer Montblanc, a brand renowned for its luxury writing instruments, watches, jewellery and other high-end goods.

In October the company relaunched its flagship boutique at Dubai Mall, signalling its confidence in the UAE’s luxury market, and highlighting the value it places on the city’s commercial status.

“Dubai is definitely a very important market for us,” confirms Nicolas Baretzki, Montblanc’s CEO, as we sit in the boutique’s ultra-comfortable VIP room.

“In fact, this particular boutique is one of our top five boutiques in the world. We have 275 of our own boutiques and more than 500 with our franchise partners, and this one is in the top five. So it’s extremely important.”

The flagship store is now one of the few in the world that showcases Montblanc’s most outstanding and iconic items – something Baretzki says truly sets it apart from the majority of the brand’s other outlets.

“What we are doing in Dubai is not just a boutique for us; we call it the High Artistry boutique,” he says.

“High Artistry because these are the few boutiques in the world where we really showcase the high-end pieces of Montblanc. This is why you have here the exceptional Villeret watches, the exceptional latest High Artistry writing collection, and the limited edition and very exclusive – and expensive – pieces.

“Even this VIP room we have, we wanted people to be able to come, sit comfortably, talk and look at different items in peace. I think our customers really appreciate that – especially customers from the region.”

The launch of the flagship boutique comes after difficult times for the region’s luxury market, which has slowed in recent years on the back of low oil prices, high gold prices and an increased cost of living. But recent performance has been encouraging, with Deloitte Global’s Global Powers of Luxury Goods 2017 report showing that 70 per cent of consumers in emerging markets – the UAE included – have increased their spending on luxury brand shopping.

And Baretzki is pleased with Montblanc’s performance over the past year, despite the challenges much of the industry has experienced.

“Last year was clearly a difficult year for the luxury industry, but Montblanc was quite well preserved from that,” he says, adding that it was identified as one of the top performing brands for parent holding company Richemont last year.

He continues: “We still had a nice growth even in that difficult context, which is very encouraging. And I don’t see a decrease of business in Dubai – in fact I see a nice development of business here. Not only with Middle Eastern customers, but Indian customers, European customers, Chinese customers and many more. It’s still a very vibrant city – a city where business is doing well. Being a tourism hub is very important and the weakening of the US dollar has also made it a very attractive place to shop today.”

Speaking with confidence about the company’s strategy in Dubai, the CEO adds that there is a positive atmosphere within Montblanc regarding future growth in other markets – largely borne out of its successful entry into countries such as India and China.

“We have always been a luxury maison to enter new markets or growth markets at a very early stage,” he says.

“For example, Montblanc was the first official luxury maison to import goods into India – 24 years ago. We were the first ones to obtain the license to do that. And that story has created that notion of reach at Montblanc – we believe we have to be where the customers are. It’s important for us to be in all the key cities.”

With a presence in 68 cities in China, six cities in India, and many more cities across emerging and mature markets, Baretzki aims to continue this hitherto successful approach in the months ahead.

“Strategically in the region we are very much focusing on India, which is an important market for us,” he adds.

“We are also focusing on Saudi Arabia, and we have quite a few projects coming up in the next six months.

“And then there is Africa. This market is really opening up and now is the right time to enter. And we will do that in our way – entering and creating boutiques, showing who we are, and educating so that in 10 to 15 years we will really see the benefit.

“The last part is Iran, which is also a big market – a big population. The middle class is coming up there and I think it will be a big market in the future.”

It’s not just new markets the company is looking into. There has also been a significant move into a different product segment of late, with the brand’s first smartwatch – the Summit – being launched earlier this year.

And while much has been made of the rivalry between digital and analogue timepieces, Baretzki believes there is not only room to coexist, but lots of innovative ways to explore hybrid watches in the future.

“Perhaps it’s a bit of my millennial thinking – even though I’m not actually a millennial – but I bridge analogue and digital very easily. I don’t think they oppose. I just think they fit different parts of your life. A digital watch is extremely useful and fun, and at the same time I come from the watch industry and am a big lover of watches.

“We don’t foresee the end of traditional watches – we actually want to develop further these kinds of watches. But Montblanc is a lot about innovation and is sometimes about being disruptive. So it was important that we could have our say in this area, and that we did it in our own way.

Despite being somewhat coy about future smartwatch plans, the CEO emphasises his belie that there is a lot of potential in the digital-analogue crossover, especially when bringing in new customers.

“I hope we have brought some more millennials and younger customers to the maison, and that eventually we will be able to convert them to a traditional watch,” he says.

Another potential shift in the company’s target customer could see women given more options at the traditionally male boutique – a possible move driven by the fact that 40 per cent of traffic through the brand’s doors is female. 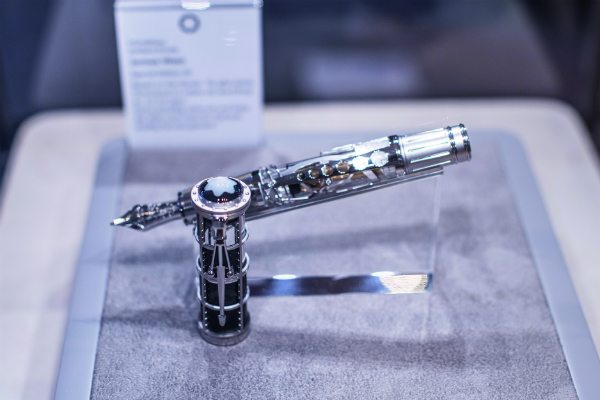 “The ladies who come to our boutique are mainly buying for their husbands and sons, but I do believe that if we have the right offer for ladies it could be extremely successful,” says Baretzki.

“We just started the launch of the Marilyn Monroe edition writing instrument, which is a very strong presence inspired by the famous red dress of Marilyn. I think it would be a shame to have such a large crowd of women in our boutiques and not offer any opportunity to look at something for themselves.”

But while it might appear that Montblanc could be on the verge of a new era, don’t be fooled into thinking that the company isn’t used to making bold steps in new directions.

Innovation is clearly an important part of Montblanc’s DNA, and while change is inevitable in this respect and many others, the key to ensuring its success is in continuity. A point well illustrated by the CEO himself, who was elevated to the top job in April, having served three and a half years under his predecessor, Jérôme Lambert.

“I’m quite lucky because I’ve been with the company for four years, so I feel like a had a lot of opportunities to work closely with the former CEO, and in that respect there’s a lot of excitement to be able to continue the past,” Baretzki explains.

“I’ve been part of the decisions in the past for years, so it’s not like I want to change everything. But at the same time, Montblanc is about constantly innovating, conquering the segment, entering into new markets.

The exact nature of these surprises remains a closely guarded secret, but Baretzki does reveal a few hints as to their direction.

“Definitely the High Artistry is something very important,” he states.

“I believe that it’s an image driver and a great demonstration of our capabilities when it comes to craftsmanship. I want to develop that high-end segment – I think it’s extremely important.

“I also believe that the maison is transforming and that leather is becoming more and more important – bringing that touch of luxury lifestyle that will be important to the future of Montblanc. It will be important in recruiting millennials and building that relationship.”

One other major focus for the CEO and his company will be the recently-announced Montblanc museum – due to open in Hamburg, Germany, in 2020 – a project that Baretzki says will champion the art of writing apparatus.

Indeed, as we part company, Baretzki is confident about the future of high-end writing tools, even as we sink deeper and deeper into the world of smart technology.

“I hope and I believe that writing instruments will become more and more important – even though we are all on our digital tablets and phones,” he says.

“If you want to have singularity, if you want to show that you are maybe a bit more elevated, a bit more cultivated, writing can be a very important way to differentiate yourself.”

There’s no question that Montblanc has continually found ways to differentiate itself over the years, and with Dubai’s new flagship store already under his belt, Baretzki clearly intends to take the company to ever higher peaks.