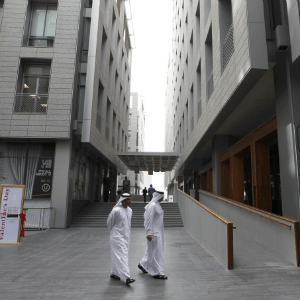 In a rapid reversal of fortunes, Dubai is attracting little of the negative sentiment that weighed heavily on the UAE during the financial crisis. Analysts say the economy will likely face some blowback from the turmoil, but the current low political risk is still the country’s trump card.

“A year and a half ago people looked at the UAE and Dubai in particular as the source of the region’s problems. But they’re now realising that it has real strengths,” said Simon Williams, HSBC’s chief economist for the Middle East and North Africa (MENA) region.

“There have been changes happening in the UAE for a year or more. But my only worry is that they will lose pace or momentum with the agenda so full with other items. In particular, I’m referring to issues around the business environment reforms, like the majority ownership rights onshore for foreign firms.”

Williams added: “If you consider this issue, which has always been a grievance, alongside the stable political and economic environment then it’s a more positive outlook.”

Most agree that no economies in the region qualify as ‘safe havens’ for investors, but the UAE and Qatar stand out as two countries least at risk.

But not all are convinced that the difficulties throughout the rest of the Arab world won’t catch on elsewhere.

David Butter, regional director for MENA at the Economist Intelligence Unit, offered a note of caution: “Your first reaction to events is how far will it spread. With what’s happened in Oman, Bahrain and Saudi Arabia, you think maybe it’s not that outlandish that there could be trouble in the UAE. This idea would of course be laughed out of court.

“You’ve got the presence of Emirati angst: the feeling that you’re not doing as well as others and did we really ask for our country to look like this? But Emiratis are in such a minority and expats are not going to band together in any unified force.”

In the last decade, Gulf states have witnessed the emergence of political debate around more open representative systems.

Only lately though has this led to protests, with the most recent coming from Kuwait [check] where thousands of demonstrators took to the streets calling for sweeping political changes.

The economic impact of the Middle East’s ongoing protests has been fairly benign in the UAE so far. Indeed, there have not been capital outflows, the Central Bank governor Sultan Nasser Al Suweidi said recently.

But demand for investment generally could be depressed, said Williams.

“It won’t feel the same kind of headwind as affected countries in the Gulf, nor will it be immune. The perception of the region has worsened in the last couple of months and until things become more stable, appetite for Middle East assets remains low.

“Whenever markets panic there will be some investors that can take advantage. In the current scenario this will be where markets are oversold for all the wrong reasons.

There have been reports that multinational companies with headquarters in New York have delayed plans to for senior executives to transfer to Dubai. This could be because of a distorted view of the true risks associated with the UAE compared to the region as a whole – what some call ‘decision-making by headlines’.

Jane Kinninmont, a senior research fellow at Chatham House, a London-based think tank, said: “But what does true risk actually mean though? A year ago analysts were saying in Africa’s risk profile, Libya and Eqypt’s true risk was low, but look what’s happened. Now, even though everyone assumes Dubai and Abu Dhabi will be okay, we’ve had some reminders that you just can’t predict these things.”

Meanwhile, as sensitive as the issue may be, there are opportunities for the UAE to capitalise on the unrest.

Butter said: “Traditionally, the UAE has taken advantage of conflict for a long time, for example the Lebanese civil war was fantastically positive for the economy, as was the Iran-Iraq war, Operate Desert Storm and for that matter the Second Gulf War.

“What the Lebanese civil war did was destroy Lebanon as the services centre for the Middle East. Dubai was ready and well placed to pick up the slack. There were less regulation but it was easier and more comfortable for expats to settle down.”

He added: “But the same doesn’t apply this time round. Because of the nature of this crisis things will be a bit trickier for the UAE. It’s not just an armed security issue, it’s more a problems that’s arisen from deep structural issues in Arab politics and society. The idea of changing the way things are done is spreading and because the UAE is like a microcosm of the Arab world, the danger of infection is that bit stronger.

Meanwhile, commentators have asked whether the UAE has a role to play in the clean-up operation in the post-revolution MENA countries. But UAE real estate firms that were previously keen on Libya and Egypt may find they have enough on their own plate at home, particularly in restructuring their debt obligations.

Kinninmont said: “It will also be interesting to see how the North African countries, that traditionally relied on European countries for trade, treat players in the Gulf.

“We may see some backlash against European partners that were once close with the previous regime. So Gulf investors could play a role on top of the current investment in property and tourism. Countries facing huge upheavals will need capital and job creation.

“In Egypt, you could see some of the new political players becoming more protectionist, but they will quickly realise they need foreign investment. And for Gulf countries there’s a role to play,” she added.

The UAE’s small national population and huge national resources stand it in good stead for social and political harmony for the time being, but the emergence of disquiet in Kuwait – which shares similar societal attributes – may raise the alert level.

Most independent analysts agree that in the longer term, with an educated population there will be more vocal demands about how the economy is handled and how things like sovereign wealth funds are managed. It would be wrong therefore to think there are no issues in all the Gulf states.