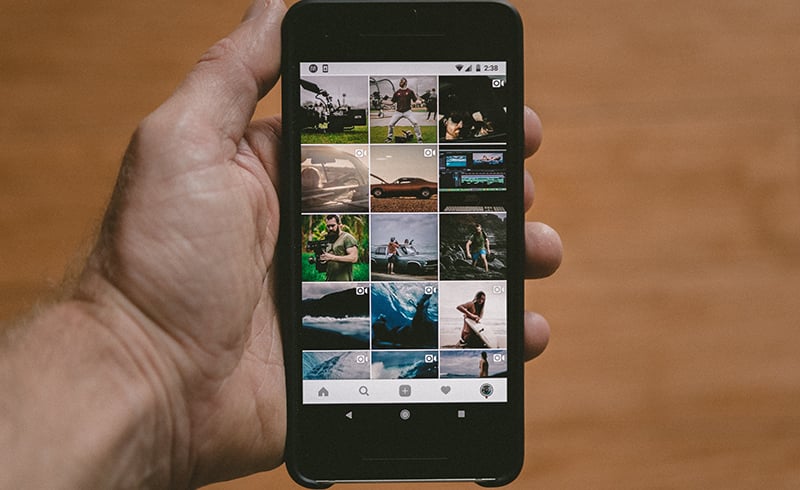 An Instagram handle that urges its followers to “Fly with Haifa” wouldn’t appear to be the best place to find content at a time when air travel is at a historic low.

Yet the account’s owner – UAE-based influencer and vlogger Haifa Beseisso, with close to 600,000 followers on the platform – has quickly pivoted from her typical globetrotting content.

Whether it be appearing in viral challenges with other influencers or connecting with the quotidian gripes of the quarantined – “who’s [sic] sleep cycle is kinda messed up”, she laments in one post – she is just one example of an industry whose creators are having to quickly adapt to a new normal.

The about-face in tone has been difficult for some. As desire for travel content wanes and conspicuous consumption has been widely criticised, content that typically performs strongly in the UAE has had to take a back seat.

Brands and agencies alike have been encouraging change in usual posting habits.

“Pay attention to what’s going on,” says Lama Abdelbarr, Digital Marketing and Communications lead, Middle East and Africa at Talkwalker. “Pay reference to what’s going on locally. Be mindful of your tone of voice at all times – we are talking about mass human tragedy here.”

“Rather than going for the hard sell, focus on consumers and what’s important to them right now,” adds Karl Mapstone, head of Middle East at Vamp.

“Try to entertain, educate or offer light relief. Suggest workouts or recipes they can try at home – or activities to keep children busy. I think people are responding well to brands that are showing their human side and influencers can really help deliver those personal messages.”

Mediakix estimated that advertisers were spending approximately $1.6bn on Instagram alone in 2018, with shopping features rolled out in September that same year proving lucrative for the platform.

Though year-on-year comparisons are not yet available, many influencers are seeing cancelled contracts as brands look to delay spring budgets and campaigns.

“Promotions of events that are no longer happening – or feel out of touch with the current climate – have been cancelled. That means that influencers, like many of us, are losing out on work. Those that rely on brand collaborations as their sole source on income are facing real uncertainty,” says Mapstone.

“Influencers across different sectors have been impacted by the current situation on many levels,” agrees Abdelbarr.

“In the most immediate and pressing sense, they are being affected financially. Some brands and agencies are holding payments or cancelling partnerships altogether in the midst of huge uncertainties.”

But, the new climate and remaining desire for content means that opportunities still lie ahead.

“Influencers are looking to diversify their skill sets and content streams as much as possible,” says Mapstone. “We are seeing fashion influencers doing house tours, letting their followers in on renovation projects they may not have shown. Or travel influencers sharing their home work-out routines. If they have a skill in photography or videography, they’re using them to land new brand deals.”

Historically, the social media landscape in the UAE has been bright, with one of the highest mobile phone penetration rates in the region and a keen appetite for online consumption. With 85 per cent of millennials in Saudi Arabia and the UAE following at least one social media influencer – and with platforms globally seeing increases in usage – now is a potentially lucrative time for brand awareness.

“According to data from Global Web Index, 44 per cent of internet users said they’ve been spending longer on social media because of the coronavirus,” says Mapstone.

In the MENA region, TikTok usage has “soared” over the last few weeks, says Abdelbarr. Talkwalker’s analytics platform analysed online conversations around TikTok in the MENA region and found a 148 per cent increase in the number of mentions from February 15 to April 14, with the UAE seeing mentions double from 12K to 25K in the same time period.

“The ‘TikTok generation’ is no longer just Gen-Z,” says Abdelbar. “The user bracket has expanded significantly as everyone is now looking for fun ways to pass the quarantine hours. Influencers and brands who previously dismissed the platform for its niche user demographic might want to reconsider it now.”

There is still inherent value in this sector – but its participants must be cautious of their message, especially when trust has dipped.

A 2019 survey from UAE-based digital marketing consultancy Bukhash Brothers found that 84 per cent of influencers do not disclose branded content or partners in their posts, with only 44 per cent using the “paid partnership” tag on Instagram when being paid by brands.

Another survey by BPG group and YouGov that polled 1,000 respondents aged between 18 to 35 across the UAE and Saudi Arabia found that 79 per cent have unfollowed influencers due to “increased promotional content and contrasting values and ethics”.

It is in times like these that social media influencers must be even more conscious about the way they connect with their audiences.

“Influencers need to go the extra mile to prove their relevancy and their pure engagement figures without the frills and thrills of fancy hotel stays, picturesque travel backgrounds or mouth-watering food arrangements,” says Abdelbarr.

That doesn’t mean solely concentrating on the crisis, she adds.

“We have actually registered a decrease in the number of mentions of Covid-19 over the last week as people start to adapt to the new normal. Think of how you can adapt to that as well. Think of ways you can contribute positively to your community online. Look for insights into what your audience is talking about while staying home.

“If an influencer can continue to engage and grow their audience during this period, they are one to look out for. This is what brands and agencies should be keeping an eye out for right now.”

With flexibility and a wide range of skills borne from necessity – most influencers do not have access to a full camera crew or production suites – it is these individuals that are well poised to capture a new captive market.

“From a business perspective, influencers are well positioned to adapt to lock down,” agrees Mapstone. “They’re used to creating content independently, often at home. So while brands are having to cancel location shoots that require big crews, influencers are able to fill that content gap. They’re known for being imaginative and innovative, so I think we’ll see some really creative work come out of this period.”

“The good news is that while influencers have been deprived of the content creation assets listed above, they have been given an unprecedented amount of attention,” adds Abdelbarr. “The audience is more available than they ever were before and gaining their attention is arguably much easier. The priority should be to keep it and leverage it.”

Their efforts have been paying off, with local agencies seeing higher rates of engagement than normal.

“We’ve already seen a huge spike in the number of home activities or live sessions hosted online,” says Abdelbarr. “That being said, influencers shouldn’t overdo it either. Not everything can be made into a live session or a virtual experience. These nuances will make or break a personal brand.”

Mapstone adds: “Most of the influencers we have spoken to have seen an increase in their engagement levels. They have more time on their hands to create content, answer Q&As and interact with their audience. This – combined with the fact that their followers are experiencing the same situation – makes their connection feel closer than ever. I think both parties are getting a lot from that shared perspective.”

With at-home and DIY content booming, brands are poised to take advantage of a new online audience.

“E-commerce campaigns are a natural fit for influencer marketing as they are easy to track from an ROI perspective,” says Abdelbarr. As brands pivot their strategies over the coming months, more opportunities for influencers will present themselves, she adds.

“Pitching original or experimental ideas for at-home campaigns or content can help influencers land dream brands in a moment of flux where they may be deviating from their tried-and-tested approaches.”

According to a study by Kantar, only 8 per cent of global consumers (out of 35,000 surveyed) want to see brands stop advertising, adds Mapstone.

“We’re all in this together and consumers are actively seeking out content – now isn’t the time for brands to shy away.”

Did you know that over half of the UAE population use digital wallets?