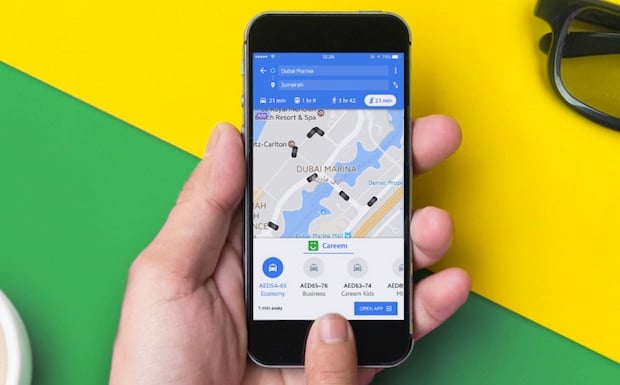 Dubai-based taxi sharing app Careem has integrated its services with Google Maps, it announced on Tuesday.

The service is currently available on Android and iOS to UAE users and will be rolled out across the other regional markets in the coming weeks, a statement said.

For users searching for directions in Google Maps, a tap on the Careem icon on the far right will reveal the closest available Careem cars, along with the expected pick-up time and fare estimate for a ride to their selected destination. Users will then have the option to open the Careem app and confirm their booking, with their pick-up and drop-off details transferring to the Careem app automatically.

The move will lead to a “faster ride-hailing experience” for users of both the apps, Careem said.

“As the go-to app for directions and navigation, Google Maps is an extremely popular service and integrating Careem within the app means users can now take advantage of the benefits of both the apps simultaneously,” said Wael Nafee, VP of Product at Careem.

Earlier this year, Dubai’s Roads and Transport Authority (RTA) confirmed that people in the city can book public taxis online via Careem.

The agreement marks the first time such a service is being provided by the private sector, the RTA said.

Careem, which recorded growth of 25-30 per cent per month in 2016, ended the year operating in 48 cities across Middle East, North Africa, Pakistan and Turkey, with more than six million customers and 150,000 drivers.