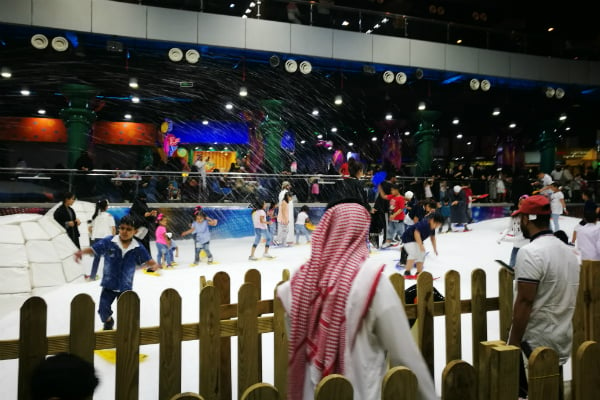 The temperatures outside may reach up to 38 degrees celsius but that has not stopped a snow park opening in the Saudi coastal city of Jeddah over the summer.

Snow Land, which will be open from June 15 to August 30, spans 300sqm and includes areas to build snowmen, have snowball fights, engage in sledding, a snowy slide ramp and even snow deep enough to wear snowshoes.

For the more adventurous there is the ‘large buoy jump ramp, featuring a springboard that propels users into an inflatable airbag.

The company said the snow is created by freezing pure water in machines with no chemical additives.

A similar attraction drew headlines when it opened in Riyadh’s Al Othaim Mall Rabwa in 2016.

EverSnow said the contact was its first in Saudi Arabia after conducting two events in Bahrain in 2015 and 2016 and it planned more projects in the kingdom and wider region.

The attractions has opened amid a wider entertainment drive by the kingdom to bring back billions of dollars spent by Saudis on tourism abroad.

Jeddah’s cooler climes are considered an escape from the capital Riyadh, where summer temperatures can reach 50 degrees celsius, but many Saudis prefer to spend their summers outside of the kingdom in Europe and elsewhere.

“Our snow animations provide important traffic to shopping malls and entertainment areas and we are looking forward to debuting a long term relationship in Jeddah with Fakieh Group with Sheikh Tarek A.Fakieh, a man of his word, who placed his trust in our company,” said EverSnow founder Bertrand Lambla.

“We are planning major developments in the GCC, especially in KSA and are very excited to announce new projects in the near future.”

Snow-themed attractions have proved popular in the Gulf, with several open in the United Arab Emirates including Ski Dubai at Dubai’s Mall of the Emirates and an Ice Rink at Dubai Mall.

A permanent indoor snow park is planned at the delayed Reem Mall project in Abu Dhabi, which is now scheduled to open in 2020.