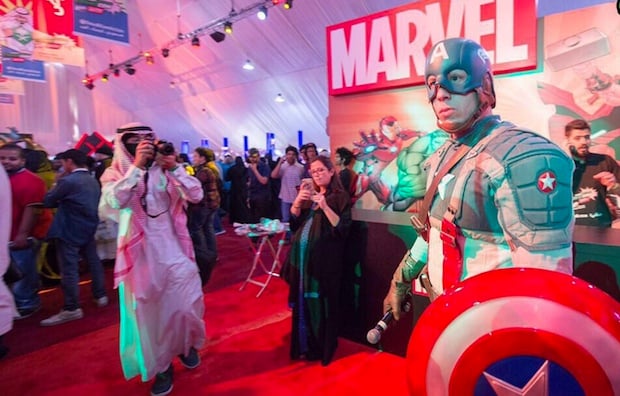 In a country where the use of magic is a crime punishable by beheading, it’s not every day that young Saudis wander down the street dressed as the Hulk or Doctor Doom.

But for three days over the weekend, some 20,000 Saudis decked out in costumes and face paint queued to get into Saudi Arabia’s first-ever Comic Con, where robots, video games and giant anime figures filled a tent in the Red Sea city of Jeddah.

The global comics expo was held under the auspices of the Saudi General Entertainment Authority, which has bucked some of the austere Islamic kingdom’s strict social codes to host a series of festivals, comedy shows and concerts this year.

Saudi Arabia is trying to boost its entertainment sector as part of an economic and social reform drive aimed at creating jobs and weaning the country off its dependence on oil.

“The level of entertainment has risen so much from previous years. There used to be no public places like this for families, there was no gender mixing, there was no entertainment, there were no shows,” said Modah Al-Bakheet, a Jeddah resident.

Comic Con started in 1970 when a group of about 100 science fiction fans in San Diego got together to swap comic books.

It has since grown into a globally recognised set of fantasy celebrations, drawing over 130,000 fans to events in London, Moscow, Delhi, Sydney and Dubai.

The Jeddah version still had some distinctly Saudi quirks: men and women queued in separate lines outside the venue, guarded by a heavy police presence, and the show ground to a halt each time the call to prayer was heard.

But inside the crowded tent, participants mingled around pop art booths and competed in video game competitions together, an unusual sight in a country that bars the mixing of men and women who are not related.

Objections by religious conservatives who likened the event to “devil worship” appeared to have had little effect.

For Obada Awad, whose Riyadh-based Time Entertainment organized Jeddah’s Comic Con, the green light from the government has opened up new business opportunities he once only dreamed of.

“It was better than expected. We prepared so many scenarios for every possible thing that could happen, but this was the best possible turnout,” he said, grinning.