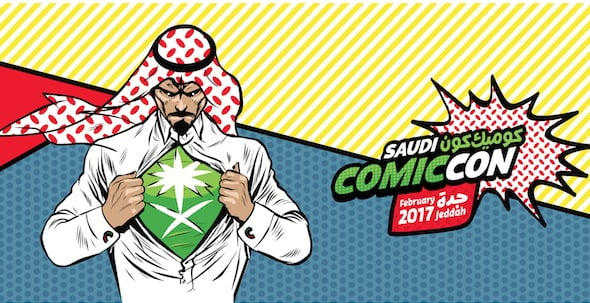 The Saudi’s coastal city of Jeddah is set to soon host the kingdom’s first ever Comic Con event.

Supported by Saudi’s General Entertainment Authority, the three-day event will take place from February 16-18 at Take Off RC Club in Jeddah.

However, certain basic rules have been laid out for the Cosplay (costume) competition.

Participants are expected to dress “decently” with boys not allowed to dress up as any feminine characters.

Girls must also leave the female zone wearing the abaya after removing all Cosplay-related items and accessories.

Visitors will also not be permitted to bring any sharp objects or weapons to the event.

The Cosplay competition must also be devoid of “inappropriate signs or symbols in violation of or affecting Islamic morals” with sound effects also avoiding “inappropriate connotations”.

We would like you to join our cosplay competition,
but first check out the rules!#Saudi_Comic_Con pic.twitter.com/eEw2N3uq9e

Amr AlMadani, CEO of the General Entertainment Authority, said: “This is an exciting development for our country – Comic Con events have a strong family appeal and we are delighted we can now add our own city of Jeddah to the list of host venues.

“Our aim is to provide people living in Saudi Arabia with memorable moments that they can experience with friends and family. We see from the high number of Saudi-based attendees at Comic Cons abroad in recent years that there is a strong demand to host these events in our own country.”

Comic Con is expected to attract 25,000 attendees from across Saudi Arabia, providing a boost to the local economy, the statement added.

Tickets are priced from SAR105 onwards.