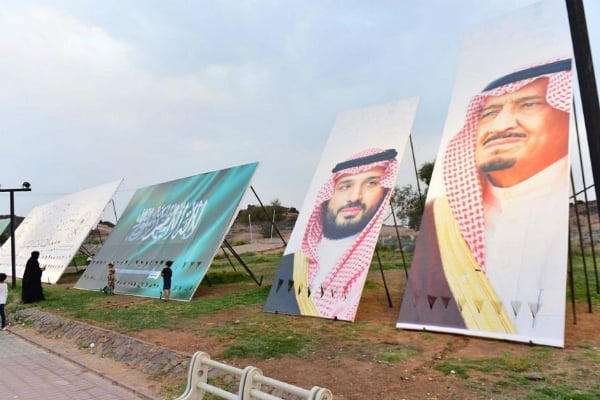 Trump issued the remarks during a rally in Mississippi last week.

“We protect Saudi Arabia. Would you say they’re rich. And I love the King, King Salman. But I said ‘king – we’re protecting you – you might not be there for two weeks without us – you have to pay for your military,” he said.

Read: Trump: I told Saudi king he wouldn’t last without US support

When asked about the matter, the crown prince told Bloomberg that the kingdom had existed for 30 more years than the United States, after being founded in 1744.

He added that it had also survived despite a lack of support from Trump’s predecessor Barack Obama.

“President Obama, in his eight years, he worked against many of our agenda – not in Saudi Arabia, but also in the Middle East. And even though the US worked against our agenda we were able to protect our interests,” he told the publication.

“And the end result is that we succeeded, and the United States of America under the leadership of President Obama failed, for example in Egypt.”

When pressed on the issue, Mohammed bin Salman added that “any friend will say good things and bad things” and suggested the kingdom considered it a misunderstanding.

He added that there was a difference between what Trump said and the country’s dispute with Canada over the kingdom’s treatment of activists.

The Gulf country froze trade ties, blocked grain imports, expelled the Canadian ambassador and ordered Saudi students studying in Canada to return home in August after Ottawa issued a tweet in Arabic calling for the release of individuals detained under a crackdown the kingdom claims is related to citizens acting as foreign agents.

Read: Saudi accuses Canada of treating it like a ‘banana republic’

“Trump is speaking to his own people inside the United States of America about an issue. And you’ve got the answer now from me.”

The heir to the throne went on to say Trump’s comments about Saudi Arabia not paying its way militarily were untrue, as it had spent billions of dollars on US arms.

However, despite the recent friction, he described his relationship with Trump in positive terms.

He also spoke of the kingdom’s ability to introduce new oil supply to the market as Trump has requested to drive down prices from their recent four-year high of more than $84 a barrel.

“We have spare capacity of 1.3 million without any investment,” he explained, adding that a deal with Kuwait to resume production in the Neutral Zone between the two countries would add extra capacity.

“So we believe that we are almost close to having something with Kuwait. There are only small issues that have been stuck there for the last 50 years.”

Reports have suggested the two countries hope to resume production by year-end but Bin Salman indicated there were still “sovereignty issues” that may need to be resolved before then.

Another topic of discussion was the kingdom’s halted plans to list state oil giant Saudi Aramco.

Mohammed bin Salman had led the 5 per cent listing, which he hoped would raise $100bn, until it was suddenly put on hold earlier this year in favour of a deal that would see Aramco acquire a majority stake in petrochemicals firm SABIC from his sovereign fund the Public Investment Fund (PIF).

Mohammed bin Salman said that deal would be completed “somewhere in mid-2019” and an Aramco IPO could follow a year after.

“So the deal in 2019, one financial year in 2020 and then immediately Aramco will be IPOed. We’ve tried to push to IPO it as soon as possible, but this is the timing, based on the situation that we have.”

More broadly, the crown prince also spoke of the Vision 2030 reform agenda he has led and changes to initial timelines to balance the budget and reduce Saudi unemployment, which rose to 12.9 per cent in the first quarter.

“I believe the unemployment rate will start to decline from 2019 until we reach 7 per cent in 2030 as targeted in the Vision,” he said.

He went on to describe “an amazing deal” the kingdom will announce at a PIF event later this month, but did not disclose further details.