Trump: I told Saudi king he wouldn't last without US support | UAE News 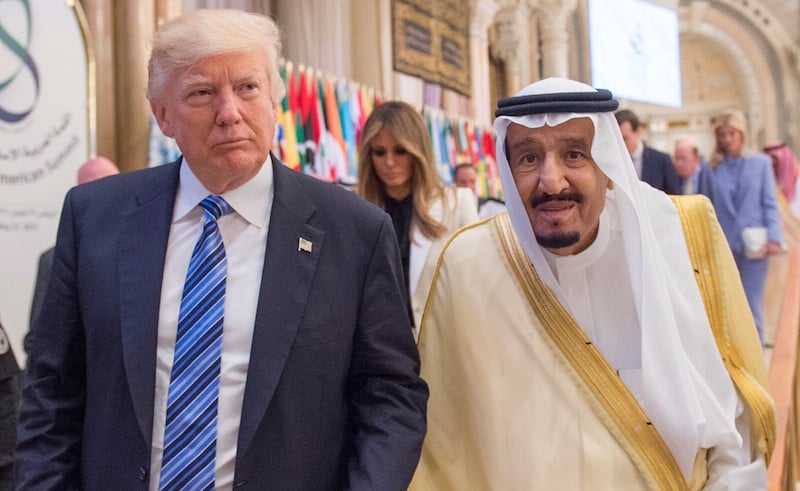 President Donald Trump made an undiplomatic remark about close ally Saudi Arabia on Tuesday, saying he warned Saudi Arabia’s King Salman he would not last in power “for two weeks” without the backing of the US military.

“We protect Saudi Arabia. Would you say they’re rich. And I love the King, King Salman. But I said ‘King – we’re protecting you – you might not be there for two weeks without us – you have to pay for your military,'” Trump said to cheers at a rally in Southaven, Mississippi.

Trump did not say when he made those remarks to the Saudi monarch.

Despite the harsh words, the Trump administration has had a close relationship with Saudi Arabia, which it views as a bulwark against Iran’s ambitions in the region.

Trump made Saudi Arabia his first stop on his maiden international trip as President last year.

Trump called King Salman on Saturday and they discussed efforts being made to maintain supplies to ensure oil market stability and global economic growth, according to Saudi state news agency SPA.

Saudi Arabia is the world’s top oil exporter and the de facto leader of OPEC, which has been criticised by Trump for high oil prices.

Speaking at the United Nations General Assembly in New York last month, Trump said OPEC members were “as usual ripping off the rest of the world.”

“We defend many of these nations for nothing, and then they take advantage of us by giving us high oil prices. Not good. We want them to stop raising prices, we want them to start lowering prices,” Trump said.

Also read: ‘We protect the Middle East countries, they would not be safe for very long without us’ – Trump

He has also pressed other U.S. allies, such as Japan, South Korea and Germany, to take more of the financial burden of their defense.