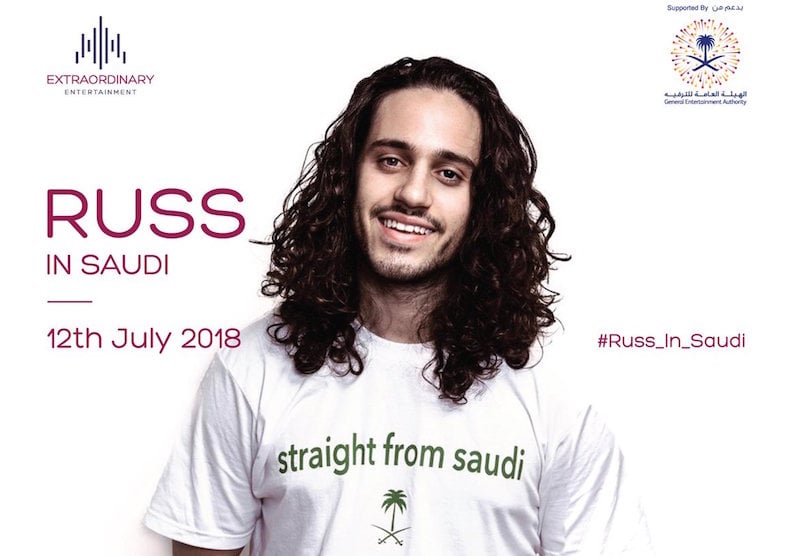 Saudi Arabia has cancelled a concert by American rapper and songwriter Russell Vitale, popularly known as Russ, that was scheduled for this week.

The concert was to be held at King Abdullah Economic City (KAEC) in Jeddah on Thursday, July 12.

The Saudi General Entertainment Authority (GEA) said that the event was cancelled because the organiser committed several violations and failed to meet the terms of the licence.

It said the organiser did not comply with the requirement of prior coordination with the Authority in terms of promotion campaigns and ticket sales.

The GEA also ordered the organiser to refund the value of tickets sold so far.

The concert was organised by events company Extraordinary Entertainment.

In a message on Twitter, Russ had confirmed about the show on June 27, adding that it had been in the making for three years.

Been workin on this show for 3 years…tickets on sale tomorrow 9pm Saudi time. All ages. Men & women. Love y’all! pic.twitter.com/cdr5aWjjSx

According to reports, tickets were sold out in just a few hours after going on sale.

However, the 25-year-old confirmed via Twitter on Saturday that the show was cancelled for reasons that he “didn’t know”.

The GEA was set up in May 2016 as part of Saudi’s efforts to diversify its economy under its ambitious Vision 2030 plan.

Several cultural events have been taking place throughout the country in a bid to capture up to a quarter of the $20bn currently spent overseas by Saudis.

In May, it was also announced that Saudi Arabia’s main sovereign wealth fund, Public Investment Fund (PIF), will set up a network of entertainment centres across the kingdom.

Abdullah al-Dawood, chairman of Development and Investment Entertainment Company (DIEC) – established in January by the PIF  – told Reuters his firm envisaged about 20 centres, each around 540,000 to 1.1 million sq feet, in 14 or 15 cities.

DIEC will invite private companies to invest alongside it on a commercial basis, Dawood said.