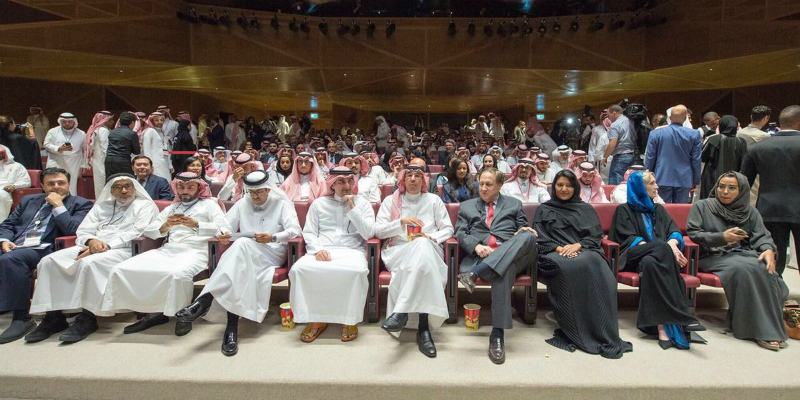 Saudi Arabia launched its first commercial movie theatre on Wednesday, ending a nearly 40-year ban on cinemas under a push by the crown prince to modernize the deeply conservative Muslim kingdom.

Tickets will go on sale on Thursday for the first public viewings on Friday, according to Adam Aron, chief executive of operator AMC Entertainment Holdings.

“Saudis now are going to be able to go to a beautiful theatre and watch movies the way they’re supposed to be watched: on a big screen,” he told Reuters ahead of the screening.

The smell of buttery popcorn filled the air as confetti rained down through the multi-storey atrium where Aron and Saudi Minister of Culture and Information Awwad al-Awwad announced the launch and proceeded into the 450-seat hall.

The opening marks another milestone for reforms spearheaded by Crown Prince Mohammed bin Salman to open the country culturally and diversify the economy of the world’s top oil exporter.

The prince, 32, has already eased restrictions in the last two years, including on public concerts, women driving and gender mixing. The kingdom held its first-ever fashion show last week with a women-only audience.

Many Saudis have rejoiced at the end of the cinema ban, sharing praise and pictures of Prince Mohammed on social media.

Others expressed confusion at what they consider a government flip-flop, with one tweeting on Wednesday: “Remember you will stand in front of God … and you will bear the sins of all those who watched the movies.”

Some religious conservatives view cinema and acting as inconsistent with Islam.

There has been little apparent resistance to the social reforms, which seemed unthinkable just a few years ago, though the space for criticism is also limited. Several prominent clerics were arrested last year in an apparent bid to silence dissent.

Among Wednesday’s movie-goers was Princess Reema bint Bandar, a second cousin of Prince Mohammed, who brought her 16-year-old son to experience what she called “an historical moment”.

The kingdom shuttered cinemas in the early 1980s under pressure from Islamists as Saudi society embraced a severe form of Islam.

Saudis have nonetheless been avid consumers of Western media and culture. Hollywood films and television series are widely watched at home and private film screenings have been largely tolerated for years.

In 2017, the government said it would lift the ban in part to retain money that Saudis currently spend on entertainment during trips to Dubai, Bahrain and elsewhere.

To serve a population of more than 32 million, most of whom are under the age of 30, the authorities plan to set up around 350 cinemas with over 2,500 screens by 2030, which they hope will attract nearly $1 billion in annual ticket sales.

A source told Reuters last month that theatres would not be segregated by gender like most other public places in Saudi Arabia.

Awwad, the culture minister, told Reuters on Wednesday that they would be similar to cinemas around the world. Initial screenings are likely to be for families, with occasional ones for bachelors.

The extent of censorship was not clear but a Saudi official said the same versions of films shown in Dubai or Kuwait will be suitable for Saudi Arabia. Two scenes of kissing appeared to have been cut from the “Black Panther” screening.

“For those that would like to come and enjoy watching the movie at the movie theatre, they are more than welcome,” he said. “And for those who don’t want to watch movies at all, it’s also their personal choice.”