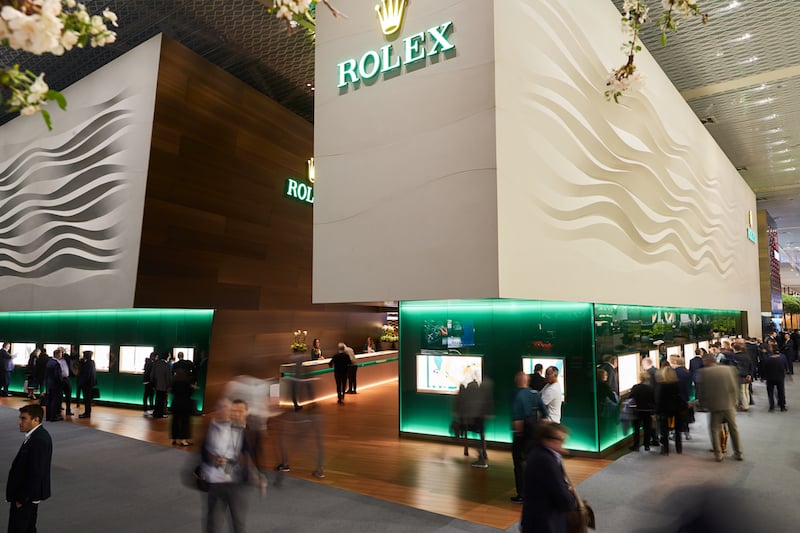 A few the world’s biggest luxury watch brands including Rolex, Tudor, Patek Philippe, Chanel and Chopard have confirmed that they have decided to withdraw from the annual Baselworld watch exhibition and set up their own watch show in association with the Fondation de la Haute Horlogerie.

The new show will be held in April 2021 at the Palexpo in Geneva, and will be linked to Watches & Wonders trade fair organised by the FHH.

The 2020 edition of Baselworld and Watches & Wonders which were scheduled to be held this month were cancelled as a result of the global Covid-19 pandemic.

Individual brands had also decided to postpone the launch of their novelties as a result of the virus.

In an exclusive statement to Gulf Business, Patek Philippe said: “Due to the deteriorating global Covid-19 situation, please be informed that Patek Philippe will not launch the new models in April this year as initially planned.”

The decision of these top tier brands to leave Baselworld – until now the world’s biggest watch fair – “follows a number of unilateral decisions made without consultation by Baselworld management, including the postponement of the watch show until January 2021, as well as its inability to meet the brands’ needs and statements,” said a particularly stark joint press statement from the five brands and the FHH, distributed by Rolex.

Trouble for Baselworld began in 2018 when the Swatch Group announced that it was pulling out of the fair along with its entire portfolio of brands including Omega, Breguet, Blancpain and Jaquet Droz.

Swatch Group subsequently set up its own watch fair for trade media and retailers called Time To Move.

Breitling which had a major presence at the fair also announced last April that it too was pulling out of Baselworld and favoured smaller regional shows across the world where it would debut its novelties.

The other brands that confirmed that they had pulled out of Baselworld included Hermès, Ulysse Nardin, Girard-Perregaux, Grand Seiko and Gucci, among others.

More recently, in February, Bvlgari confirmed that it too would no longer be participating in Baselworld. That came a month after key brands from the LVMH stable including Bvlgari, Zenith, Hublot and Tag Heuer held their own watch week in Dubai in January.

With heavy-hitters like Rolex, Patek Philippe, Chanel and Chopard now exiting Baselworld, the very future of that trade show which dates back to 1917, is now called into question.

The CEOs of a few brands have explained their decision to withdraw from Baselworld.

Jean-Frédéric Dufour, CEO of Rolex SA and board member of Montres Tudor:
“We have taken part in Baselworld since 1939. Unfortunately, given the way the event has evolved and the recent decisions made by MCH Group, and in spite of the great attachment we had to this watch show, we have decided to withdraw. Following discussions initiated by Rolex, it seemed only natural to create a new event with partners that share our vision and our endless, unwavering support for the Swiss watchmaking sector. This will allow us to present our new watches in line with our needs and expectations, to join forces and better defend the interests of the industry.”

Thierry Stern, president of Patek Philippe:
“The decision to leave Baselworld was not an easy one to take for me, being the fourth generation of the Stern family to participate to this traditional yearly event. But life evolves constantly, things change and people change as well, whether it is at the level of those responsible for the watch fair organization, the brands or the clients. We constantly have to adapt ourselves, question what we do, since what was right yesterday may not necessarily be valid today! Today Patek Philippe is not in line with Baselworld’s vision anymore, there have been too many discussions and unsolved problems, trust is no longer present. We need to answer the legitimate needs of our retailers, the clients and the press from around the world. They have to be able to discover the new models from Swiss watchmakers each year, at one time, in one place, and this in the most professional manner possible. That is why, following several discussions with Rolex and in agreement with other participating brands, we have decided to create, all together, a unique event in Geneva, representative of our savoir-faire.”

Frédéric Grangié, president of Chanel Watches & Fine Jewellery:
“Like its partners, Chanel shares the same independence and the same desire to protect and promote the values, know-how, utmost quality and precision of Swiss watchmaking. This initiative marks a key milestone in the history of Chanel Watchmaking and is part of a long-term strategy, which began with the launch of this activity in 1987. This exhibition will allow us to present all of our new creations in an environment that meets our high-quality standards.”

Karl-Friedrich Scheufele, co-president Chopard:
“Chopard first exhibited at the Basel fair in 1964 with a stand of some 25 square metres. After careful consideration, our family decided to support the Rolex initiative and retire from Baselworld – a painful decision. The creation of this new watch show in Geneva, in parallel to Watches & Wonders, will allow us to better serve our watchmaking partners and our customers. Through the alliance, these grandes maisons will also be able to collaborate in promoting the values and best interests of Swiss watchmaking.”

Jérôme Lambert, CEO of the Richemont Group, said on behalf of the FHH council:
“The Fondation de la Haute Horlogerie is delighted to welcome a new salon which will strengthen the historical Watches & Wonders event in Geneva next year in early April.”