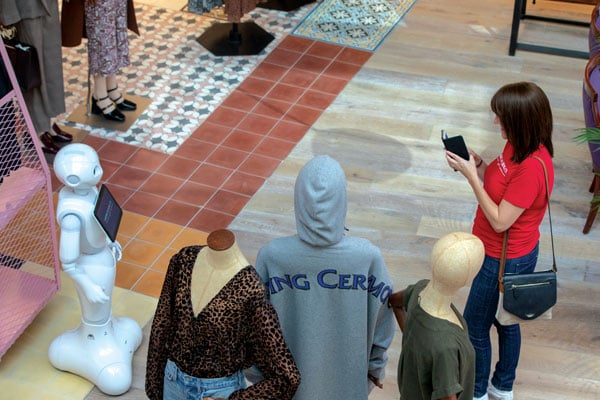 “Brick-and-mortar globally still takes 80 per cent of sales versus digital.” That statement alone by Greig Fowler, the CEO of Dubai-headquartered AW Rostamani Lifestyle (AWRL), is enough to rekindle your faith in the physical retail model. It also allows you, within reason, to wave a finger at the handful of scaremongers who proclaimed that e-commerce had dealt it a deathblow.

Fowler though is quick to add: “Conditions are challenging, but the time now is for retailers to review their service proposition in-store and integrate digital as part and parcel of that experience.”

That overarching assertion can be best exemplified in the new American Rag Cie store that Rostamani’s lifestyle division recently opened in Dubai Mall. The store isn’t merely peddling So Cal streetwear, but is a retail space that has embraced the concept of ‘experiential shopping’. That’s why you’ll find a World Coffee Bar with a monthly rotating menu of single-origin coffees and when it’s time to actually shop, you’ll be attended to by robot-assistants, which are equipped with facial recognition technology.

If you’re a return customer, it will remember your last purchase and suggest new merchandise based on that stored information. “Our in-house robots in American Rag speak English, Mandarin and Cantonese, with Arabic and Russian being added in spring.”

Machine learning and artificial intelligence are being integrated into the retail model at American Rag, which allows it to track availability of apparel in real-time worldwide and to source and stock apparel favoured by customers in specific regions across the world. American Rag is an example of physical retail and digital technology working together and not competing against each other.

The AWRL division was founded by the parent company AW Rostamani in 2012 as the arm of the group that licenses, distributes, retails, designs and produces for a whole host of fashion, homeware and jewellery brands. Fowler was brought on board to lead the business last year and also plays a key role in determining what brands the group works with. It currently operates seven brands: Angels, Graffiti, Georg Jensen, Vhernier, Apartment 51, American Rag Cie, Sik Silk and Tom & Teddy.

“Whether it be the storytelling of the history of Georg Jensen, the workmanship and craft of the Vhernier workshops in Valenza or the technological and historically disruptive interactive experience in our American Rag store, the theme remains consisten,” says Fowler.

Georg Jensen and Vhernier are the two brands that Rostamani have been longest associated with from among its current portfolio. Others like Apartment 51 was created and inspired by the shareholders Huda and Hana Rostamani and their partner Roberta Clarese after their global travels highlighted a gap in the market for beautifully made furniture, homeware and objects, while kids luxury clothing label Angels was bought from the Rivoli group in 2016. The current bigwig in the portfolio though, American Rag, was a brand that Fowler was personally involved in bringing into the fold.

Fowler first came into contact with the brand shortly before he joined Rostamani when he was still a consultant at a Hong Kong firm and involved in the restructure of American Rag’s business model in Japan. Owner Mark Werts was seemingly impressed and when Fowler mentioned he was taking up the job in Dubai, Werts offered to collaborate with AWRL to bring their concept to the Middle East.

“I naturally shared this with the shareholders upon joining [AWRL] and we moved from there,” he says. “The store in LA is iconic in the US fashion landscape and is ranked in the top 10 must-visit stores every year.”

Apart from expanding its portfolio and focusing on integrations of digital and retail platforms, another focus area for AWRL is on ensuring that its payment gateways entice Chinese shoppers in Dubai – a vital subset – who along with the Russians are now visiting the emirate in droves and arrive with a particularly high disposable income. “We continue our strong relationship with Union Pay and are implanting Alipay and Apple Pay across all our payment platforms in-store and online,” say Fowler.

“We are strengthening our relations with the tour operators to bring customers to the stores and have invested in Chinese speaking staff in all our stores to ensure clear communication in their mother tongue.”

He adds that apart from the in-house robots being able to speak Mandarin, the commercial websites will also be available in four languages by summer next year.

Fowler cautions that global economic factors could hamper with the expansion of the retail sector. “Oil as a commodity is unstable as standard and the general economic curve follows cycles as it does everywhere else,” he explains.

“I believe we are nearing the end of this cycle, but the oversupply of both commercial and living real estate cannot help stabilise the position, the population cannot support its growth rate without a change in strategy.”

A year into his job, Fowler has accelerated AWRL’s business with the introduction of American Rag into the mix. But there’s much more that he wants to get done in a hurry.

“2019 is all about distribution and digital growth for us, with a few strategic targeted openings in the UAE and the plans are in place to move into Kuwait and KSA directly in 2020 with American Rag, Angels, Vhernier and Apartment 51.”