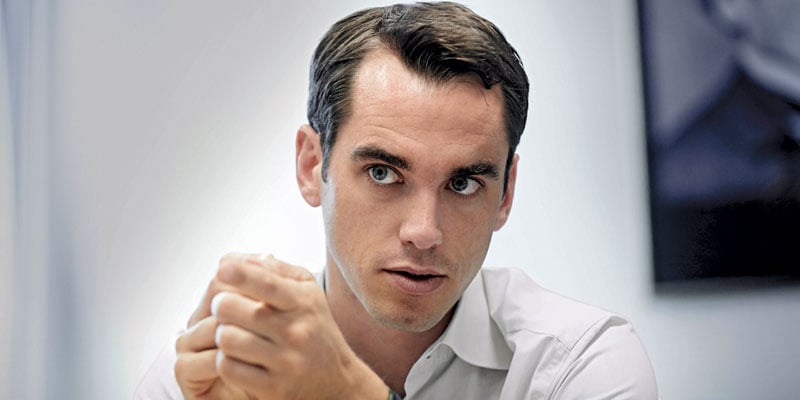 Don’t preach to Edouard Meylan about status quo. Even worse, don’t ask him to bend his principles.

In January 2015, hours after the Swiss National Bank removed the 1.20 limit peg of the Swiss franc to the euro – a move that could spell disaster for small businesses like his – Edouard as CEO of H. Moser & Cie drafted a fiery open letter to the president of the national bank threatening to take his company two kilometres across the border from Schaffhausen in Switzerland into Germany. He didn’t go through with it, but that letter went a long way into shaping Edouard’s image as a no-nonsense CEO unafraid to dissent.

Another example can be found in 2016 when at the height of a frenzy where the Swiss watch players were obsessing over the implications of the arrival of the Apple Watch, Moser quietly went about launching the Swiss Alp Watch whose silhouette resembled that of the Apple timepiece, but instead featured a fully mechanical movement inside. Positioned as the Swiss watch industry’s reply to Apple, the watch received a rapturous reception from mainstream media like The Wall Street Journal and CNN, far beyond traditional niche watchmaking publications, making Moser a more familiar name even among non-watch enthusiasts too. (One estimate suggested that the digital visibility of that product potentially generated hundreds of millions views.)

The following year, Moser decided to stop using the ‘Swiss Made’ label on its watches after regulators in the country introduced new laws requiring 60 per cent of the value of a watch to be generated in Switzerland (up from 50 per cent) for it to be called Swiss Made.

Edouard’s response? Moser launched what it referred to as “the most Swiss watch ever created” – a 42mm unique timepiece called the Swiss Mad Watch that housed an HMC327 mechanical calibre and whose case was made entirely of cheese.

“You see a lot of CEOs who don’t want to change traditions, question traditions or challenge history. My father was quite outspoken and always ready to do that. What I do is probably indirectly inspired by my father,” says Edouard, referring to his father Georges-Henri Meylan, the former CEO of Audemars Piguet who went on to establish a company called MELB Holding that acquired Moser in 2012.

What some might refer to as grandstanding, self-aggrandizing, or provocative moves are measures Edouard regards as almost necessary – calling out a lack of imagination and creativity wherever he sees it. But he knows his limits. Shortly before the start of SIHH in 2018, Moser unveiled a Swiss Icons Watch whose design riffed off much larger watchmaking houses. But before the watch could be launched at the SIHH, it was withdrawn. “It’s an industry with some very big players who have a lot of power, and some of them got upset. We didn’t explain what we wanted to very well. We were criticizing brands that just copy and don’t bring creativity into this industry – and we were praising those who did. But some who we were praising actually got upset. I still believe the message behind that watch was extremely important,” says Edouard.

Moser & Cie is a small-scale family business. They have 60 employees in their manufacture in Schaffhausen and produce 1,500 watches a year. There are six core lines. The Endeavour is its largest collection and includes perpetual calendars and perpetual moonphase timepieces, while the Venturer is a more classical take on the Endeavour and includes timepieces like Moser’s iconic big date. The Pioneer is the sporty collection and the Heritage collection meanwhile has timepieces inspired by the Moser museum located in Schaffhausen too. The fifth collection, the Swiss Alp Watch, will be discontinued soon.

“There’s going to be one more edition of the Swiss Alp Watch and then we’re going to stop. We had 400-500 of these movements when we acquired Moser. I like the idea of having something that lived for four years and then disappeared because I think the value of that product will remain much stronger.”

Last month, Moser unveiled a new timepiece called the Moser Streamliner Flyback Chronograph Automatic, and with it opened up an entirely new collection for the brand, its sixth collection. It is the brand’s first steel sports watch and it is also Moser’s first automatic chronograph.

Edouard adds that he aims to increase production to 3,000 watches over the next three-five years. “We are pretty much 100 per cent integrated on the movement side – we develop, construct and produce all the parts of the movement including the hairspring and balance wheel.”

The hairspring is the single most important component of a mechanical timepiece, and along with a balance wheel it makes up the regulating organ of a mechanical watch. There are only a handful of players in Switzerland who have the expertise to make a hairspring – its thickness is around one-seventh the width of an eyelash and it involves a highly-skilled process to create one. “It’s a big investment,” says Edouard referring to the cost of manufacturing the hairsprings, “and we don’t make money with the hairsprings. But it’s so strategic for this industry, that we want to continue to develop it. We even supply it to other brands.

“At the Dubai Watch Week [2019], we brought one of our master watchmakers who taught people how to make these hairsprings and how to curve them.” Asked if he was afraid of letting in on trade secrets, he quickly added, “Independent watchmaking is all about open source. We are working with brands like MB&F on common projects in terms of distribution and products. It’s rare for big brands to align interests and work together, but I think that independent watchmaking at its roots is about collaboration and working together to find solutions to survive.”

“Now Moser is a brand that has exploded in the region and I think one big element is the Dubai Watch Week, where by meeting people, being here myself along with my brother, explaining what we do, and engaging with people is what has made the difference for independent brands like ours.”

The success of Moser is also down to the relationship that the Meylan family has cultivated with regional retailers, especially the Seddiqi family in Dubai.

“The relationship with the Seddiqi family goes back to my father and the previous generation [of the Seddiqi family] – the chairman and vice-chairman. They were very close with AP [Audemars Piguet] and that’s how we got to know them well. When we took over Moser, it was quite natural for us to come and see them and discuss the brand with them. Seven years ago, Moser was not successful and they gave us a chance and the time to do something with the brand.

“I have a very good relationship with Mohammed, somebody who has passion and understanding of the products. In many cases when we do something, we submit it to him, discuss it and get his feedback. A few years ago when we did the first special edition timepiece for Moser – a watch with no logo – having a retailer bold enough to do something like that specifically for this market, was an endorsement of the Moser personality.”

Moser currently has 80 points of sale globally, and Edouard says that he plans to open the first boutique in 2020 with possible destinations being the UAE, China and Japan. “Dubai could be the location for one of our first boutiques. We are also in advanced discussions in Tokyo, Beijing and Shanghai.”

The business is very much a family business. Edouard’s brother – who is based in Dubai – leads distribution for markets including Dubai and Hong Kong. Edouard says that eventually, when it’s time to quit, he would like the next generation that will be in charge of the brand to come from within the family too – either his or his brother’s children.

For now though, Edouard is championing the cause of independent watchmaking. While most of the movement operations have been internalized, Moser is now focusing on integrating the dial and case manufacturing business and simultaneously focusing on technical and material innovations. An example of those innovations can be found in Moser’s Vantablack dials found on a few of their timepieces. Vantablack is a proprietary material that uses carbon nanotubes to absorb light, and is a colour that has been described as ‘the blackest black.’ And with the new steel integrated bracelet collection, Moser is ready to tap a demographic that it hadn’t spoken to until now. “Some kids may buy connected watches because at first they want to be part of a group. But eventually they want to emancipate. I think that part of this emancipation is to have something special, which is why mechanical watches will remain.”  And by virtue of his conduct within the industry, Edouard can speak authoritatively on the subject of emancipation.

Shifting gears with the Porsche 718 Boxster