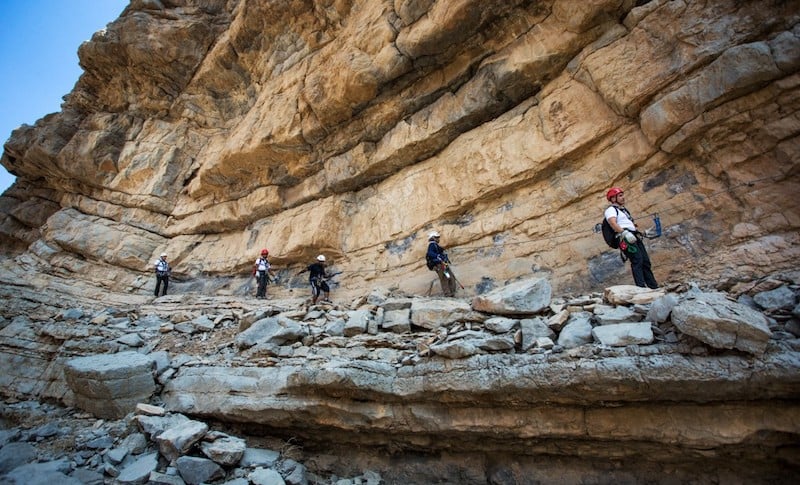 Ras Al Khaimah will reopen its Jebel Jais Via Ferrata (Iron Path) attraction on November 1, it was announced on Wednesday.

The 470 metre-long Jebel Jais Via Ferrata allows visitors to climb and trek almost 400 feet above sea level on Jebel Jais, the country’s highest peak at 1,934 metres.

Tourist groups are able can choose from three routes in twice-daily supervised tours starting at 9.00am and 1.00pm.

It was launched in November last year and was operational for six months.

Individual and group tickets for the Jebel Jais Via Ferrata, priced at Dhs400 each, can now be booked through the website. Complimentary bus transfers are available for ticket-holders from Tulip Inn Ras Al Khaimah to Jebel Jais.

Haitham Mattar, CEO, RAKTDA said: “We extended the product’s launch period by a month earlier this year due to heavy demand. With the second season beginning in November, and expected to run through to April next year, we anticipate heavy pick up for the product as word spreads locally, regional and internationally of the quality of the experience.”

Zip line operator Toro Verde has been appointed to operate the return of the Jebel Jais Via Ferrata.

“The inaugural year welcomed some 1,500 intrepid adventurers who took up the challenge, with an average of 300 per month,” Jorge Jorge, CEO of Toro Verde Ras Al Khaimah, said.

“We have already witnessed significant interest in its return, and with the booking site launching this week, we expect to welcome a greater number of adventure travellers to Jebel Jais through to 2018.”

The Jebel Jais Via Ferrata is the first in a series of mountain, activity and adventure products RAKTDA is developing specifically for nature and adventure seekers.

“We are nearing the launch of the world’s longest zip line, which will be another showpiece product to leverage Ras Al Khaimah’s spectacular mountain terrain and attract thrill seekers from around the world,” added Mattar.

The attraction is part of the Ras Al Khaimah Tourism Development Authority (RAKTDA)’s strategy to develop the emirate’s adventure sports offerings and attract one million visitors by the end of 2018.

Ras Al Khaimah is currently working on its Vision 2019 Destination Tourism strategy, which will see the development of hospitality concepts at the emirate’s coastline, mountain ranges, hot springs and desert.

All are aimed at attracting one million visitors to the emirate by 2018.