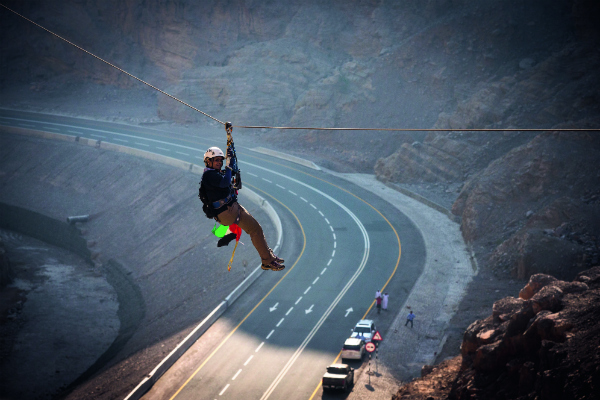 If you mentioned the name Ras Al Khaimah (RAK) in many parts of the world five years ago, few would know to where you were referring.

The UAE’s northern emirate has walked a far more modest path when it has come to drawing attention to itself than its siblings to the south – Dubai and Abu Dhabi – and as such has remained relatively unknown outside the Gulf region.

However, fast forward to 2017 and times are changing, particularly as reduced economic sentiment and austerity measures hit travel in other parts of the region.

First quarter data from STR shows average hotel revenue per available room (RevPAR) in RAK up 2.5 per cent year-on-year in comparison to declines of 4 and 8 per cent respectively in neighbouring Dubai and Abu Dhabi.

Similarly the emirate’s average occupancy increased 6.2 per cent to 75.5 per cent in Q1 in contrast to a 1.4 per cent dip across the Middle East to 70.5 per cent.

“There has been a very good spill over of this fantastic growth in performance from last year,” says Ras Al Khaimah Tourism Development Authority (RAKTDA) CEO Haitham Mattar.

RAKTDA, which was established in 2011 with the aim of attracting one million tourists to the emirate by the end of 2018, has been spearheading efforts to boost Ras Al Khaimah’s standing on a global level.

Over the past two years the organisation has established representative offices in key markets such as the UK, India, Saudi Arabia, Russia and Germany to drive awareness of the destination.

These efforts went into overdrive in 2016 with RAKTDA upping its marketing spend by 85 per cent to boost partnerships with key tourism agencies and airlines and increase its attendance at trade shows.

And in the short term at least they appear to have paid off. RAK saw an 11.3 per cent increase in international arrivals for the first three months of this year in comparison to 2016, while overall visitors were up 8.3 per cent.

In the context of the wider GCC the emirate was also second behind only Dubai in terms of RevPAR and average daily rate levels in the first quarter and third in terms of occupancy, according to STR data.

“If you look at RAK it’s one of the first resort markets where it’s positioned at that much lower price point and it’s getting good strong demand as a result,” says Robin Rossmann, managing director of STR.

“The region needs to be able to continue to appeal to luxury high end tourism but to hit target numbers they’ll need to get a wider range of people travelling in.”

With this in mind, RAK is looking to balance its reliance on the traditional domestic market with international arrivals to diversify its revenue sources and increase its average length of stay from the 3.9 days seen in Q1.

Key to this, argues Mattar, is highlighting the different terrain and experiences offered in RAK in comparison to the neighbouring emirates, particularly given that around 90 per cent of international visitors still come via Dubai International.

To do so the emirate is carving its own niche as a destination for nature and adventure tourism and investing in a growing number of experiences to highlight its combination of mountainous terrain, sandy beaches and terracotta sand dunes.

Among the most prominent efforts in recent months has been the Jebel Jais Via Ferrata (Iron Path) adventure challenge in the Hajar Mountains. Since opening in December the three climbing, trekking and zip line paths, which are up to 400m above sea level, have been used by 1,500 enthusiasts.

“This was basically a test-the-water thing for us to see the appetite for tourists on this type of product,” says Mattar.

“In terms of demand Jais Via Ferrata is booked every weekend and runs about 85 per cent full on week days. So a clear and obvious decision was we need to expand this for us to take on more people.”

Under the plans, the adventure challenge’s inaugural season was extended until the end of May and work is now underway to expand capacity from 60 people a day to 200 in time for the next season in October. This in turn will allow it to hold larger teambuilding groups from international firms like IBM and GE, says Mattar.

RAKTDA also plans to add to the three zip lines with a world record worthy of neighbouring Dubai. A new line, set to open near the Oman border in Q4, is planned to be longer than the current 2.5km world record holder in Puerto Rico as part of additions to the area including new mountain and hiking routes and a viewing deck that will host events 1,300m above sea level.

“It will overlook the sea of RAK and the port of RAK with some of the most stunning views of the sunset in the country. And in temperatures that are 10 degrees lower than the coast with a lot less humidity,” the CEO says.

Outside of these plans, the authority is also planning to capitalise on the so called ‘glamping’ trend with a luxury camp designed to serve as a base for visitors to experience nature and embark on hiking, mountain biking and adventure excursions. This will include proper bedding including bunk beds, family tents, a community centre, fire pits and evening barbecues.

The camp and a host of other hospitality projects will see Ras Al Khaimah’s hotel offering expand significantly in the coming years.

RAKTDA believes around 4,445 new rooms will open in the emirate by 2020, ranging from three- to five-star properties, with a significant number located at the $1.8bn Al Marjan Island development, which comprises a cluster of coral-shaped man-made islands.

While further along the coast, RAK Properties is returning to work at its Mina Al Arab Island development with hotels from Anantara and InterContinental to open in 2018 and 2019 respectively.

Despite the significant additional capacity on the horizon, Mattar insists RAKTDA is undertaking sufficient effort to increase demand and he sees further opportunities for both luxury mountain resorts and wellness retreats in the coming years.

While he is also keen to emphasise that RAK’s efforts can complement the activities of other emirates.

“We see more and more uptake of people taking packages to go to Dubai for a city break and then the rest of the emirates including RAK for nature based adventure activities,” he says.

Through these efforts it may not be too long before Ras Al Khaimah becomes as famed a destination as its regional peers.

Dubai to emerge as a ‘theme park destination’ similar to Orlando