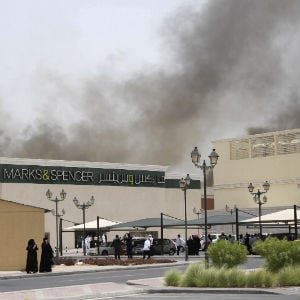 Fires broke out at an aviation college and a girls’ school in Qatar on Tuesday, a day after 19 foreigners died in a shopping mall blaze, focusing concern on safety standards in the Gulf state.

The country of 1.7 million people, most of them expatriates, has outlined public investment plans worth $95 billion over five years to 2016 as it prepares to host the 2022 soccer World Cup. This week it unveiled budgetary spending of $49 billion for the next fiscal year ending March 2013.

Thirteen expatriate children were among those killed in Monday’s fire at the Villagio Mall in Doha’s west end, including two-year-old triplets from New Zealand.

Officials said on Tuesday that a small fire broke out in the Qatar Aeronautical College while messages on social media said another was doused at the Fatima Bint Al-Mogeera school in Doha.

“There was a fire, but a very small one. It has been put out,” a representative of the aviation college told Reuters, adding that the fire was believed to have been caused by an electrical fault. College Director General Ali al-Maliki said no one was hurt in the ground floor blaze.

The fires raised questions about safety standards in Qatar, the world’s largest exporter of liquefied natural gas and one of the richest countries in the world.

“The fire … is one of the worst tragedies to strike Qatar in living memory and drives home the fact that safety needs to take precedence over everything else when it comes to the country’s ambitious future plans,” an editorial in the Qatari English-language daily Gulf Times said on Tuesday.

The mall blaze erupted on Monday morning at Villagio Mall’s Gympanzee nursery on the first floor in a hallway accessible only via a small passage with no emergency fire exit.

Dense smoke and extreme heat created a “death trap” in the corridor as the staircase collapsed, the interior ministry said, making it impossible for rescuers to directly enter the nursery and forcing an evacuation attempt from the building’s roof.

“Lillie, Jackson and Willsher came into this world together and were inseparable as siblings, best friends and the joy of our life,” the triplets’ Weekes family said in a statement emailed to Reuters.

“Tragically they left together after only two short years.”

An investigation has been launched into the blaze amid reports that security staff at the complex reacted slowly and in chaotic fashion. Several people at the complex told Reuters fire alarms did not go off or rang only faintly.
“That’s the tragedy: no PA (public announcement) system, no sprinklers. It’s a failure. A complete failure,” said one civil engineer, requesting to remain anonymous as he works with the Qatari government.

Findings from the investigation are expected within a week, and Qatari authorities said late on Monday that a committee would be formed to monitor building safety standards.