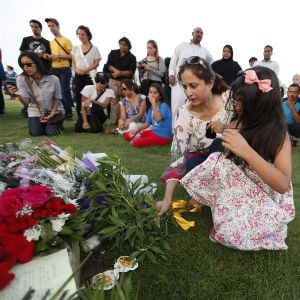 Qatar has ordered the arrest of five people in connection with the shopping mall blaze that killed 19 people, including 13 children in Doha on Monday.

Qatar’s Attorney General, Ali bin Fetais Al-Merri, ordered the detaining of the Villagio Shopping Mall’s owner, its director, the deputy director, the assistant director of Security, and the owner of the Gympanzee nursery where the fire broke out, Qatar News Agency reported.

“The Attorney General also ordered the calling and bringing of the Villagio Security director as well as the official who is in charge of issuing licences at the concerned ministry,” it said.
On Tuesday, relatives, friends and several mourners bade farewell to the victims of the incident in an emotional ceremony.

Among those killed were two-year-old triplets from New Zealand, three Spanish siblings, four teachers, and two firefighters, who died while trying to evacuate the nursery.

While the cause of the fire is as yet unknown, the interior ministry said that thick smoke, extreme heat and malfunctioning sprinkler systems created a “death trap”, hindering rescuers from directly entering the nursery.

Qatar has ordered a commission to investigate the incident, which has led to questions about safety standards in the country.