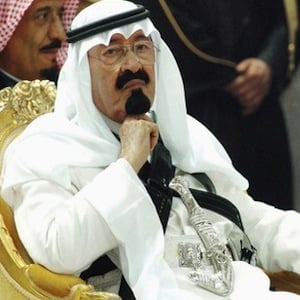 Regional heavyweight Saudi Arabia, which sits on a fifth of global crude reserves, is the world’s top oil exporter, a significant owner of dollar assets and acts as Middle East lynchpin of US security policy. It is home to the biggest Arab stock market.

Changes in the royal line last year have raised questions about the direction and pace of gradual economic and social reforms aimed at reconciling the kingdom’s conservative Islamic traditions with the needs of a youthful, increasingly outward looking population.

As it tackles change, it is also facing tension with regional rival Iran and turmoil in two neighbouring countries hit by the wave of Arab unrest in early 2011.

The death of Crown Prince Sultan last October led to conservative Interior Minister Prince Nayef’s promotion to King Abdullah’s heir, only a week after the octogenarian monarch had his third back operation within a year.

King Abdullah has aimed to create jobs for young Saudis by liberalising the economy and introducing regulations restricting foreign workers. He has attempted to diminish the spectre of Islamic militancy by reducing clerical control over education.

Some 60 percent of Saudis are under the age of 30, Internet penetration is 44 percent according to internetworldstats.com and unemployment last year reached 10 percent.

Youth unemployment was seen as one of the causes of protests in other Arab countries in early 2011, but a ban on protests backed by leading clerics, a show of support by tribal leaders and plans to spend some $110 billion on housing and other social benefits helped the kingdom ward off any serious unrest.

Demonstrations were limited to the Shi’ite Muslim minority in the oil producing Eastern Province, where anger at perceived discrimination and activist arrests fuelled minor protests throughout the summer. Protests were reignited this month, resulting in the killing of at least two protesters.

In November, four young men were shot dead during clashes between security forces manning checkpoints and Shi’ite protesters, including some who were lightly armed, and another young man was shot dead in similar circumstances in January.

Riyadh suspects Iran of fomenting unrest among its Shi’ite community and in neighbouring Bahrain, where followers of the sect are a majority, and attempting to expand its influence throughout the Arab world.

A major concern is that Iran might try to block the Strait of Hormuz, which is the main route for Saudi Arabia and other Gulf states to ship crude oil to the outside world.

It also points to a U.S. accusation in October that two Iranians plotted to assassinate the Saudi ambassador in Washington with support from Tehran, raising fears of escalating tensions between the Gulf’s largest powers.

Iran denied any part in the alleged assassination plot or attempts to interfere in Bahrain and Saudi Arabia.

Although the kingdom suppressed an al Qaeda campaign last decade, many of the organisation’s members slipped into neighbouring Yemen.

Riyadh fears their ability to operate freely in the turbulent tribal country may be enhanced by the violence between forces loyal to President Ali Abdullah Saleh, who has agreed to step down, and a variety of opposition groups. Much of the country has slipped out of central government control.

The appointment of Prince Nayef, who is about 78, as crown prince involved the Allegiance Council, a body made up of princes set up by King Abdullah in 2006 to regulate the kingdom’s opaque succession process.

Analysts said Abdullah’s decision to involve the council for the first time improved the chances of orderly, smooth power transitions in the future.

However, one of its members, Prince Talal bin Abdulaziz, resigned from the body in November raising concerns of disagreement within the top echelons of the royal family over future leadership.

Crown Prince Sultan had been defence and aviation minister for around five decades and after his death in October the department was split in two.

Former Riyadh Governor Prince Salman, 76, was appointed as the new defence minister, solidifying a belief he is now next in line to rule after his elder brothers Abdullah and Nayef.

So far, Saudi Arabia’s kings have only been drawn from the sons of its founder, King Abdulaziz Ibn Saud, who died in 1953.

Around 20 of his sons are still alive and a handful of these occupy senior government posts and may want to press a claim one day to rule the country.

Analysts say the question of succession is likely to become more complicated when the kingship eventually moves down a generation to one of Ibn Saud’s grandsons, a development that might not happen for a decade or more.

– The health of senior royal family members and their involvement in day-to-day affairs of running the kingdom.

– A reshuffle of top government positions between leading members of the ruling family.

– Any sign of abrupt cancellation of scheduled programmes such as foreign visits by Saudi dignitaries; sudden trips by Saudi princes to visit an ailing fellow prince abroad.

– Any signs that the elder generation is passing on more responsibility to the grandsons of Ibn Saud.

Officials who back King Abdullah say they fear that young Saudis frustrated over their failure to find work could provide potential recruits to violent Islamists who want to overthrow the House of Saud.

King Abdullah launched some reforms to overhaul education and the judiciary after taking office in 2005 but analysts say his drive has run out of steam.

Economic reform, where there was the most progress in the early years of Abdullah’s stewardship, have also slowed.

However, changes to the kingdom’s economic team in December may reinvigorate the process. Former central bank governor Muhammad al-Jasser was made economy and planning minister, which may give him scope to promote broad changes, and was replaced as governor by Fahad al-Mubarak, who might bring a more market-oriented viewpoint given his private-sector background.

Politically, King Abdullah has barely altered the Gulf monarchy despite petitions by democracy activists, liberals and Islamists calling on him to allow elections and more freedom.

Saudi Arabia’s only elections are for half the seats on municipal councils that hold little real power.

In September, King Abdullah announced that women would be allowed to participate in future municipal elections and be included in the appointed Shura council which advises the government on making new laws.

However, a campaign by some women to win the right to drive was suppressed by the government and some of the participants were arrested. One was sentenced to 10 lashes but a senior princess said King Abdullah had reversed the sentence, which has not been carried out.

King Abdullah’s handouts focused on social largesse and a boost to security and religious police, but included no political change.

– Any signs of protests or petitions by activists demanding political reforms.

– Any approval of a much-delayed mortgage law, which aims to ease pressure on the housing market, or an announcement that the stock market will be opened to direct foreign investment.

Saudi Arabia, a Sunni-led regional power, has sought to contain Iran’s influence since the 2003 U.S.-led invasion of Iraq produced a Shi’ite-led government in Baghdad.

The Saudis sent more than 1,000 soldiers into Bahrain to protect government facilities after an uprising backed by the island country’s Shi’ite majority. The kingdom announced a drawdown of troops in June, after Bahrain lifted its state of emergency.

Shi’ites in the kingdom’s Eastern Province, which lies next to Bahrain, have held a number of protests calling for prisoner releases.

Saudi Shi’ites have long complained about marginalisation and have started small protests to demand t
he release of prisoners they say have been detained without trial. Riyadh denies any charges of discrimination.

Riyadh also shares U.S. suspicions that Iran aims to develop nuclear weapons. The United States and Israel have not ruled out pre-emptive military action against Iran, which says it is developing nuclear energy only to generate electricity.

Saudi Arabia has publicly tried to stay out of the dispute over Tehran’s nuclear programme but a series of U.S. diplomatic cables released by the WikiLeaks website portrayed Riyadh as pressing for a U.S. attack. King Abdullah was said to have “frequently exhorted the U.S. to attack Iran to put an end to its nuclear programme”, one cable said.

– Any signs of further protests and a deterioration in the Eastern Province.

– Any Saudi diplomatic moves to tighten sanctions on Iran and any signs of Saudi facilities offered for military action.

Saudi Arabia, with the help of foreign experts, managed to quash an al Qaeda campaign from 2003 to 2006 that targeted expatriate housing compounds, embassies and oil facilities.

Riyadh destroyed the main cells within its borders. But many militants slipped into neighbouring Yemen where al Qaeda regrouped to form a Yemen-based regional wing that seeks, among other things, the fall of the U.S.-allied Saudi royal family.

The Yemen-based al Qaeda arm shot into the global spotlight after it claimed responsibility for a failed attempt to bomb a U.S.-bound passenger plane in December 2009.

Despite the U.S. killing of al Qaeda founder Osama bin Laden on May 1, 2011, and of Anwar al-Awlaki, a key member of al Qaeda in Yemen, in September last year, the militant Islamist group’s Yemeni wing is expected to remain active and exploit political instability in Yemen.

– Whether Islamist militants gain more ground in Yemen, where they have taken advantage of the chaos as the government faces off with opponents, and vow to turn their attentions to Saudi Arabia.

– Signs of more concrete action from Riyadh to build a fence it has long talked of to seal the mountainous 1,500-km (930 mile) Yemen border to stop drug traffickers and militants from crossing.