Passing On The Parcel - Gulf Business 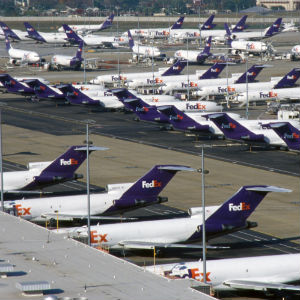 Globally, the largest courier companies are the US’s United Parcel Service and FedEx corporation, which together control just under half of the global market, mainly due to the size and dominance of their domestic arena. Deutsche Post AG, which owns DHL, is only about a third of the size of one ofits US rivals. The size of the global industry is around $190 billion and is expected to grow at 3.6 per cent per year in the five years to 2016.

“IBISWorld estimates that industry revenue will… over the five years through 2016 amount to $225.5 billion. Demand for high-end, time-sensitivegoods will grow.

“Many manufacturers will use air transport to ensure that their products reach customers on time. The development of global e-commerce and manufacturing trends such as just-in-time delivery, which requires materials to be shipped to strict timeframes, will back growth in courier revenue,” the company’s Global Courier and Delivery Services World Industry Report, published in September 2011, said.

The Middle East has been a growing market for many players in this industry, says a report by US research house IBISWorld. It said international air cargo in and out of the region would account for 5.8 per cent of global tonnage in 2011.

“The growth in the Middle East market stems from its robust GDP growth and high oil prices that created additional spending capacity for the region’s oil exporting economies. In addition, there are also indications that many countries in the region are opening up avenues for investment, which could further increase the economic competitiveness in the region,” IBISWorld said.

Regional courier companies say that they have not experienced the adversity seen in other sectors, and instead are quite bullish about the recent past and near future. The UAE logistics market has grown from $6.35 billion in 2009 to $7.03 billion in 2010, information provided by South African logistics player Barloworld indicates. DP World [container] volumes in Q1 2011 went up by 15 per cent and 16.6 per cent in Q4 2011 as compared to
2010, Barloworld said.

“The 2008 global economic crisis came into the Middle East at the end of the first quarter, 2009,” says Frank Uwe-Ungerer, DHL’s UAE country manager. “It was not a downturn, just a slowdown, a change from hyper to flat growth. In the UAE, it was not as severe as in other markets. In terms of global air freight [from the Middle East region], we are growing at strong double-digit rates in the UAE, Saudi Arabia and Qatar. We see very strong numbers in 2011, as the market gets back to growth and our internal success [continues].”

The decision-making process has changed from head office only to a situation where power is coming into the UAE, DHL said. There is a desire to move into quality services, as well as much higher cost consciousness on the total logistics spend, said Uwe-Ungerer.

“Email has changed the landscape and our document shipments are still growing. But documents are not growing at the same speed as parcels.”